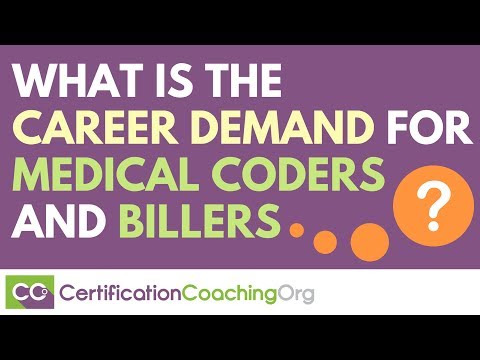 Laureen: Let’s move on to the next question. What is the career demand for medical coders and billers? We feel it’s a huge demand. The salary surveys from AAPC and different organizations show that there is a definite increase. I think there is a lot of turnover with ICD-10. A lot of older coders decided that was their queue to maybe leave the industry and retire, and a lot of the new ones coming in are filling their shoes. I feel it’s a high demand profession. Yes, you get the typical “It’s hard to find that first job because they’re looking for people with experience.” But that’s true of any career field that you try and break in to. The newbies have it the hardest. But every person who has a job currently started somewhere. Someone took a chance and hired them. You just have to work extra hard for that first job. Once you get that first one, then you’re in the door and you can parlay that for your next job and then it gets pretty easy.

Alicia: I would add also that specializing is also a good thing too to make you more marketable. But it doesn’t matter. You have to market yourself. If you don’t network and market yourself, it is just a way of life when you’re getting a job nowadays. There’s lots of educational and helpful tips on YouTube and some resources out there. Take some time to look at that, how to get a job, not just a coding job and take those into consideration.

I think it was January’s AAPC magazine had the salary survey come out. If you guys had a chance to look at that, that’s always interesting to see how it changes. It goes up every year. They give a percentage of the increase from the previous year.

Laureen: AAPC has this section here in the resource section on their salary survey. You can go in there. I’ll put that in the Facebook chat.

Alicia: If you’re certified with them, they send you a survey every year. It’s really a good idea to fill that out because it helps portray—that’s what they’re basing their data on is people like us who fill that out.

Laureen: Here this is basically that we’re going over. What is the current outlook for the medical coding industry? According to the Occupational Outlook Handbook, which is always a couple of years behind, that’s where they’re quoting 2012 and 2013 published by the US Department of Labor estimates of growing job market as industry employment is projected to grow by 21 percent. That’s a lot. That’s significant. In addition to these new jobs, there will also be open positions as people retire or leave the profession, a high demand for coding services as the healthcare industry continues to grow and the country’s population ages. These baby boomers are going into the Medicare ranks. In addition to that, you want to keep in mind… I just totally lost my thought.

Alicia: With ICD-10, everybody talked when it was going to roll out the first time and that all these people set up their retirement. I’ve been coding for 20 years and there’s no reason for me to stop. I just don’t want to learn a new code set. And then they didn’t retire. ICD-10 when it came out wasn’t as bad as everybody thought, some of these people. They did stay but they took on supervisory roles, most of them, and new coders came in. But they’re still filling that up trend, don’t you think, with the new code set. I think we got through a year. Most of the complications were weeded out relatively quickly and they’re starting to hit their stride. But there’s still a demand because of ICD-10.

Laureen: I remember my thought. What I was going to say was that the title sometimes that you search for isn’t always medical coder. Medical coding might be a function of the jobs. You might have to expand and search unrelated titles. It could be front office personnel. It could be office manager where they have to know coding as part of their job. Be open to looking at different types of job titles.

Alicia: Yeah. That’s really important. That’s another thing that you can do to help yourself is how do I look for jobs in this career field because there’s people out there that specialize in teaching you how to do that.

This segment “What is the Career Demand for Medical Coders and Billers?” originally aired on Live with Laureen #014 on January 12th, 2017.