Alright, coding for physicals. There was a question that had come in regarding V70.0 versus V72.3 and there’s another digit that would go with that. By the way, whenever you see that “x,” that’s what that means. That’s an optional digit. 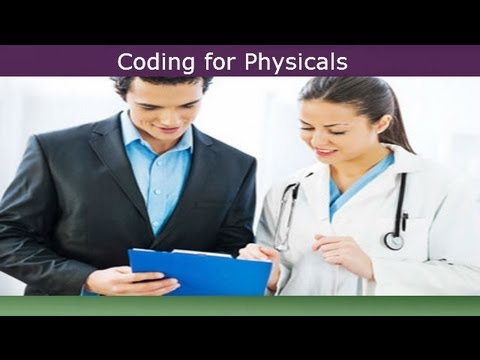 So, Sharla had asked: “When patient presents for annual physical and has GYN components to the exam, which ICD-9 would be used as primary diagnosis, V70.0 or V72.3x? There is conflicting information out there on this subject; it seems some folks use both codes with V70.0 as primary and some only use V72.3x?”

Let’s go look at our slides. What is actually V70.0? It’s a routine general medical examination at the healthcare facility. This is really a common code and I know you’re not supposed to memorize codes, but this is one you’re probably going to memorize if you’re working in a physician’s office. It’s a health check up. This is what your patients are going to be coming in for various reasons. Now, this excludes certain check-ups though.

So, if you’re doing check-ups for infants, you’ve got this age – makes a difference. And a lot of codes are separated because of age. In fact, I talked with a student today when we were doing a conversation and she was getting ready for the test and I said, “Whenever you see a question and it has somebody’s age in there, pay attention. It may be pertinent. It’s not always, but it may be pertinent.”

So, in plain English, let’s see what this says. This code is not for infants or children, health check-ups or supervisions for infants are reported by age in days: newborns, under 8 years old. Then again, it repeats those numbers that correlate with those ages. So, if you’re doing pediatric coding, you’ll be seeing these V20 numbers.

As we scroll down just a little bit, let’s see what the difference is. V72.31 – routine gynecological examination. Now, your general gynecological examination is going to have usually your Pap smears; that’s the fancy name for it. They do a pelvic exam; if you’re going to do some additional screening and everything, you can add more codes to that.

But in plain English, let’s see what that says. So, your routine gynecological examination means a general, annual, or periodic examination and it lists what’s included in that. Now, additional codes, again are listed. Edited as:  The question is: might I have to do those separate?

Now, ask yourself, the patient came in, you need to know to get the best code: What’s the patient’s age? What CPT are you using? That will make a difference on which ICD-10 code that you’re using and what type of a visit is it. So, if we go back and we revisit, the patient comes in for a routine physical, but there’s a gynecological component. In other words, they come in, they’re scheduled for a routine visit, and then all of a sudden, she says, “Oh by the way, I’ve been having a lot of cramping lately with my cycles and it’s becoming a problem.” So, the doctor addresses that in a gynecological aspect. You don’t use that other V code for the gynecological visit, it’s a separate visit.

So, the one that she is giving, I would say it’s the regular V70.0, he just addresses it. You can use additional codes to describe what he addressed. If he’s doing the gynecological visit and he addresses something specific that’s above and beyond a regular visit, then he does get paid extra for that. But I think you can handle that with modifiers.