Q:  Coding Modifiers 58 and 59 — “Can you give me examples of situations that need medical coding modifiers for CPT… especially 58 and 59?”

A:  That’s a very, very broad question. This question was designed to be answered in 5 to 7 minutes, so I can’t go through every single modifier; however, we do have an on-demand webinar, and we’re going to have that modifier webinar coming up next month. So, join us on that and I’ll go over every single modifier and appendix A of the CPT manual.

But since you asked for 58 and 59, I’ve got some specifics on that. Here is a copy and paste from my appendix A of CPT, that’s where medical coding modifiers live. Some people don’t even realize that when they’re brand new at coding, they see the little shortened list in the inside cover of CPT, but they actually live in appendix A. That’s where you want to go and make your notes and really go look at the full blown-out definition of the modifier. 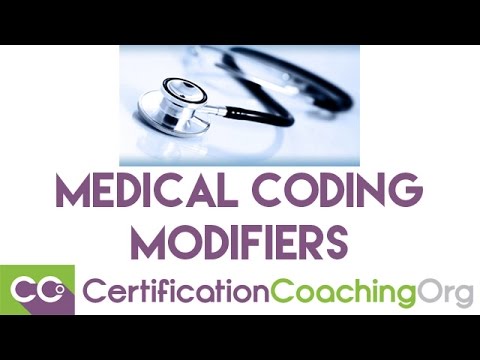 Here’s modifier58 with all my chicken scratch here: Staged or Related Procedure or Service by the Same Physician or Other Qualified Health Care Professional during the Postoperative Period. My little “GP” is my reminder that this is a global package modifier. If I’m not in the global period for this particular patient, then this modifier doesn’t even apply, don’t worry about it. But if you are, and now you’re doing a second stage procedure or related procedure, then you would want to use this modifier on that second one. Because what happens when you’re in a global period, the payer, whenever another claim comes in by that same physician for that same patient, they’re going to bat it back at you and say, “Nope! Global period, we don’t pay for it.” So, you have to use this special modifier to kind of unlock the door just to get the claim in to be considered.

Another example could be cleft palate repair where they can’t fix it all in one operative session. They’ll do phase 1, and then will come back and they’ll do phase 2, and phase 2 is normally within the global period of phase 1. Let’s say it’s 90 days and they’re coming 45 days after and they’re doing the second stage. That’s when you would use a modifier 58 to get it in through the door.

The next modifier that was asked about is modifier 59, Distinct Procedural Service. Under certain circumstances, it may be necessary to indicate that a procedure or service was distinct from or independent from another procedure on the same day. This is like a type of bundling modifier and the example I have here is an oophorectomy, 58940, where they’re removing the ovaries.

Now, part of coding that we learn is that the approach is bundled in, so in order to get to the ovaries, you have to open up the abdomen and go in and excise the ovary. So, that opening of the abdomen, which is a laparotomy (“laparo” means “abdomen”; “otomy” means “cutting into”) is part of the bigger procedure of oophorectomy.

I actually had this happen to myself, a couple of hours after the surgery, I had unusual bleeding or something going on and they had to take me back and do an exploratory lap to see what was going on; so I actually had two laparotomies. So, the laparotomy code is 49000 and in order to report that properly, a modifier 59 will be put on to say that it was done at a separate time. That’s a way to use modifier 59.

Sometimes when you do lesion excisions, the simple repair stitches is included; but if you did several lesion excision, maybe you did stitches too for something else on the same arm, so there’s no other modifier you could use to say RT, LT or to differentiate it, because technically, modifier 59 is a modifier of last resort. If there’s any other modifier or any other way to tell your story, you’re supposed to use that method versus 59. So, that would be a way to distinguish a true simple repair from one that’s bundled in with the lesion excision.

Again, documentation is always going to be needed to be at the ready if you get asked for it. Modifiers are basically kind of like doing our taxes, we don’t send in our receipts to the IRS, but we sign our name stating we have them if we were to be audited. That’s what putting modifiers on, we’re saying, “Yeah, we understand this special circumstances, we have them and we have proof, we have documentation.” So, if it wasn’t documented, don’t do it.

Someone in the chat was asking about these X modifiers, we went over that a couple of webinars back and we actually posted some information about that on the discussion board. I put the link in the chat. But per CMS, we are to use these new X modifiers; XE, XS, XP, XU instead of modifier 59 if they apply. So, be aware of that and check out our website for more info on it.

Here is just my little reminder, if you want a full modifier presentation, check out this CEU on Demand Class, and that’s the URL. You can find it on our website as well. That’s it for my answer sheets.

Get More Information about Medical Coding Modifiers 58 and 59: