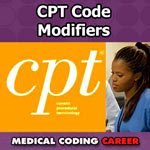 The HCPCS Medicare Level II Manual lists a group of modifiers that many medical coders do not regularly reference unless they are working in a specialized area. Some of these modifiers can be found in your current CPT Manual – although not all.

Two modifiers that generate from the HCPCS Manual are modifiers Q5 and Q6 which are associated with locum tenens and reciprocal billing arrangements. These modifiers should be used if the coder has a complete understanding of the practice’s situation in terms of physician coverage. (Not Physical Therapists or CRNAs)

So how do you code for a locum tenens doctor? A coder and biller will continue to bill Medicare under the regular physician’s provider id numbers (the absent physician). However, two things are very important to keep in mind and it is in everyone’s best interest to have a protocol set up with appropriate documentation in the event of an audit: (1) Add modifier Q6 in box 24 D after the CPT/HCPCS code. (2) In box 24J, the regular (absent) physician’s national provider id number must be indicated. The claim form will make clear the regular (absent) physician’s name and ID numbers, either as a solo practitioner or within a group practice, but the Q6 modifier alerts Medicare that another physician is covering for this doctor. Keeping a log to cross reference the coding/billing will also provide Medicare with information regarding the sixty (60) day limit of coverage. Most state Medicaid plans follow CMS guidelines, but it is always smart to contact your local carrier for specific information. Rules can vary among contracted HMO and PPO plans as well, so again, check your carriers for specific guidelines.

For both locum tenens and reciprocal billing, modifiers Q5 and Q6 must be appended to each line of service.

For additional information regarding these rules, go to the Medicare Claims Processing Manual,
Chapter 1, Section 30.2.11.

You can view additional details online at: http:www.cms.hhs.gov/manuals/downloads/clm104c01.pdf.