Can you discuss CPT stents and cardiac cath coding? 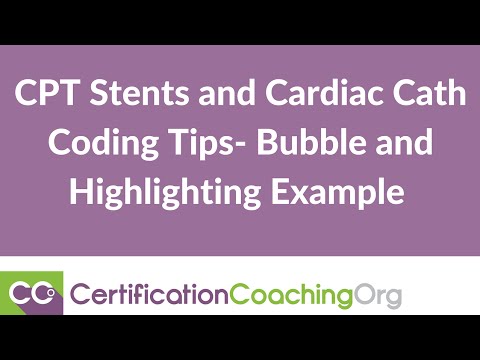 Alright now this is an example of how I teach my review class and actually you know, my regular coding class is I teach with my manual. I have a document camera that’s pointing down on my book and I’m pointing it to the pages. I’m showing you how I marked up my book. It’s called bubbling and highlighting. And these are just some pages on 471 and 472 of the 2011 version and unfortunately for like stents and stuff, they don’t really have a nice header. They say, ‘Okay, here are the you know, the angioplasty codes.’ So what I did is I kind of make these notes down on the bottom and if that’s not showing up, just let me know, Boyd.

So… and there will be a recording of this video made and Boyd, as you probably… many of you already know, you’ll get lots of emails where it’ll say, “It’s ready, it’s ready!” And you can go click on it and review this and pause it and you know, copy these notes down.

So basically, I’ll show you all these bubbles but this is where we want to start here. I have 1, 2, 3 and the way I indented it is kind of key to understanding this as well. So you want to start by putting stents first and then indent it underneath of it. Number 2, your atherectomy and indent it underneath of that. Number 3, your PTCAs or your balloon angioplasty. Now you’ll see here, I wrote stents rule and that’s pretty much how I help my students to remember this is that the reason I put it in this little hierarchy is if you have a stent done and an atherectomy and a PTCA all in the same vessel, the stents rule and then the atherectomy and the PTCA is bundled into it. If you have an atherectomy and a PTCA of a same vessel, the PTCA is bundled into the atherectomy. You never have more than 1 code for any vessel in an operative session, okay? And that’s why I put here 1 code per vessel. Even if all 3 things were done to that same vessel, you’re going to have whichever one is considered the more complex and an atherectomy is more complex than a PTCA and stent is more complex than both of them.

Okay so let me show you the 3 different bubbles here. So I have bubble number 1 for stents and that’s right above it here. So that’s your 92980 and you can see it says Transcatheter Placement of Intercoronary Stent or Stents. Always be careful of your plurals in CPT. So again, we’re talking about one vessel. You can have 3 stents in that one vessel. You’re just going to have 1 unit of 92980.

Okay now my notes in the margin are Include Atherectomy and PTCA. That’s my reminder. And how do I know that? Because it says “With or Without other therapeutic intervention.” That’s what atherectomies and PTCAs are. They’re other therapeutic intervention. And then you have your add on code 9291: each additional vessel. So if you have you know, vessel A gets a stent and vessel B gets a stent then you’re going to have one unit of 980 and one unit of 981, okay? So that’s the stents rule bubble.

Number 2, the atherectomies unfortunately, have to go to the next page. They weren’t laid out very well for me in 2011 and hoping that 2012 book will be better. And here’s the atherectomies, 92995 and 92996 and you’ll notice that it has a bubble around it. It’s part of my bubbling and highlighting technique. And this one says: “Percutaneous transluminal coronary atherectomy”, so they’re removing the plaque, that’s what an atherectomy is. And here I wrote, ‘Includes PTCA” because it says, “With or without balloon angioplasty.” Okay and so then the 996 is each additional vessel.

Okay for our 3rd bubble, it’s the 92982 bubble and the 983 bubble, Percutaneous transluminal coronary balloon angioplasty: single vessel, PTCA. So this one’s bundled into the other tube. The only time you would ever code 92982 is if that was all that was done so that vessel in that operative session. If anything else is done, it’s going to be bundled into it. Okay so one code per vessel.

Now, the little twist to this that get everyone messed up initially, if you had a stent of vessel A and let’s say a PTCA, a vessel B, you actually have 2 vessels that were worked on so you should have 2 codes. So for vessel A, you’re going to have the 92980. That makes sense. Always take your higher value one and code it first. Everything else after that is going to be an add on code. So now, for vessel B that has a PTCA, we don’t code 92982. We have to code the add on code for that one, the 92… I said 3 before, the 92984, each additional vessel. And we can confirm that by looking the parenthetical note. It says, “Use it in conjunction with 92980” that’s the stent code. 92982, which makes sense as the PTCA code itself and 92995, that’s the atherectomy code. So even though a lot of times, we get in the mindset that add on codes can only be used with the code that it followed, that’s not true. 90% of the time, it is but there’s many instances where it’s not the case. So all subsequent vessels are an add on code. It might not be in the same bubble, okay? But that’s my little stent lecture. The stents rule, this is the hierarchy, one code per vessel, subsequent vessels are add on code. And I will try and do cardiac cath next call when I can scan those pages.