Global period, okay. “This question is for Laureen. I know you’ve covered this in your Blitz. Can you go over and explain more in detail again how to answer a 0, 10, 90 day global period question, what keywords to look for in order to draw out the answer? – Jean.”

Well first of all, on the board exams, they are not going to require you to need a tool like better built in encoders and on the CMS website where you can know for sure which CPT code has which number of follow up days. But they might say something like a patient had a hysterectomy and now they’re coming in a week later. You know that they’re definitely within a global period because that’s a major surgery. 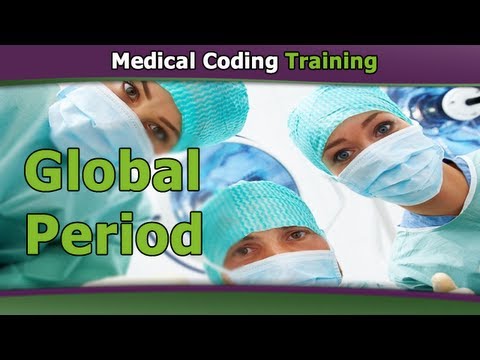 So let me show you how I break it down. Okay, I decided to open it in a different window, hang on. I’m jinxed tonight. So there is a database on the CMS website called the Medicare Physician Fee schedule. Many other private payers use it as well but they don’t always follow it exactly. But at least Medicare does publish it. And in the column where it talks about follow up days, they are 000, 010, 090 and some other notations. But 000 means there’s no global days and these are usually for your minor procedures that don’t break the skin. Maybe they’re just shaving off a mole that’s on the surface of the skin. So if you did come back for follow up to that procedure, the physician would be okay to bill an E&M code. There are no future visits that are bundled into the procedure code.

010 means there’s 10 global follow up days. That’s normally for procedures where there is a break in the skin but it’s not considered a major procedure like a hysterectomy, etc. So any visits where the patient comes in and say, a week after the procedure, 7 days. That visit, you would not bill separately. You would not bill a separate E&M visit. It would be bundled into the CPT code for the minor surgery.

And your 90 day, 090, that’s 90 days, 3 months of follow up visits are bundled into the surgery code. So if there was a hysterectomy or a knee surgery or something major and they have a typical protocol of when they want the patient to come in for follow up… for routine follow up, it could be you know, 10 days, 30 days, 45 days… anytime they’re seen, it’s done like a normal office visit but they don’t bill an E&M code because it’s bundled in.

Okay so the key here… I was going to make a bullet of it but I don’t think I did. It says any routine follow up. If it’s not routine, if it’s a complication then you are allowed to bill an E&M. You’re going to need a modifier to get it through the door but the whole purpose is if you take a step back and you think of these committees creating these codes or revising these codes every year, if they can package something, if something is predictable, they will package it because they want the least amount of codes to tell the story of what they did, as possible. So a hysterectomy has a protocol, has a normal number of follow up. You know, come back in a week, come back in a month. I don’t know what it is but it is predictable and therefore, they can calculate the value of that code and they bundle it all together.

Now there is a code in the medicine section, 99024 – post operative follow up visit normally included in the surgical package to indicate that an E&M service is performed during a post op period for reason related to the original procedure. So even though you’re not going to get money for that code, some insurance companies want to know that visits were being provided. In addition, it’s good tracking in the physician’s office. They need to put something in that the patient was there. And it’s kind of like OB but the reverse. All the pre-delivery codes are bundled in to antepartum care. You use… there’s no fee attached to that code by the way.

Now, if you want to see how this works in an encoder, I’ll show you how it works at Find A Code. And I think this is… yeah, this is going to link me to a vaginal hysterectomy code which we know is considered a major surgery. And most of your encoders have this information built in. In Find A Code, you go to the additional code info box. And all of these fields here are taken from that Medicare Fee Schedule database. And look at here, here is our global days and it’s a 090 major surgery. And they even break it down. They let you know. If you did have to split it up, 12% of the fee goes to pre-op, 74% goes to the operation itself and 14% goes to post-op. That’s how they actually break it down.

So encoders are great for this kind of information. And as you know, we use Find A Code a lot. You can go to Find-A-Code if you want to do a trial and see how that works for you. So that is global period coding. 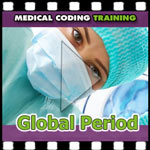