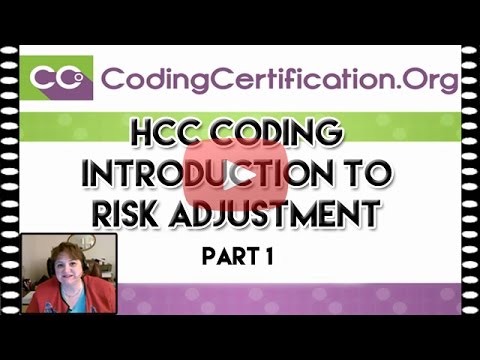 This is Alicia from CodingCertification.org or as we fondly like to call it CCO.

I am so excited to get to tell you a little bit about HCC Coding and risk adjustment coding and the background behind it. There’s a really interesting story behind how it got started. Lets start now and look into that history a bit.

What is Risk Adjustment?

Risk Adjustment (RA), is the methodology utilized by The Centers for Medicare (CMS), to adjust bids and payments to Medicare Advantage Plans (MA), based on a Plans member demographics, which include age, sex and health status of those members. The CMS Risk Adjustment Program is Prospective in nature, which means that ICD-9- CM diagnosis codes from the prior year and demographic information are measured and utilized in order to predict future costs to the Plan by sick members and adjust payments accordingly.

In 1997, the Balanced Budget Act (BBA), was the first year that Risk adjustment methodology for Medicare Advantage (formerly Medicare + Choice) was first required. In the beginning, when CMS first implemented its Risk Adjustment Model, it was only hospital inpatient diagnoses that were gathered and reviewed to determine actual payments to an MA Plan. Then in 2000, along came the Benefits Improvement and Protection Act (BIPA), and Congress decided to mandate ambulatory data to be additionally collected with the inpatient diagnosis codes. This was a gradual integration and wasn’t fully implemented until 2007 with completion of 100% risk adjusted payments for the majority of MA organizations. There were a few demonstration plans, which were not fully phased in until 2008.

The Affordable Care Act prompted yet another shift in CMS reimbursement policy to MA Plans by reducing federal payments to MA Plans over time, which resulted in closing the gap on cost by bringing them closer to the median costs of care under traditional Medicare. Another significant change to the landscape is that MA Plans were now going to be measured on quality within the STAR Ratings program, which meant the bonus structure was changing and over the next few years, only 4 and 5 STAR Plans would receive bonuses as of 2014.

It is important to understand that the CMS Risk Adjustment program is a huge player in the Affordable Care Act’s (ACA’s) ever evolving financial infrastructure and that it plays a critical role in preserving the private insurance market. The Risk Adjustment program is the anchoring process for stabilization under ACA, which is assisting in the overall methodology of factoring the true disease burden of an MA Plan’s members. 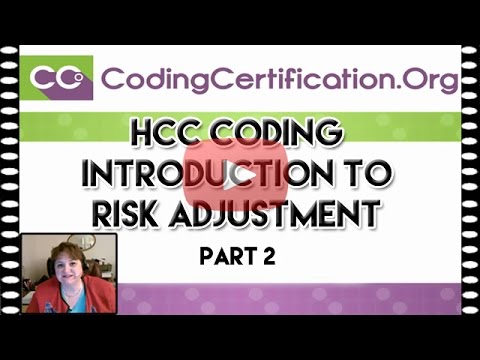 As of 2014, there is an estimated 54 million people in medicare in the US., of those 54 million, about 74% are enrolled in traditional Medicare and the remaining 30% are enrolled with a Medicare Advantage Plan.

Since 2004, the number of beneficiaries enrolled in private plans ha almost tripled from 5.3 million to 15.7 million in 2014.

2014 not only was a new year, but it meant that ACA was fully in effect and with that meant Plan denials for pre-existing conditions and underwriting would now become extinct. There is greater risk for  higher mix of sick versus healthy individuals who are going to be covered by an MA Plan. This means that MA plans are going to have to manage their members care by coordinating with Plan Providers better than they have in previous years, with better MLR management and Member satisfaction for starters.

In order to understand the full scope of Hierarchical Condition Category Coding (HCCs), and become an expert HCC Coder, you must first understand the nuts and bolts of Risk adjustment. Risk Adjustment (RA), is a hybrid of what you may know as traditional capitation. A traditional capitation system for a managed care organization pays a provider or group a fixed dollar amount on a per member per month (PMPM), basis, which includes all services that a plan member may require during a calendar year. A traditional capitation arrangement, will generally set a provider or group PMPM rate based on certain demographic factors that usually include the following:

The Medicare Advantage Risk Adjustment payment methodology, takes traditional capitation and adds in additional dollars for those members who have active Chronic Conditions and are higher in cost to treat. RA uses a classification system that takes a member’s illness and groups them into what are known as Hierarchical Condition Categories (HCCs), which in turn have a relational value to over 3000 ICD-9-CM codes (3166 for 2014). An HCC code is similar to facility based Diagnostic Related Groups (DRGs), which are used to determine hospital reimbursement. HCC codes payment methodology is based on diagnosis codes; DRG codes are based on CPT 4/Procedural codes.

Medicare Parts A, B, C & D – Medicare is a federal health insurance program that consists of 4 parts

Is different from traditional managed care, whereas Plans are reimbursed higher for sicker members, versus being reimbursed for higher for healthy members in the latter. A provider may treat a member whose chronic illnesses fall under several HCC’s and for those HCC’s that fall under a different category within the 79 HCC groups currently

Part A and B Services 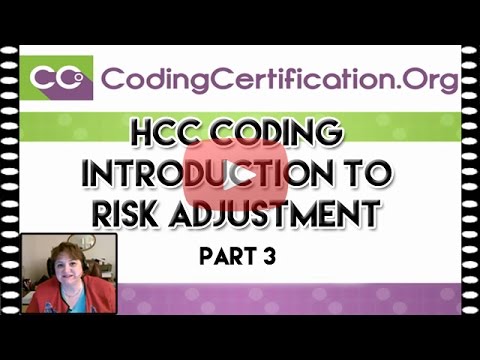 There are several types of MA Plans that are offered to potential enrollees annually to deliver benefits, including various HMOs, PPOs, Private Fee-for-Service (PFFS), etc. In 2014, HMOs dominated the market, followed by PPOs, as follows:

Were initially established so that rural beneficiaries would have greater access to Medicare Advantage plans. Regional PPOs can either provide coverage statewide or can cover multi-state regions and they accounted for approximately 8% of all Medicare Advantage enrollees in 2014.

Initially established in 1997, they did not have to sustain existing networks, however, since 2011, that has changed and they are now generally required to do so. Enrollment in PFFS enrollment skyrocketed from 2005, where it went from 0.2 million enrollees to a staggering 2.2 million in 2009, but took a dramatic downward spiral since then, with an overall enrollment of 0.3 million as of 2014, or roughly 2% of the market for total Medicare Advantage enrollees.

Other types of private plans

There are several other types of Private Fee-For-Service Plans (PFFS), such as cost plans, Program of All-Inclusive Care for the Elderly (PACE), Medical Savings Accounts (MSAs) and so forth, which account for about 3% of total private plan enrollment 2014. This is broken down further in a few states like Minnesota, where there is a larger percentage of the market that enrolled in private cost plans. Private Cost Plans are reimbursed based on what is considered the reasonable and customary cost (R&C), for services and do not assume risk, like an MA Plan.

SNP members are generally significantly sicker than the median MA Plan member and are in a higher risk pool for the Plan and thus require more healthcare dollars to cover the cost of their care. So a SNP model was put into place to allocate additional MA Plan dollars from CMS to care for these members.   As of 2006, overall SNP enrollment has expanded significantly from roughly 0.5 million to an astonishing 1.9 million enrollees as of 2014; with SNP enrollment for dual eligible, weighing in at roughly 82% of total enrollment.

Typical members in a Special Needs Plan or (SNP), which is an HMO MA model, and is restricted to these types of members due to higher risk and cost for care:

Okay, that’s it, Brief overview about the history of HCC and Risk Adjustment how it started and how it’s divided and looked at as you could see by the number its growing, it’s really growing and I just personally forsee this is becoming a huge market for coders as well as compliance officers and auditors so I hope you enjoy the introduction and get more information about HCC which is not easy to find in the information out there. Thank you again!! If you have any questions just let us know at CodingCertification.Org