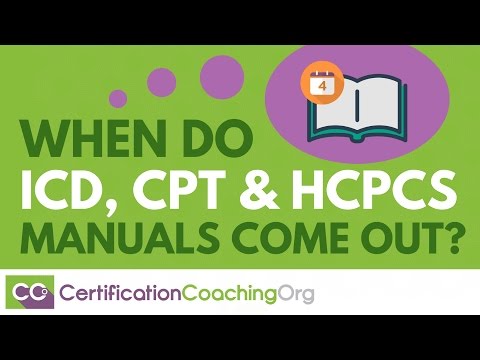 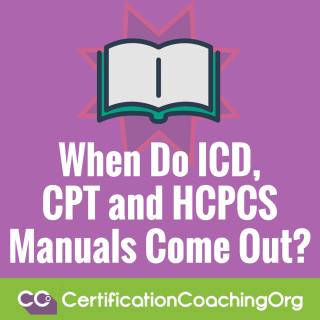 ICD comes out in the summer, like early August, and they go into effect September 1. Some of them will come out even in June and July. The problem is that the guidelines were always a year behind. So, the codes themselves and the descriptions and the Index, that’s all up to date; but the guidelines in the front, just to be aware, they’re probably not the same year as what is printed on the front of the manual. If it says 2017, you probably have 2016 official ICD-10 guidelines; so be aware of that.

That’s usually not an issue because ICD guidelines don’t usually change; however, this year, for 2017, there was some significant changes, we have our update that we did. But this is the way it’s always been, so you don’t have to freak out about it, you just go in and make adjustments in any notes when you go and watch our 2017 ICD-10 updates.

CPT Manuals come out in October and those codes go into effect January.

Finally, let’s talk about HCPCS Manuals. This is really why we’re doing this because everyone is like, “Where’s our HCPCS book? I ordered all three books at once and I don’t have HCPCS.” It’s always behind. It comes out in December. I think they’ve started to ship now, and they go into effect January 1, so we don’t get as much time with that manual, but that’s just the order: August, October, December and ICD goes into effect September 1, and CPT and HCPCS goes into effect January 1.

Just so you know for the HCPCS, for the CPC exam, there are only five questions over HCPCS, for us it’s chapter 6. If you become a student and you say, “I haven’t got my manual yet.” It’s not until chapter 6, so you have plenty of time for it to arrive.

We hope that helps explain when the ICD, CPT and HCPCS Manuals come out.

The “When do ICD, CPT and HCPCS Manuals Come Out?” video segment was originally shown on Live with Laureen #010.