Alicia:   Sure! History of Cancer – again, this is a V code. We’re dealing with a V code here for history of cancer.

A: This can get really confusing especially when you’re just starting out in coding and Laureen and I had a discussion on this last month where I thought something was done a certain way because that’s the way I had been taught, or either I had seen a part of the guidelines that I’m going to show you. Then, I went back, she reminded me. I’m the ICD person and she’s more of the CPT, and she’s like, “I know this doesn’t sound right.” So I went and really did some more investigating. I even double checked with Jo-Anne who you met earlier, said, “Is this the way you see this too?” Again, she confirmed.

Understanding Primary, Secondary, and Personal History of Cancer – The three things you need to know is it active primary cancer? Does the person has the cancer now and is being treated for? Is there active metastasis? Metastasis means that it was in one part of the body and it moved to another part of the body. Then, active treatment – is something going on that is actively being treated? This can be even treatment that’s being done after the cancer is eradicated and there’s medication that’s called tamoxifen that is given for breast cancer after they’re not showing any breast cancer, but I kind of think of it as they’re going to nip this in the bud so they have you take tamoxifen for five years. That’s the three things you need to think about when we get into these sections.

There are two major guideline areas that we need to go over when we want to understand the history of cancer and how we code for that, as well understanding the primary, secondary portion. The first one is section I.C.18.d.4, and we should probablydo a slide sometime on how to find guidelines with this, this little sequence here, that would be a good one.

Personal history codes explain a patient’s past medical condition that no longer exists and is not receiving any treatment, but that has the potential for recurrence, and therefore may require continued monitoring. 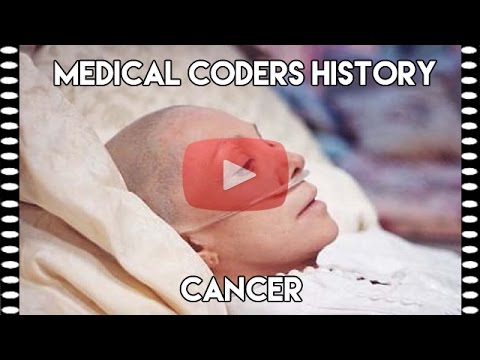 What that means right now is that if your person had breast cancer, they’ve never had cancer before, but they’ve been diagnosed with breast cancer. They did a mastectomy, they went through their tamoxifen and it’s been excised because they had a mastectomy. That’s been eradicated completely, they went through five years of tamoxifen and there’s no other sign or symptom of any type of cancer for the breast. Then, you can use a V code, a personal history V code. Let’s see, that would be a code from category V10.

Unlike up here in this section where they’re talking about, you’re no longer getting any treatment to be able to use a history code. Cancer is a little bit different because you can have cancer come back and it would be considered a metastasis no matter where it went in your body, and they know there are cancers that if you’re going to get another cancer, they’ll say, “Well, this particular cancer if you get another cancer it’s going to be the bone or the brain,” because statistically they know that because of the coding that’s been done. Or they may say, “If you have this particular cancer, it’s going to go in the lung, it likes to go there.”

I came up with some scenarios and let’s talk about them. This is Mrs. Green, I always like doing colors. Mrs. Green in the first case, diagnosis: “Mrs. Green is a 45-year-old female status post mastectomy for breast cancer. Continue current treatment of tamoxifen.” She’s had a mastectomy, it’s been removed but she’s actively being treated with tamoxifen. Let’s say she doesn’t have cancer, and yet, there’s active treatment that is targeted for that cancer, and that’s going to be 174.9, malignant neoplasm, breast, female – because there’s a code for males having breast cancer. If you didn’t know you need to be aware of that – unspecified, straightforward.

Now, let’s change this. Let’s say this is much later in life: “Mrs. Green is an 85-year-old female status post mastectomy for breast cancer. No current treatment. Biopsy for lung cancer is positive.” So she came in and they took down her history, they know she had a mastectomy at one point, but she’s not getting any treatment anymore for the breast cancer, but now they’ve got a positive diagnosis for lung cancer.

How do we do that? The secondary malignant neoplasm is the lung, it’s not the first cancer that she had, it’s a second cancer; so it’s going to be 197.0 and you code that first. But she has personal historyofbreast cancer that’s getting no treatment whatsoever. That would be the V10.3. So now you’vepainted the history, you have told statistically that Mrs. Green had breast cancer at one time in her life and now she has lung cancer.

Now, let’s talk about Mrs. Green at 49: “Mrs. Green is a 49-year-old female status post mastectomy for breast cancer. Patient currently is taking tamoxifen. Biopsy returned from path positive for lung cancer. ” That changes things a little bit, right? She has a secondary malignancy and that’s 197.0 (secondary malignant neoplasm of the lung) and she is still actively being treated because of the tamoxifen for the primary cancer, even though she’s had a mastectomy and she doesn’t have any sign of breast cancer anymore. That would be 174.9. It’s not a history because she’s still in that common five-year time that she’s taking the tamoxifen.

These are just little snippets, you could probably say, what if, what if? That’s not what the purpose of these examples are for; they are strictly to show you what would be the code for a primary cancer. What would be a code for a person that has a secondary cancer, but they had a history of a different cancer; and a person who has a secondary cancer, but still getting active treatment for the first cancer.

Again, it can get a little confusing, but statistically I think it helps sometimes. To back away, say, “It’s not about getting paid, it’s about we’re trying to paint a picture and tell a story so that in the future we can see what works and what doesn’t work with cancer.” Again, that’s why I think they have people stay on tamoxifen for five years.

AAPC – When is Cancer Consider History Of???