A: Last month, I gave us a coding scenario and I had a level 3 office visit, no modifier, and the patient had a rapid strep test and I added the modifier QW to the rapid strep test which was 87880. A lot of people wrote in and said, “What the heck is QW and how do you know when to use it,” and it was very confusing. Even though you study that for the CPC exam, unless you work with it every day, it’s just something that is not that important to you, but it is [0:32:53 – rarely] important.

CLIA means Clinical Laboratory Improvement Amendments, and most medical practices, they apply and pay for CLIA waived certificates. They are given a number that indicates that they have a CLIA waived certificate. The rapid strep test, for example, is a CLIA waived exam and if you bill it without that QW, you are not going to get paid. But, the thing is, is that, there are HCPCS codes and there are CPT codes, and the CLIA waived certificate is for the doctor’s office who does basic urinalysis, urine pregnancy test, stool guaiacs, the simple glucose – the blood sugar test. Things like that, nothing extensive.

But, what you really need to do if you’re a manager or if you have anything to do with the coding and billing is that you have to go on to the website, CMS.gov website, and save on your desktop the list of the CLIA waived lab tests that the physicians can bill for. They are constantly updated and there are a ton of different manufacturers. What I highly recommend is that if a doctor is doing a test or even if they’re ordering medicine, or anything, get the invoice from the manufacturer so you know the dosage, you know the type of test, you know everything, and how much it cost the physician. So, that’s very important. 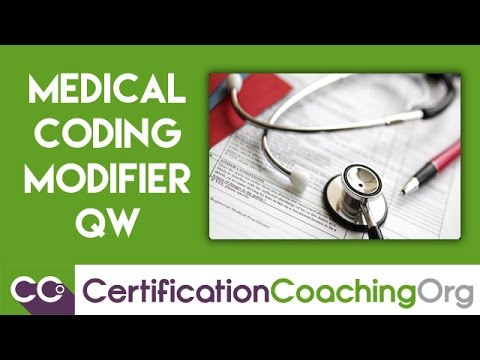 One of the things that I do want to stress is that not every CLIA waived procedure requires a QW, and an example that I’ll show you in a minute is urinalysis, 81002. It is CLIA waived, but there is no QW that’s required for it. And you’re not going to know that unless you have that table, that list, of all the lab test that someone with a CLIA waived certificate has.

The other thing to remember is that the CLIA number goes in box 23 of the claim form and its electronic equivalent. You may have the QW on the appropriate CPT code, and you may not, whatever; but if you don’t have that clear certificate number in box 23, you’re not going to get paid regardless. If you use the urinalysis and add a QW, it will be denied because it doesn’t require it. If you use the rapid strep and you don’t put the QW, it will get denied because it requires it; so you need that table. Just know what test that your office does. Look them up, match it to the manufacturer, and you’ll have your information.

Once you put the CLIA waived certificate into the computer system and link it to the office location, it’s a one-time deal. You don’t have to do it every single time. It automatically will go. So, if you have a problem with a denial, make sure that it’s all connected, when you bill electronically. That’s really important and remember that; if it doesn’t require, it could deny.

Also, you have to know your pay rules because some insurance – I don’t want to say BlueCross, BlueShield, but I think it is – they bundle the urinalysis into the office visit. But if it is a CLIA waived test with Medicare and it’s allowed and it denies, you can’t bill the beneficiaries; but there are number of reasons why it could deny so you want to make sure that you’ll either have the QW or don’t. That type of thing.

I have this, the online Medicare CMS Internet-only manual (IOM) publication 100 – 04, chapter 16, section 70.8. There’s all information about The CLIA waived tests there, and there should be a little further up on the screen two web pages that are cms.gov that gives you the CLIA webpage and the waived test list. These are the two where you can get all that information. The most important to me is the CLIA waived test list.

And I can tell you that there is a question on, some publisher published a question about the 81002 as a CPC question, and the answer they gave of the urinalysis required a QW. That’s not true. If you look on the CLIA waived test list, you will find that it does not require it and neither does the pregnancy test.

So, if you move down, the – TESTS GRANTED WAIVED STATUS UNDER CLIA right here, this is just a very, very small example. The list is probably an inch-and-a-half thick, all of them. The first example I have, and this is what it will look like, but it will be pages, 81025, this is a CLIA waived test, no QW required. It’s urine pregnancy tests by visual color comparison. The manufacturer is various, that’s how it’s listed. Then, it says, what’s the use, it’s for pregnancy.

The next one, CPT, is the 87880QW. The test name for this is Abbott Signify Strep A Test (throat swab only), and I only listed one, but there’s probably 25; where it says various, Wyntek Diagnostics. This is used as rapidly detects GAS antigen from throat swabs. But again, I just listed one. When you look up 87880QW, you will see a whole list of manufacturers.

The last one is a HCPCS code. It’s G0434QW. This test may not be covered in all instances. You want to contact the Medicare carrier for claims instructions. I have learned over the years that the various jurisdictions, they vary, that local coverage determination or whatever. You have to call; if you get denied, call. Find out why, and then it may just be your jurisdiction for billing that this particular code is not covered. But what happens in Massachusetts may be totally different in California, so you really have to know from where you live what you can and cannot bill for, though the rest of them is standard, those are across the board but this particular HCPCS code is [effy -0:39:56]. There are many manufacturers for this QuickScreen One Step Amphetamine Test. I just use the manufacturer Phamatech; the use of this test, the screening test for the presence detection of amphetamine in the urine.

Again, you have to check, and then when you know – I just have a little booklet of all my little cheat sheet pieces of information and that’s how I know because there’s too much to remember. But that waived test list is really, really important. You go get denied if you put a QW where it doesn’t belong, like, on the pregnancy test; so you want to be sure you have that right.