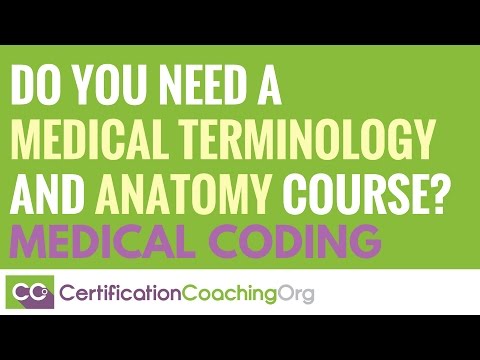 Laureen:   A related question to that is: Do I need to take a medical terminology and anatomy course? You don’t have to, it’s highly recommended because basically, just like we said, if you’re going to be that translator and you’re translating the medical record into codes, if you don’t know the first language, it would be like someone saying, “Laureen, you’re not going to translate Spanish into French.” Like, Wait a minute, I got to brush up on my Spanish first and then I’ll work on learning French.” That’s what new medical coders are doing, is they’re learning two languages. They’re learning the first one and they’re translating into the second.

Alicia:  When people would call and ask me and say, “Well, I just don’t think I need a medical terminology and anatomy course. I took it a long time ago; I had it in high school. I had a health occupation class.” Then, I would ask them, “Tell me, do you know what a cholecystectomy is?” That usually makes them think. If they can say, “Well, I know an ectomy is you’re removing something.” I say, “OK! You’re halfway there.” “Are they removing part of the colon?” Because they think cholecystectomy; then I’ll say, “See? It’s removal of the gallbladder. The knowledge of that root word is very important, so therefore, you probably need to go ahead and brush that up.”

Then, you have to think about speed. You’re given 5 hours and 40 minutes to take this CPC exam. If you are stumbling or you have to pause and think about, “Now let’s see, what body part was that associated with?” You’re shaving seconds to your time, and you want to be savvy, you want to give yourself all the advantages. Then on top of that, the real perk is it’s worth 40 CEUs; so after you’re certified, that’s more than you need in two years. You start out with 38 or prorates, but 38 every two years with one credential. Again, right there it’s paid for it.

Now, there’s another perk to this course, the medical terminology and anatomy, a lot of employers will pay for this. Let’s say that you are thinking about picking up a second credential. Say you’re a CPC and you think, “I really like the risk adjustment. We’re having to deal with this in our office, it’s all about diagnosis coding and the disease process. Should I take the medical terminology and anatomy?” Yes. Tell your employer. Every couple of years, a lot of employers will invest in their staff and say, “Why don’t you take an MTA class and brush up your knowledge,” because it’s going to benefit the employer just as much as it’s going to benefit you personally in your career. It’s not as expensive and it’s a tax right off for them. Again, it doesn’t hurt to ask, so know that it’s beneficial. All of your training is a tax right off, if I remember. Ask your tax people. Don’t skimp on taking the medical terminology and anatomy. Really, the only people that I would say, “OK, you don’t have to take it,” would be nurses and sometimes transcriptionists.

Laureen:  And even for them, I tell them to at least get the textbook. Maybe on this course where you hear us lecturing on it, but get the textbook, because the textbook is written for coders by coders; they tie it into the ICD-10 coding system. It’s definitely worth having on your bookshelf to do a refresher.

Alicia:  I was talking to an RN today. RNs have had the medical training and everything; but a lot of RNs are all about documentation now so she was wanting to do something else. She said, “I think I want to take the MTA course.” That’s exactly why she wanted…

Laureen:  That’s what I was going to say, now with this new credential, the CDEO, that is clinical. It’s like on the inpatient side, they’re called CDIS (Clinical Documentation Improvement Specialist). They need to know the disease process really well because they’re basically querying the physician trying to pull out information that seems to be missing from the medical record, so they have to have this clinical understanding. So, you got to start with medical terminology to even understand that, and anatomy and physiology and we’re working on a pathophysiology course as another ancillary course to help support these new types of roles that coders are getting into: the CDEO, the documentation improvement specialist, the risk adjustment coders, they really need to know. Or I should say the more they know about the clinical side, the better abstractors they are. They know how to go right and find it. They see lisinopril, they go, “Hmm, that’s a high blood pressure medicine. I didn’t see a diagnosis, let me check real quick. Oh, there it is buried,” but because you were digging for that little gem, you found it. It makes you a better abstractor.

Am I getting better explaining risk adjustment?

Laureen:  That’s going to be my next credential.

Laureen:  Well, I have to say I love ICD-10. The change from 9 to 10, I just love the logical layout and it really appeals to me.

Donna is asking is the MP textbook updated yearly alongside the ICD-10 manuals? Yeah, maybe every other year it depends on the publisher on how many changes, but I think we’re up to the third edition now with that book.

Alicia:  The previous edition didn’t have the pharmacology chapter, or the pharmacology insert. It’s not really a chapter, it’s like 3 or 4 pages, but they didn’t have that knowledge in there and it’s so important to be savvy with that. They keep doing a little bit improvement, but this is a really good publication that a lot of university uses, we used to at the college that I taught at.

Laureen:  Lupita is asking: “I went to college for an associate’s degree in billing and coding and planned to get both credentials. Do you think getting both credentials as worth it, or would CPC work for both?” We are big believers in multiple credentials. We just feel that it’s an individual decision on what that second one is going to be. We really believe the CPC should be your first one. Not everybody, but I would have to say 99% of my conversations, because we do free 20-minute consultations, career advice, we help you explore the alphabet soup and find out what interests you.

I can’t tell you how many people in the last six weeks alone where they’re really on a super tight budget, but they wanted to do a course, right now are going to be going up January 1, and they’re like, “I got to do one course before the prices go up. What one?” So, we’ll start talking and they’re like, “I’m on a budget.” I said, “What if you did risk adjustment first then consider CPC?” Because with risk adjustment it’s one code set, it’s ICD-10, so you only have to buy one manual. Learn that manual and those guidelines that we showed at the beginning of this Live with Laureen, and then take that CRC exam.

So, what you need to do is do our full course for ICD-10 plus the CRC course because the one is the coding aspect, the other is all of the theory and the payment methodologies and all the other stuff that you’re going to get tested on. Those two together are going to prepare you for the CRC exam, but it’s one manual. Then, you take that exam and you can get a job with places like Optum, United Healthcare…

Alicia:  United Healthcare is contracted out. Optum is contracted with them. Even BlueCross BlueShield has an MA plan, all the insurances have a major MA plan, and that the MA plans are the ones that hire you but you have to keep in mind that the hospitals are starting their own risk adjustment group and a hospital have four or five coders doing just risk adjustment. That means you’re doing document specialty work and making sure that all of this stuff is accurate before it’s sent off in the trenches risk adjustment coders because it improves their money payback.

Alicia:  Yeah, reimbursement. They’re getting more money out of the insurance companies because they’re documentation and all their ducks are in a row, because risk adjustment does not work like regular billing. They don’t care about that. They don’t even care what’s been coded; they care about what’s in the documentation themselves. They’re looking at it with a fresh set of eyes. I get a little whoa! Because I really enjoy risk adjustment; but you’re right, you can go with that path. I used to balk when Laureen said that and Chandra would say that, “You don’t have to be a CPC to get your risk adjustment.” I’m like, “Yes, you do! You have to.” “But, no. We’ve got students they’re doing it and they’re succeeding with going that route.” I was like, “Wow! OK!”

Laureen:  I thought, really? She’s recommending, they go right for it; and now I realized, why not? Why learn all that CPT and just a little bit of HCPCs but basically CPT.  The CPC exam is predominantly CPT and some ICD, and that’s because it’s a physician-based exam and what drives their reimbursement are the CPT procedure codes. But, if you’re going to go for risk adjustment, you don’t need to know that, so why… But maybe it’s important to know what it is and have a familiarity with it to be a good coder, in my opinion.

Laureen:  But do you need to know it to the end of detail? No. That’s another path and a lot of people are doing that.

I just saw a question: “If we sign up now for the course, we’ll use 2017 books and info?” The way our courses work is they’re always being updated. We don’t have a set timeframe, we kind of analyzed the different modules and say, “Oh, there’s been a lot of changes this year so we’ll be doing an updated lecture recording.” But the textbooks, you control when you order it; you order them on your own, we give you the link. The new textbooks normally aren’t ready until the end of January, but I did get the new AAPC PMCC, that’s for our physician based coding course, our PBC course, those preparing for the CPC, those are already shipping for 2017 because I just got mine.

When you go to the bookstore, you’ll order the most recent ones from there. Now, some people will enroll now and they might wait 3 or 4 months to get started. You have a whole year to do your course with us, and the course normally takes 4 to 6 months. So, all you do is you let us know, say, “I’m going to probably start around February so my coach doesn’t need to start coaching me (i.e. nagging you) until then.” But you can get your books, you can get all ready, and then you have plenty of time to do it.

This segment “Medical Coding vs Medical Billing: Do I Need to Learn Both?” originally aired on Live with Laureen #012.