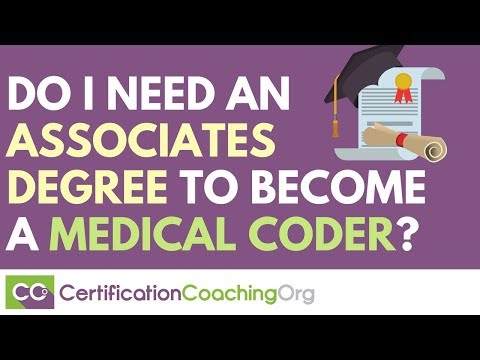 Laureen: Yup. Anything you wanted to add on any of these questions, Lori?

Laureen: No, you don’t. You know, sometimes we have to read it literally. It’s a recommendation. It’s not a requirement. And we’re here to tell you, many of our students, I would probably say 80+ percent don’t have an advanced degree. Now, would it help you? Would it make your resume go to the top of the list compared to other coders if you did? Yeah, of course, but not always. Not always. I mean, look at our Chandra,  she doesn’t and she’s got a gazillion-million credentials. She’s uber smart on all of this stuff. Anybody would be fortunate to hire her. You got to go with what works for you. If that is important to you and that means a lot to you, then go ahead and do that.

I used to teach for Drexel University in Philadelphia, face-to-face class. I worked with the director there and they developed these courses that I put together – the medical terminology, the billing course, the coding course. We had a whole bunch and we made it into an associate’s degree. That was the first associate’s degree that was offered in the country. That was pretty exciting. They’re still doing it and it’s going great. So, there are schools now that are offering degrees with it, but it’s not a requirement for sitting for a certification exam.

Lori: Is it Hawaii?

Laureen: Yeah. So Hawaii is the only state where you have to be certified in order to do coding. The way I understand it is because state licensure has to do with protecting consumers. When I was an occupational therapist, I had to be licensed in New Jersey and if I wanted to work in Pennsylvania, I had to be licensed in Pennsylvania. Because we can do harm to patients. We could break their arm, we could be doing range of motion wrong.

But as coders, can we do harm to the consumer? My opinion is yeah, we can. Because I’ve had it happen to me. I had complicated migraines and the doctor was trying to rule out MS and so he wrote “migraine versus MS.” Well, the coder coded me as having multiple sclerosis, and I didn’t have it. When I tried to get life insurance or whatever, I kept getting denied or whatever. So I’m like, “What is going on?” When I looked at it, I’m like, “I don’t have MS.” So, did that coder harm me? Yeah! But not in breaking my arm but, you know, you can do harm by not coding properly. Picture someone getting a diagnosis of AIDS if they don’t have it.

Lori: Yeah. That’s the one I was thinking of. One you have to be really careful with.

Laureen: So we’ll see if that catches on. I mean, it’s been a long time. I’ve been doing this since 2000 and heard “oh, it’s coming, it’s coming.” I really thought it was going to be like right around the corner. Now I’m kind of realizing with healthcare, yeah, things don’t happen that fast. But ICD-10 did eventually come. It only took 17 years of me hearing that it was coming. But, at any rate.

2 thoughts on “Do I Need an Associate’s Degree to Become a Medical Coder?”