Alicia: Ooh, another exciting one. I just did have another webinar class on PVDs so I learned quite a bit. It was very interesting. PVD and PAD kind of the same thing. When a person has a diagnosis, this means that there’s something going on with the large arteries or the peripheral vascular system. And mind you, this is a very broad system.

Alicia: Okay, 1) There’s 3 things you can have going on. You can have an obstruction, stenosis or narrowing. So obstruction, of course, means there’s something in there clogging up the process. Stenosis is more or less a hardening and a narrowing is just like it sounds, it’s narrowing the veins or the arteries. PVD is not resolved with angioplasty or any other test. You’ll often see that a person went in for an angioplasty. 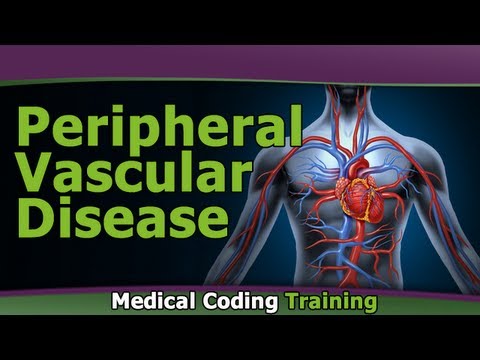 But let’s see… once the person has PVD, that’s it. You’ve got it. It’s chronic. It’s not going away. So what they do is they treat the side effects and that’s what angioplasty does. Common medications that you’re going to see when a person has PVD is like Zocar and Plavix. You’ll see that quite a bit.

These are heads up that the person has PVD. Signs and symptoms of PVD: you need to know these because especially when you’re doing outpatient coding, you want to… you don’t do signs and symptoms. So your person’s going to have pain in the calf. They’re going to have weakness in their extremities. They’ll complain of numbness. They’ll have cramping in their extremities or they complain that their feet and their hands are always cold.

Claudication, I can’t tell you how many charts doing this Medicare Advantage coding that the patient has claudication or it’ll state patient does not complain of claudication. And after a few of those, I had to go look it up to make sure I understood what it was because it didn’t always seem to fit. But I had always thought of claudication as more or less limping. This is the way I had learned it. But it also just having pain, tired or weak feeling that occurs in your legs, usually doing an activity such as walking. So you know, you heard people say, “Oh, they went weak in the knees” or “They were walking but their legs are just so week all of a sudden.’ And that’s claudication. And then also, the limp, a lot of times, with claudication and that’s a sign that the person has PVD. And you will see that in the charts.

Okay, there’s different diagnostic tests that they do for PVD. They’ll do the ankle brachial pressure. So you’ll see, they’ll go down and check… they’re checking the pulses is what they’re doing. Doppler studies are done to make sure there’s good blood flow. Ultrasounds are done to see if they can see the vessels and if they’re working properly. These people are going to get routine labs and they’re going to see them getting lipid panels. They’re checking their cholesterol and triglycerides when they have PVD. They’re going to be doing this on a routine basis. They got to keep that blood thin and not clogged up to make sure they don’t have any suffering anymore.

And I think the next… when you scroll down, it’s going to show up some medication or treatments. Okay, one other thing that makes PVD even worse is if you’re smoking because everybody knows that smoking is like a vasoconstrictor. And so if you’ve already got PVD and then you’re smoking, you’re shrinking those vessels even more. So what the first thing they need to do is stop smoking and you’ll see a lot of counseling to stop smoking on the charts and stuff. Managing the underlying condition – if a person has diabetes or hypertension or hyperlipidemia then they develop the PVD. Well, they probably got it because of these other diagnoses. So you can’t cure PVD but you can treat the diabetes and you can make sure their blood pressure stays low. And then you can give them medications that are going to keep their cholesterol at a manageable level because of the hyperlipidemia, meaning they just have too much fat in their blood and it’s clogging up their arteries.

The angioplasty, this treatment, they’ll do an artherectomy. They’ll do a stenting to keep those vessels open and sometimes, they’ll do bypass grafts if they’re still clogged up. But remember, PVD is peripheral vascular so that’s all those extremities. You know, you can do bypass grafts of the heart and angioplasties and stuff. But you really can’t do much for those extremities because the vessels are just too small. So again, once you have PVD, that’s it. You’ve got it and it’s not a curable condition.

So keep that in mind when you’re doing your charts that if a person has PVD, down the road, they’re probably going to get that diagnosis again and again and again. You’ll be able to code it because it does not go away like diabetes doesn’t go away.

Laureen: Thank you. We had a quick question in the chat I thought you could answer. I think you had mentioned in your previous blip about advanced coding. They want to know what you meant by advanced coding.

Alicia: Oh well, at the college, what they did was they had students that were in different medical fields. And so they took a basic coding ICD9 and CPT and did a little bit in HCPCS. But if they were going to coding as a specialty, they took advanced coding. And then that actually was not just diagnosis coding you know, where they gave you statements where you looked at a chart and said, “Oh, I need a code for hypertension.” You know, if you were working in the medical field and someone said, “I needed a code for hypertension” then they could look it up and say 401.9. But if you’re in advanced coding then you’re actually coding charts and op reports and you really get into the guidelines, things like what goes with Peripheral Vascular Disease… you know, what conditions, how do you code first, like the questions that we just did with cancer coding ad things. You really know the guidelines and you’re usually going to sit for the CPC exam. Basic coders don’t usually get a certification, an advanced certification like a CPC exam or CCS. So it’s more detailed, kind of like… it would be like what we do at CCO. That course is an advanced coding course because it’s instructing you on how to pass the exam and code in the real world.

Laureen: Thank you, ma’am. And Anna says, “Alicia, I love your enthusiasm.”

Alicia: I’m always enthusiastic when it comes to coding. 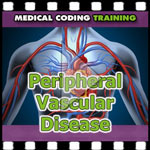