So let’s go to our answer sheet here. This is a scan of my guideline page about administration of contrast. Now if you’ve listened to these before, you know you’ve heard me say I’m a very visual learner. When I see paragraphs like this, I’m like, “Oh dear God, help me make it visual.” So this was the initial attempt where we were underlying… so let’s just kind of read and then I’m going to show you my visual attempt and see what you like better. 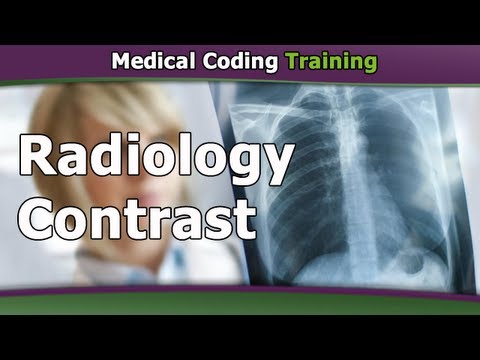 So first thing you have to understand with contrast is oral and rectal. For radiology coding purposes, does that count. You can’t code any of the radiology codes that say with contrast if it was given orally or rectally. Okay so the phrase ‘with contrast’ using the codes for procedures performed using contrast for imaging enhancement represents contrast material administered. And these are the 3 separate ways – intravascularly… so they’re going into a vessel and that means vein or artery. And then intraarticularly. A lot of people mix it up and think that means the artery. It’s articularly which is talking about the joints. And then intrathecally which means into the spine… so a little note there that it means into spine.

So then this first paragraph talks about for intraarticular injection, use the appropriate joint injection code. So the guidelines are letting us know, in addition to the radiology code, we can also code a joint injection code. If radiographic arthrography is performed, also use the arthrography supervision and interpretation code. So in order to get that needle into that joint space, you’re probably going to need some imaging to help you do that which is ironic because you’re doing it in order to do xray or CT scan or whatever. Okay so that’s what this is saying. It’s basically a permission statement letting you know what you can code in addition to the regular radiology code.

So I’m going to go right down to my nice table. Now I feel better. So basically, this is how I broke it down. What’s the contrast type – oral, rectal, intravascular, intraarticular, etc? What’s the study type? Is it with contrast or without contrast which is also called a dry study, by the way, with contrast which is also called a wet study? And then are there additional codes that we can bill? And then is fluoroscopy included? Fluoroscopy is like… the way I always remember it is picture the 3 Stooges where they used to run behind that x-ray machine and you can see their skeleton kind of dancing. It’s like a moving x-ray and it’s used a lot for guiding needles and things like that.

So oral and rectal, as we discussed, you cannot code as a study with contrast. You could only code the one that says without contrast. And it’s very hard for new coders because when they read the scenario, they see the word ‘contrast’ and they want to code the indented code that says with contrast. But coding-wise, you can’t, okay?

If you are injecting… if the documentation is saying there’s dye or contrast material being injected into a vein or artery, you can code that as a study with contrast. But there are no additional codes. You can’t code the injection code for the vein. There are codes in the medicine section for that but you’re not allowed to bill that separately. It’s bundled into the indented with contrast code.

Then if you do it in a joint, intraarticularly, there’s actually two ways to do that. You can do the x-ray method or the CT or MR method. And that’s where that paragraph was getting all confusing and why this questioner was asking this. So if it’s the x-ray intraarticular type, you can code it one of the indented with contrast codes and now, you’re allowed to code a joint injection code.

The difference between the x-ray type and the CT MR type is the fluoroscopy is included in the x-ray type but it’s not in the CT or MR type. That you can code separately if you do it.

And then finally, intrathecally, the spine one, you are allowed to code the indented with contrast codes of course. And in addition, you can code on of these spine injection codes – 61055 is for the very top cervical spine space and then these are for the rest, 66284. And you can code fluoroscopy separately.

So hopefully, this little table will help you. I do have… if you go to the discussion board, I’ve shared this link and I’ve uploaded this as a PDF file on a site called Scribd. So you can actually print this out and have a copy for yourself.