In September I ordered a small packet of the old CMS-APPROVED 1500 (08/05) version claim forms to sustain me until 2014. Instead, the medical supply company sent me 1000 new (NUCC) APPROVED OMB-0938-1197 FORM 1500 (02-12) claim forms. I thought my office would make it until the end of 2013 since we submit 98% of our claims electronically but there are, however, those occasional appeals that you cannot fix online or over the phone and motor vehicle, or workers compensation claims, that might require a paper form.

I estimated I would run out of the old claim forms just in time for Medicare and the other payers’ implementation date of January 6, 2014. Wrong!!!! Two weeks shy of the new implementation date, I run out of the old claims. The payers will not accept the new claims, even though I received 1000 of them in error three months prior. The solution? I ran to our local Staples store and purchased one-hundred CMS-1500 claim forms (08-05) for $18.99 to help us meet the January 6, 2014 deadline, quite a lot of money when you comparative shop. One-hundred claim forms for $18.99 comes to .19 per claim form while a thousand claim forms costs $37.99 out of a medical supply catalog, amounting to .04 per claim. I didn’t like the price difference but it was a much needed temporary fix.

But now there has been a change of plans. I read that the new version of the (02/12) paper 1500 Health Insurance Claim Form, which accommodates ICD-10 reporting needs and aligns with requirements in the Accredited Standards Committee X12 (ASC X12) Health Care Claim: Professional (837P) Version 5010 Technical Report Type 3 has “changed” their implementation timeline to April 1, 2014. Any paper claim received on an old CMS-1500 form “after” April 1, 2014, will be returned by the carrier.

My dilemma? All the catalogues are selling the new version of 1500 so I need to start making some calls to find old versions. And what exactly “are” the changes to the new (02/12) paper claim?

Visit your Medicare website to learn more about the new 1500 (02/12) claim form and follow the news. It is not unusual for Medicare to change implementation dates on providers so you want to be prepared.

Also, examine any paper claims you may have recently ordered and make sure you possess the CMS 1500 (08-05) version. The new forms will not be accepted, nor will a “copy” of an old claim form be accepted by any carrier.
Remember that your medical billing software will not need to be updated yet to accommodate the new 1500 version (many vendors have upgrades ready to send to their providers) and that the above information refers only to “paper” claims; not electronic claims. 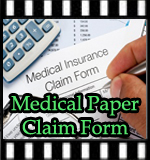