Alicia: Vascular Coding, and the title of this one was Not Cardiovascular Medical Coding. So, we always say “cardiovascular coding,” but Caren was saying, let’s look at the vascular aspect and a lot of people don’t realize there’s really a difference there. And this was an intense overview of many types of vascular fields and, again, it was awesome! I really enjoyed this.

Let’s see… I took one of her, just a little highlight. This stuff, when you go to these conferences its intense and just great information. The objectives that are covered in this session, she went over: Understanding anatomy for vascular coding. Review of the rules for vascular procedures. Review of ICD-10 future coding. And, understanding documentation on vascular notes. Honestly, it felt like she went over a lot more than that.

One example she talked about bypass. Most of us think of cardio bypass around the heart, but there are other places in the body that have bypass procedure stuff. So, as we scroll down, she actually pulled out the coding for renal. So, she said, these are the things you need to do first: Where is the blockage at? So, anatomically, where’s the blockage? Is it a native or in an existing graft? That’s very important. And what vessel are you connecting to? So, those three things you have to be able to express in your coding.

And let me tell you guys, I almost, there were some awesome pictures out there and I almost put up one open and then doing the surgery, and I thought it’s kind of late at night, you guys might have had supper late, tummy’s upset, and I didn’t want you barfing. I would have loved it, but I was being nice to you. 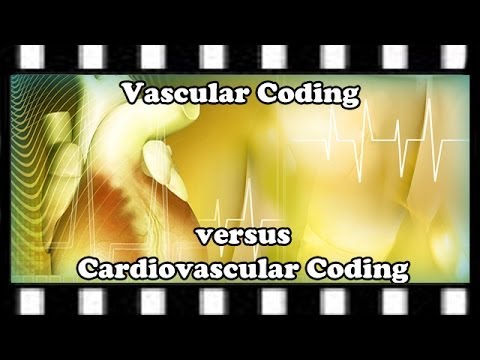 Let’s look here – this is just a little bit of anatomy. Look where you see that major artery going down the abdominal aorta artery, and then see where there as it goes to the kidney, that renal artery, that has started the disease process in that artery. So, they have to go in and do a bypass.

As we scroll down, she has a real good picture. You can’t take the information, they give you all the notes and stuff, but that stuff is they don’t let you grab a copy and paste that. But I found this picture of a grafting, and look it says two different types – end to side and end to end – just to give you an idea that what they’re doing is they’re taking vessels and they’re moving them and stitching them in to another artery so that it feeds the good blood, the oxygenated blood where it needs to go. Go do a Google image search on vascular grafting and you’ll get a good education – maybe you won’t, it’s kind of gory some of it.

What is included? This is what you’re going to have in your coding, you’re going to have the harvesting (the procurement per CPT language). That’s what they call the harvesting – is the procurement of the saphenous vein. The completion of the angiography. The vein valve lysis, physician may describe using a valvulotome – I’m sure there’s a different way to say that. And per the CPT “Primary vascular procedure listing include established both inflow and outflow by whatever process necessary.” So, those are the things that’s included on these procedures.

But what’s not included? This is also very important: Diagnostic arteriogram, if there is not a recent prior clinically adequate study or patient has suffered recent change in vascular status. Harvest of upper extremity vein, which is 35500 and it’s an add-on code. Harvest of popliteal vein, one segment, 35572. Harvest and construction of autogenous composite graft – and autogenous means like autograft, it means it’s coming from your own body, and then those codes. Adju – say that word.

Alicia: Adjuvant – OK, I don’t think I would have said it that way – procedures. Again, I’m not going to be quoting these codes for you. But be careful to read, she said, the parentheticals associated with the codes. These give important information about how to properly use these add-on codes. So, you really got to pay attention to the detail when you’re doing this.

Educate your physician. If you’re in a situation that is an exception to the rules – and I’m sure there are lots of them – be sure that the documentation supports your code and that it is modified correctly! Very important. So, that is just one little segment of the stuff that she went over. It was pretty amazing, real juicy, good information.

Laureen: Hey, Alicia, can you explain native versus graft?
Alicia: OK. So, when they’re saying “native” that means that is the vessel that you have in your body already. It’s your “native,” to you. A graft is something outside that’s being replaced and not natural. It wasn’t made that way, they’re either bringing in a piece of something else or they’re taking an artery or a vein from someplace else and they’re grafting it in. That’s the difference. When you’re doing CAD, you always have to, they do CABGs and stuff, that’s all the grafting process is and you’ll notice that the codes will say “native” or “graft” and it changes the code from 414.01 to 414.00 whether its native or graft. That’s what –

Laureen: Someone is saying they want me to go back up to what’s included – there you go.

Laureen: Valvulotome. A “tome” is a cutting instrument.

Alicia: You know what, there is a website out there. If you don’t like the way Laureen and I say things, there is supposedly this site out there and you can Google it, that gives you the pronunciation and they have a British accent – the person that reads it. So, that sounds kind of funny.

Laureen: Someone is asking, human or non-human? I think they’re taking about the graft material.

Alicia: This one was human. If it says “auto” that’s human, “xeno” is from another species, and let’s see what’s the other one, there’s “auto” –

Alicia: “Allo” which is from the same specie but a different person. So, “auto” is like autograft.

Alicia: Like yours, autograft. The “xeno” is another species, and then – is it allograft? Yeah, auto and allo. Allo is that it would be like taking a kidney from another family relative and putting it into you. Whereas, a pig valve replacement that they do in the heart, that would be a xenograft, because it’s from another species.

Laureen: Xenograft can also be those manmade grafts, too.

Alicia: Yeah, because it’s not from –

Laureen: [laughs] Leslie says Alicia is so funny – yes she is.

Laureen: I got to share this story about trying to find her bright yellow canary Camaro.

Laureen: In the parking lot at the Gaylord Opryland, which is this huge sprawling place and –

Laureen: That was so cold.

Alicia: She had like flip-flops on her because her feet were sore.

Laureen: Oh my goodness, and –

Alicia: I kept saying, “I see something yellow, it looks familiar.”

Laureen: Because she was moving from sharing a room with one lady and then moving in with me so we could prepare this for you guys. And she went to move the car closer. By the time we found the car and we got in it and drove around we literally moved the car probably 20 feet. I could have killed her.

Alicia: That was not even 20 feet [laughs]

Laureen: So, I wasn’t thinking that she was so funny that night but –

Alicia: Yeah, she was really cold and tired.