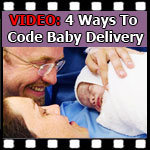 So this is an OB question for the certified coders out there… and when I teach this, I say in class, “How many ways are there to deliver a baby?” and most people will say, “Well, two: vaginally and cesarian.” And coding-wise, there’s actually 4 ways to code delivering a baby: There’s vaginal, cesarean, and there’s VBAC which is Vaginal Birth After Cesarean.

But there’s successful VBAC and failed VBAC. So those are the 4 main groups when you want to think of OB delivery time. How is the baby delivered? Those are the 4 different ways. 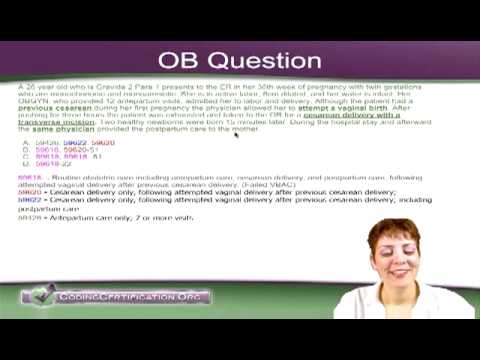 So in this question, it says that even though… or although the patient had a previous cesarean, the physician allowed her to attempt a vaginal birth – that’s a VBAC – and after trying, it didn’t work. Okay so they ended up doing a cesarean anyways. That’s a failed VBAC. So if you look in your coding manuals, you’ll see those 4 groupings.

So what I did on the next slide is I took this question and I wanted to show her how to break it down. Hopefully you’re on duty. And I did my little color coding like I was explaining before, try and find the patterns. So right away, hopefully you’ll learn from the previous slide, my mind’s thinking A is going to be wrong even if I didn’t read it because I’ve got 3 instances of the 618 code, the 59618. So to me, that’s got to be a correct code and that’s an answer B, C, and D. So I’ve already thrown out A with hardly even looking.

And because… let’s see here. Alright so I did look it up and that’s routine obstetric care including antepartum, the cesarean delivery, and post partum care. So it talked about the physician seeing the patient, right? It’s the same physician throughout, during the hospital stay and after, the same physician provided the post partum care. So they did the pre-op… not pre-op and prenatal, the delivery, and the post op. That’s called the OB package. And the 4 packages are vaginal, cesarean, successful VBAC and unsuccessful. So the 59618 is the unsuccessful, okay? Because here, it ended up being a cesarean delivery following attempted vaginal delivery. Okay, that’s your failed VBAC.

So we wouldn’t code 59620 – cesarean delivery only – because it’s bundled in to 618. So answer B is wrong. I know she was saying that that was what the answer key said but I don’t agree with it. So it could be a typo you know, things like that happen. So that leaves it C or D.

Now the other… this was twins, right? Yes, with twin gestations. Okay so… and it said, “2 healthy newborns were born.” So if there was only one baby, it would be 59618, done. But because there’s two, the question is, “Hmm, do I report another unit of 618 with a 51 or do I do modifier 22?” I did some research on it and I’d say 80% of the answers were modifier 22. But some payers actually want you to list it twice with a 51. So I don’t think this is actually a good practice exam question because it’s really pulling in reimbursement stuff like payer preference stuff. But if it were me, I would go with D unless I got information from the payer to do it differently, okay?

Okay… oh, and I have one little extra thing because it used to always confuse me. Gravida 2 Para 1 unless you’re you know, an OB person where you’re familiar with this. I think I have the next slide for that.

Again, I got this from Find The Code. They have the Dorlands Medical Dictionary built in there. You could also you know, Google these. But Gravida is a pregnant woman so Gravida 1 means during the first pregnancy. So in our situation, she was… Gravida 2 Para 1 because this is her second pregnancy. And the Para 1 means she had… has a previous child that… so a woman who has produced viable young regardless of whether the child was living at birth. So Gravida 2 Para 1, it’s her second pregnancy and she delivered once before.