Q: I will be working with PQRS soon and I am not sure I understand what it is. Can you give me some insight?

A: You bet I can. Again, this is really actually very fascinating, and if you deal with Medicare patients very pertinent to what you’re doing, because like HCC, what you code now affects your reimbursement next year.

So what is PQRS? It stands for Physician Quality Reporting System. It is a CMS program. It affects the money you get paid, not only does it affect the money you get paid but it also affects the care of the patient. Really that’s why it was set up is to make sure the measures are being met for the treatment of the patient for a specific diagnosis. The initiative started in 2007, but it became a system in 2011.

So, initiative started in 2007, it was kind of a pilot program – you know, we’re just starting it, we’re getting everybody on board, it’s all a positive reimbursement thing. You did have a choice in participating, but when you participate you’re going to get more money. Then, in 2011 it became a system, so now there’s still easing into it, but as of 2013, now, you’re going to be penalized if you’re not reporting the PQRSs. So, again, the purpose is to streamline federally funded systems, but it also enhances patient care and makes sure that what you’re doing for the patient meets the measure. So, if a patient has diabetes, then you’re meeting the measures by doing these things. These are, think of the common things that would be done for a patient with diabetes.

Even though it was prior to the Affordable Care Act, the Affordable Care Act expanded the program – you know, expand government programs. So, what it does is it tracks measures. It’s all about statistics just like coding. I’m always saying that don’t forget you’re not only coding to get reimbursed, but you’re also coding for statistical purposes. 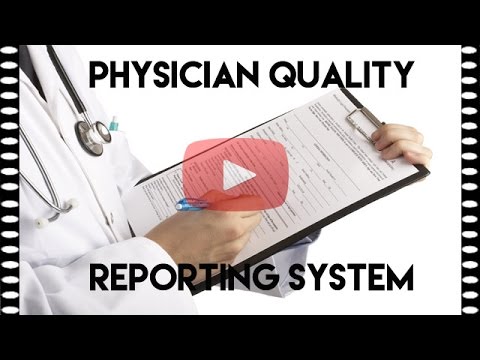 What you code today affects what happens in the medical world in the future, because as they see a specific diagnosis in the treatment that does or does not work whether a person gets better or worse, using cancer as an example, then they know, that’s why they know that that particular medication, if a woman who has breast cancer, takes it for five years, they are less likely to have a recurrence of the breast cancer. They know that because of us coders tracking that and giving them the statistics; so it’s pretty fascinating. So, what was tracked in 2014 will affect reimbursement for ’15, ’16 and ’17. And they are now in the penalty phase, so you have to capture this stuff, and if you don’t, you’ll lose a percentage. There’s much more information about PQRS, we’re going to have a CEU on it here pretty soon; so you can look for that if you want more information. If you need help with PQRS, here is the number to get a hold of them, it’s the Quality Net Help Desk, and they’re available Monday – Friday; 7:00 AM-7:00 PM CST.

Their phone number is 1-866-288-8912 and they have an email address, which is Qnetsupport@hcqis.org. They’re the go-to people to answer your questions. So, if you don’t know about PQRS and you plan to work with Medicare patients then you need to pick up that knowledge and get real savvy about it. It will help you get a job if you can tell them you’re familiar with it.

Medical Billing and Coding Course Online – The Challenge of PQRS