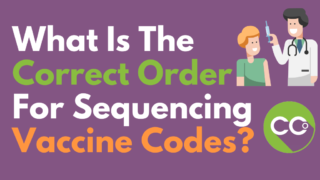 Q: “What is the correct order for sequencing vaccine codes? Do you sequence the vaccine first and then the route of administration? What order should be followed?

A: ​Regrettably, there isn’t a specific guideline that answers this question and there isn’t anything in the CPT Manual that tells you how to list them in a particular order. Usually, you’ll discover answers when you start asking insurance carriers for their guidelines. For example, Medicare will state to “list them in RVU order.” RVU usually corresponds to dollar value. So, you list your most expensive one first and you work your way down price-wise.

Even if several vaccines are administered using different routes, you only have one initial. You can only do one thing first, so make sure you’re only reporting one initial code. Most of the time, what coders do is list the toxoids first and then the administration codes. But, there isn’t any specific guideline saying that one code goes first before the other code.