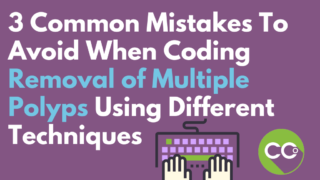 Do you find colonoscopy coding tricky? For most beginners, it can be, particularly when coding removal of multiple polyps using different techniques. You can check out below the three common mistakes coders should avoid to make colonoscopy coding easier.

First, let’s use this specific scenario as a reference for this topic.

The first mistake newbie coders often commit is the use of XS code.

Yes, you can code for each technique used but you do have to use a modifier for each additional code. I personally use the XU, and the reason I put that on there because someone told me they used the XS. I don’t think you’re supposed to, I think XU would be appropriate. For those of you that aren’t using XU, it’s the old -59.

If this is a Medicare patient being seen for the screening colonoscopy then you still have to use that PT modifier on each one of those codes, say that’s just an added thing.

One thing to watch for is that the physician is performing two different techniques on the same polyp such as using the snare and then finishing off with cold forceps. All he’s doing at that point is he didn’t get it all, so he’s going back in there with a different tool.

If he’s only trying to remove one polyp and he’s using two different techniques then we’re just going to bill for one technique because the other one was just there to help finish it off; but if he’s taking and removing polyps using different techniques anywhere up and down the colon, then, yes, you should not have any problem getting those paid as long as you’re using the appropriate modifiers.

In a nutshell, colonoscopies you can bill for any polyp removal technique as long as you have the appropriate modifiers listed.