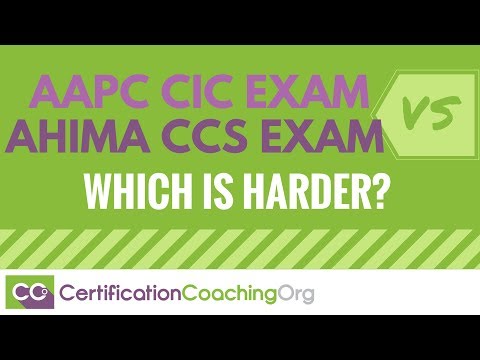 Let’s see, the next one, and this is a comment, but I want to discuss it because this was actually my opinion. Gerald made the comment, “The CIC exam is really harder than the CCS exam.” I actually agree with Gerald. Granted, I took the CCS exam in March…?

Laureen:  Did you do it as a beta?

Chandra:  No. I took the CCS exam, right before they cut off the testing before the ICD-10 implementation. They cut it off in April and I took it in March right before then. I did not, which I had 12 years experience at that point in time and I had done a little bit of everything, I did not have difficulties with the CCS exam. However, when they beta tested the CIC exam, I was a beta tester for it. When they beta tested that exam, we only got four hours to do all of the same things that’s on there now. So instead of 5 hours and 40 minutes, it was 4 hours, it was same time limit as AHIMA’s. And when I was asked by the representatives of AAPC what my thoughts were, I quite frankly thought it blew the CCS exam out of the water from an inpatient perspective, because instead of having to code five inpatient cases, I now have to code ten. You average 9 to 11 codes per case. That’s a lot when you’re talking both procedure and diagnosis. We’re not talking CPT procedure. We’re talking, it used to be ICD-9 Volume III, now we’re talking PCS. That’s a lot to get through, a lot of information to cover, and I just thought it was more difficult.

Laureen:  That’s why it’s the only one that hand score because of the cases, right?

Chandra:  Right. And it takes over a week longer usually to get your results. I know with all the other exams, the CPC exam, all of that, they tell you 8 to 10 business days, and they usually get it up in like four. But the CIC exam says a minimum of 10 to 15 business days, and it’s usually in that because it actually gets hand scored by three different individuals. It goes to one individual … because when you take that exam, you handwrite in all of your codes, well first of all then you got a legibility issue and there’s not really software sophisticated enough to read everybody’s handwriting. So, they have one person.

I know they’re working on using a software, they were last I asked, but when the process was explained to me last year, it went to one person to key in all of the answers that somebody had written. It went to another person in a different department that didn’t have any contact with that first person, to do it all over again. Then, the two were butted up against each other and anything that didn’t match got kicked out for a third person to review before it was ever scored, so to speak, just to make sure that they had the right consensus on the codes that were included there.

Laureen:  As far as scoring goes, I saw a little discussion…

Chandra:  Yeah, I think Gerald asked the same question, if I understood how the point system works for scoring. My understanding is that the 60 multiple choice questions are each worth one point apiece. That’s pretty easy. When it comes to the cases, there are 10 cases and they range from 9 to 11 answers, and actually it could be less than that, it could be 7 on one and 14 on another. They average out to 90 points total across those 10 cases because that makes up the difference to 150 with the other. As far as the exact scoring, I don’t know. I do know that if you say you get the diagnoses right but you get them in the wrong order, you’re not going to be as penalized as severely as if you completely got a wrong code. At least that’s the way they explained it to me.

This segment “Is the AAPC CIC Exam Harder Than AHIMA CCS Exam?” originally aired on Live with Laureen #013 on January 5th, 2017.

1 thought on “Is the AAPC CIC Exam Harder Than AHIMA CCS Exam?”