A: Now, the next slide after this one, Tammy is going to do, which also talks a little bit about what is considered a core credential.

Alicia: Core credentials – this actually came from the AAPC. You can go to the AAPC website and find this graph that they got here. The 3 core credentials are the CPC, the CPC-H and the CIC. Mind you, they have informed everybody that they are going to change the name of the CPC-H to COC and that is because it’s Certified Outpatient Coder and so it’s just as easier to understand. The CPC-H always kind of threw everybody because they thought it might be inpatient coding and it’s not. But, what they have done is they have created the CIC, which is the Certified Inpatient Coder, and let me tell you some really cool news is that two CCO members have gone this week and beta tested the CIC and that would be Laureen and Tammy, who you’re going to hear from next, and they had to fly out to Anaheim, take the test and turn around and fly back. So, that was pretty exciting. We have that in now, they know what the test is going to be like, the format, and I’m sure they’re going to tell us more about it in the real near future, and you can be sure that we will be offering these credentials.

AAPC Core Credentials What are They? – Video 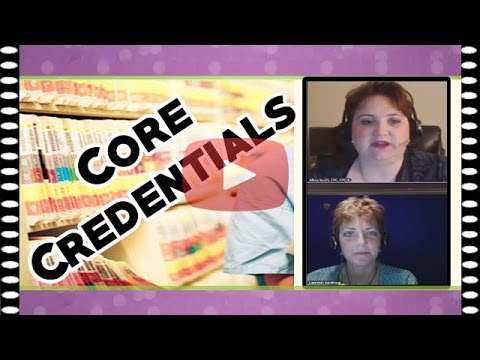 Core credentials – the CPC (Certified Professional Coder) it’s services performed by physicians and non-physician practitioners. Let me tell you though, that the CPC is a standard in the industry and because it’s so diverse, I think in my opinion, coding credential, you will see a lot of CPCs that do inpatient coding. You are a Certified Professional Coder. But if you’re going to specialize in inpatient coding, then that would be the CIC. If you’re going to specialize in outpatient – would be like surgical centers and stuff like that – the ones that actually have the money because you don’t have to necessarily have, insurance doesn’t pay for face lifts and things like. That’s a great credential to have. These are the code sets that you’ll be using with those and unlike the CPC, the CIC you’ll have Volume 3 in your ICD manual and the three is for PCS codes, that’s when we switch over to the ICD and PCS and that’s the one we’re going to do in January. So, if you’re interested in inpatient coding, you’re going to want to pick up a manual that has Volume 3 and understand PCS.

Laureen: Just to give a little history, CPC used to stand for Certified Procedural Coder, because back in the day, AHIMA was in existence first, so the AAPC wanted to service physician coders, so that’s really how they got their start. So they really back then just focused on procedures and that was the CPT manual, and then as time went on, diagnostic coding became more important to support why procedures were done so they renamed it to Certified Professional Coder. That’s how that came about. Then they added the “H” again, not really wanting to get into AHIMA territory and just wanted to focus on outpatient. I remember back when I was on the board I was telling that it was very confusing because I thought it was inpatient. I studied for months Volume 3, and I went to take the exam. I was like, “What?!”

Laureen: I’m like, “I would have taken it long ago.” Now it does have a lot of outpatient reimbursement that you need to know. Now, with the CIC, which I’ll share a little bit, is a very, very fair exam; very challenging, you definitely need to have experience with coding cases that you can be speedy, which I was not. But the 60 multiple-choice questions are all laid out for you on the AAPC site exactly what’s covered and if you go through them, step-by-step, I believe they’re opening it up for the public in October to start taking it, but we are going to create a course around it. Now, those three pieces together would basically say that you are generalist coder and you can code in any setting. You might not have a specialty like cardiology or ortho or something like that, but these are core credentials that are very solid.

I will share, I’ve talked to a couple of friends who were between jobs and recruiters contacting all the time and they’re wanting coders that can do both sides, physician and inpatient, which you know seems unfair because they’re not paying them anymore. But just to let you know that lots of people are getting multiple certifications.

Alicia: Yeah. Because we’re coding it. We want to learn it all.

The AHIMA, which Laureen gave you some background on that, AHIMA came out like in the 1920s, so they’re like the grandfather of getting a type of coding credentials. The AAPC came around in the 1980s, so I always like to think of them as young and hip and stuff in my mind, AHIMA is that steady…Again, both excellent organizations, finding the one that’s going to meet your needs. AHIMA really doesn’t have core credentials. Tammy has given me some more information about that today when we were talking. It’s like, “Yeah, they have credentials but they aren’t set up with the specialties like the AAPC so they don’t really have a core.” But just to throw it in, they have HIM certifications, the RHIA and RHIT, which are HIM and these are degrees.

Alicia: Yeah. You do get degrees to be able to sit for this; however, they have the coding certification, the CCA, the CCS and the CCS-P, which would be like our CPC-H. The CCS focuses more on inpatient coding. So, that’s the basics for them.

Laureen: The CCS is basically inpatient and outpatient, so it would the COC or the CPC-H plus the new CIC. That is what the CCS covers. There’s a lot of CPT on the CCS and there was none on the CIC. It was all focused on inpatient volume III and understanding a lot of the background, the reimbursement, the inpatient perspective payment system and all that good stuff.

Alicia: Laureen did have the CCS at one time and then when her boss quit paying for it, she let it go. She was always tells everybody. But she has tested for it, so she can give you the experience of what that entails.

Biller and Coder  – Scoping out to your Next Credentials: CCS-P vs. CPC