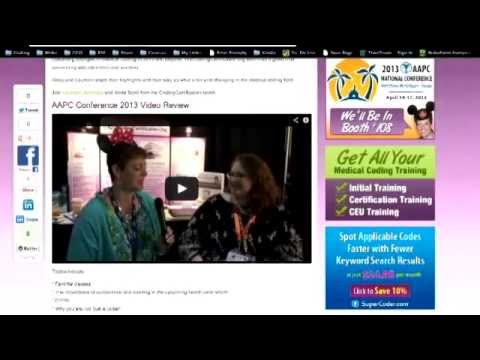 That was as far as the main content. For anyone that wants to stay on, Alicia is going to regale us with some of the wonderful things she learned in the AAPC 2013 Conference sessions. Let me tell you, she found some really good tips with networking from people so it’s definitely worth hanging on if you guys have the energy. Alicia, take it away.

What I learned from talking with Alicia and it was about some of the coding areas, or I should say, elective surgery, was some of the things that you were talking about in some of our videos. You can check our YouTube video on that one. So that’s a good one for me who’s involved always with lead generation for companies and such.

Right. The one thing that they talked about that… there’s a couple of things that really stuck out in my mind, but one of the things was for the future with all the healthcare changes, the companies that are making money are surgery centers. Things like, procedures that insurance doesn’t pay for, let’s say that for example. Because when insurance is paying, they’re ultimately dictating how much money they will pay ultimately ,especially government plans, okay? But the ones that don’t get dictated to, LASIK surgery for your eyes, like gastric bypass surgery and stuff. That only got an ICD-9 code or a CPT codes like in 2010, and they’re just barely starting to pay, they’re really not. Like sleep procedures; they had to pay for that, out of pocket. Other procedures that they have to pay for out of pocket, plastic surgeries and stuff.

So, if you want to work for somebody that you know is going to have money, go to surgery centers, go to the specialty doctors. They usually have fantastic waiting rooms because there’s competition there, and their employees get paid well, they get bonuses. Starting with that CPC-H that’s geared just for that type of coding. That is going to be really interesting to see what happens in the future with that. Another thing that really stood out in my mind is a lot that was done on risk adjustment, and it falls into the HCC coding that I’m doing.

The tide is going to turn in the next few years that we’re not going to… the doctor’s aren’t going to be paid via what they do to the patient like CPT codes, they’re actually going to get paid by how sick the patient is, and that’s what HCC coding is all about. It’s Medicare advantage, and they give the doctor an X amount of money by… if the person has diabetes, they get this much. If they have diabetes and kidney disease they get X and Y, and if the person has neuropathy and on top of that, they get even more money. So you’re going to see some changes with ICD-10 and that’s real interesting, so I’m excited about that because I’m an ICD-9 junkie.

Now, the heads up about ICD-10, again, like everybody has been saying, know your anatomy and physiology. I did a couple of classes with that and they gave some examples of how specific it is, and you’re going to need to know some things that you might not have known before. Now, can you learn this on your own? Yes you can. Is it going to be easier to take a quick course and beef up your skills? Yes it is. So, you might want to consider that before ICD-10 comes around.

There were a lot of fears still about ICD-10 and doing that certification, they’re telling, they’re stressing it, you need to do ICD-9. Get certified in ICD-9 first because ICD-9 is not going away. If you have Workman’s Comp. and they give a list of three or four other things, they’re not using ICD-10; they’re going to stay in ICD-9.

Now, let’s say a person goes in to the hospital and they have a heart transplant and it said… and we’re in full mode of ICD-9; but the date goes by, there’s no leeway, you switch to ICD-10. So, you have to able to code an ICD-9 and ICD-10. Did they really push that? No. ICD-9 is going to help you with ICD-10 because you look up everything the same. Everything ultimately is the same.

A great example that was given by one of the doctors, he said, “Let’s say you open up a catalogue and you’re going to order a shirt from Sears. So, you pick out what kind of shirt you want. If it’s got a collar, it’s a button-down shirt, and you want it in blue. So you take that little code they gave you. You call up the operator and you order that shirt. Now, let’s say you want to order that same shirt with JC Penny, guess what? You take their catalogue, different code, same thing. ‘I want a collar, I want buttons, I want it them blue.’ You did everything the same; it’s just a different code. That’s what ICD-10 is. It is the same except they can even tell you that they’re going to give it to you in cotton, in linen, in polycotton, and polyester. So that’s the difference. It’s really exciting.

That’s good.  I have up on the screen; this is the video that Boyd took of Alicia and me last week. You’re so good Boyd, you got that all the way up and you’re travelling to Israel, you’re amazing. And that’s our little booth in the background and I was interviewing Alicia. This is how Boyd works. “Here’s the microphone, talk to Alicia about the sashes… quick.” And so, I had my Minnie Mouse ears on, but it turned up pretty good. That’s on the blog if you guys want to see it. Just go to CodingCertification.Org/blog and scroll down and you’ll see it.

You guys are very coachable, thank you for being coachable.

It was fun. Just do it! So, very good. Anything else that you wanted to share?

Yeah I could talk forever, but I won’t. Let’s see, a couple of other things that were very exciting about the conference are the local chapters. If you’re not familiar with how AAPC is set up, AAPC is national and worldwide actually; but they divided everybody up in regions, they give them a color. Like I’m in Region 5, so that was orange and everybody gets crazy about colors; and Texas and even Missouri, my hometown, same one.

So, if you’re wanting – and we had a question come through, someone who wants to know about starting a local chapter. Call the AAPC; they will get you on contact with your region. They will get you a mentor if you want to start a local chapter and give you the information on how to get that started. They have a fantastic support network. They’ve got a new group; I think it’s only a couple years old. Laureen, you might have to correct me on that. That they have a board that supports the local chapters. And there was a lot of information and a lot of support at the conference about local chapters and how they are working to make life easier for coders. There’s a really big support networking. I always tell everybody, go to your local chapter meetings, get to know your people. They’re going to get you a job, these are your peers. I can’t tell you enough about that, they drove that home as well there.

If you can go to the next conference which is going to be in Tennessee at – where that’s going to be? Nashville. You’re just so pumped. The amount of information that you get is unbelievable, and I’ll have you know, I didn’t know it was recorded, but I have access to all the slides for thirty days, so I’ve been downloading slides like crazy. And we have permission to use those, I think, as teaching tools. And so, one of the best ones I had was cardiothoracic surgery. I know you guys know, my students and staff,  that I ate that up. I mean, wow! That was really awesome! Yeah 3D slides, that was just so cool.

In fact, right before that interview, I was telling Boyd about all these slides and how they could do this and that. It was really, really awesome! They went into the heart, and it was great. So, it is a real high. And if you can go, save your pennies; put money in the cookie jar. Even if you think, there were people there that weren’t certified yet, they offer exams when you’re there. So that’s great.

Oh, reminds me, I want to give that shout out for my roommate and my fellow local chapter member, Diana Sawyer,  who also helped me with one of the slides before this webinar, like ten minutes before the webinar, so she’s amazing. And she took the new billing, beta tested the new billing exam. 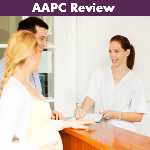