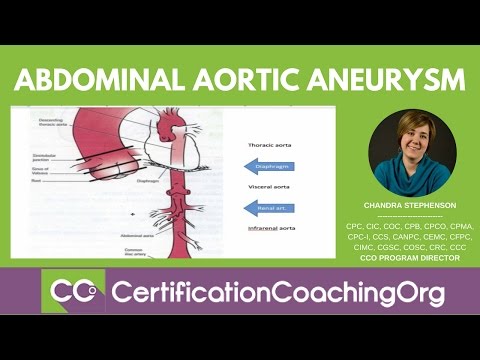 When we talk about an abdominal aortic aneurysm, we’re talking about that part of the aorta that is below the diaphragm and in the abdominal cavity. What happens with an abdominal aortic aneurysm, the patient basically develops a bulge. I tried to give you a picture of that over on the side, it balloons out. What’s the risk here? Well, think about tissue and think about any time that you stretch something.

The example that I like to give is, if you’ve ever chewed a piece of bubblegum when you were a kid – and I know this is going to sound gross – I think everybody did this, either you played with your gum or you blew bubbles in your gum, stretched it out. What happened when you stretched it, it got thinner, thinner and thinner to the point that eventually the bubble burst if you were blowing the bubble. It works the same way with these aneurysms. It gets bigger and bigger and bigger, and that tissue gets thinner and thinner and thinner, and the patient risks that rupturing.

If your abdominal aorta ruptures, you can bleed out very, very quickly because think about the amount of blood that’s flowing through the aorta at any given moment. Typically, these are not repaired until they are larger than 5 cm in diameter. Think about that for just a minute. Five centimeters, that’s a pretty good size, being your aorta is not that big typically. If the aneurysm is growing – first of all, it’s determined that the patient has an aneurysm in the aorta, it’s going to be monitored pretty closely to make sure that it’s not growing at that rate; I have listed here of more than half a centimeter a year, because if it is, we could have a problem. We could need to go and repair that sooner rather than later.

Once they decide to repair it, there are a couple of different ways they could do this, there are two main options. The first one is open, we make a cut into the abdomen and we go in and basically dig down until we find the aorta, we deal with it there. The other option is what we call an EVAR (Endovascular Aneurysm Repair) and this is done endoscopically, much like we do a cardiac cath. We send in a catheter and we go in through the aorta and we place, we deploy a stent. They deploy this mesh stent that are larger than the area of aneurysm because if we’ve got this bulge, the goal of the stent is to replace what’s bulged out, so it will actually be larger than the area.

Let’s say the aneurysm is this long maybe 2 inches there. The stent that they’re going to place is probably going to be like 3 inches, so it goes beyond that end of the part of the aorta that is still normal size. These stents, I don’t know if anybody has ever seen them. They’re mesh but there’s another material in there. It looks almost like cloth to me, but it’s there to basically be a sample of that, or replacement for that aorta. Will it let you open that repair, Laureen?

Laureen: I was talking but I forgot I was muted.

Chandra: It’s OK. Basically, the link that I gave you is to the Johns Hopkins medical site and they talked through how an EVAR is actually done. Let’s go ahead and scroll a little bit farther down, if I get it to pop up here in a minute, we’ll flip back over and show that.

Basically when they’re doing these repairs, it depends on what part of the aorta is affected because the abdominal aorta actually further divides down into different pieces, and I have that right down here. CPT divides the abdominal aorta into the visceral aorta (the part between the diaphragm and the renal arteries) and the infrarenal aorta (that portion below the renal arteries). It depends on where we are as to which code we’re going to use. What I would suggest is in your CPT manual, make a note and I believe if you scroll down, I actually put a picture as to what I would do. I made my little allow showing it.

The little thin piece they have labeled is the diaphragm, so the bottom part is the aorta and between the diaphragm and the renal arteries, which is that top little triangle things sticking out there, is what they call the visceral aorta. The part below the renal arteries, which I have labeled for you, is the infrarenal aorta. So, it’s important to know the difference between those two. I would just write it in, make a little note in my CPT book so that you have that if you’re trying to code for one of these EVARs or the Endovascular Aneurysm Repair because it does make a difference. You have to know where they’re at in the aorta in order to pick the correct code.

The Johns Hopkins website is where I went to get most of the information on the actual repair, how it’s done. It doesn’t include any coding information but you can correlate that information back to how the CPT book breaks down. This gives you a lot of information on timelines, how quickly after they have to do, how long is the patient going to be in the hospital; those sorts of things. Their website is very much written from a patient perspective. But it gives you some great information as you’re trying to figure out how to code for these different scenarios.

I did put a table down here because you have an option for open and again it depends on whether it is an infrarenal or if it is a direct repair with or without graph, or if it’s the EVAR (the endovascular). If it’s an endovascular it divides into either the infrarenal or the visceral and infrarenal, so it really depends on what part of the aorta is affected and how they did it, whether they went into an open approach or an endovascular approach. Once you get beyond that piece, once you divide it into it’s either open or it’s closed endovascular, then it’s how did they do this? Where was it, was it just infrarenal or was it visceral? Then, what did they use, how many prostheses were used? That’s what they call that stent.

So, when we’re coding for the abdominal aortic aneurysm repairs, there’s a couple of questions you need to ask yourself. When you’re looking at the documentation, you need to know three things:

1) What was their approach (open or endovascular)?

2) Where in the aorta are we dealing with (infrarenal or visceral)?

3) How many and what type of prostheses they did use to do the repair?

That’s a wrap on that one.

Laureen: Very good, I love the visuals. I bet you have this written in your manual, don’t you?

Chandra: I do. I’m very visual. 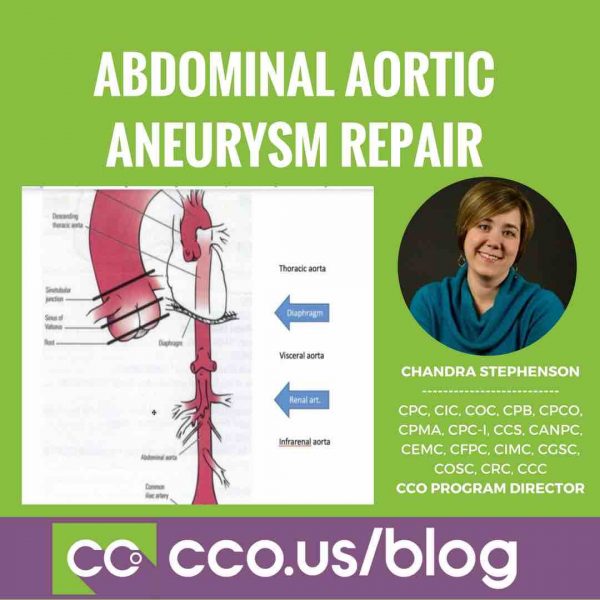