Laureen: Immunotherapy Coding Overview. I decided to stick with the immunotherapy theme and answer another question related to it.

Q: Can you provide an overview of how to code allergy shots – I get confused on these.

A: For those that are new to CCO and just checking us out, a big technique that I teach is called “Bubbling and Highlighting™” and it’s a unique way of marking up your manuals. You’re going to get to see a little taste of that as I teach this Allergen Immunotherapy Coding .

I did a little screenshot here or scanned image. This is what it looks like… Fortunately, all the codes are on one page of CPT. This made it really nice.

Allergen Immunotherapy is the treatment. Everything in Medicine you normally have an evaluation piece and a treatment piece, once they figure out what’s wrong with you. We’re going to jump into this picture now where the patient has been diagnosed – they know what they’re allergic to and part of treating allergies is giving a little bit of what bothers you to help you build up immunity to it.

These are different codes on delivering that service. There’re three pieces to immunotherapy in my mind, and when you start doing this Bubbling and Highlighting™ it makes them really stand out. One is when you go the allergist’s office – they’re the specialist – they’re going to come up with the formula and mix it up and provide you with it in vials. So, I call that “mixing and stuff.”

Then, when it’s administered to you or it’s put into your body, that’s what I call the “stick.” So, you’ve got the mixing, the stuff, and the stick. There’re three pieces and if you keep that in mind that will really help you make coding of this super easy.

Let’s look at our first bubble here – 95115 and 117 are bubbled together. Now, Bubbling and Highlighting™ uses the technique of the parent code being bubbled with the indented codes that go with it and any parenthetical notes. This is a bubble, because it’s – “Professional services for allergen immunotherapy not including provision.” That’s the stuff of allergenic extracts. Then, you’ll see the semicolon – “single injection” – and the indented code says – “2 or more.” Remember that question from earlier, 95117, I said it was for two or more that’s why we would never have multiple units of that code. This is a stick only.

The next bubble – 95120 goes all the way down to 95134. The parent code says, “Professional services for allergen immunotherapy in the office or institution of the prescribing physician or other qualified health care professional, including provision…” We’ve got the stick and the stuff. You’ll hear me if you followed me for any time, I don’t like a lot of words. I need to make things visual. So, when I see all that texts, it goes “wa-wa-wa”; so I have to slowly go through it and go, “Oh, OK. This is the stick, the needle work, and this is the stuff” and I write it in the margin. It makes it real clear if I’m taking a board exam question or if I’m doing real-world coding for this. 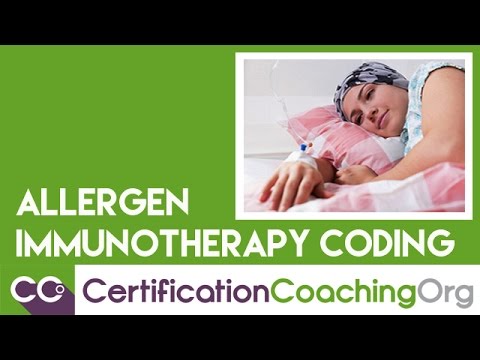 The highlighting part of Bubbling and Highlighting™ is highlighting everything after the semicolon. So, in the parent code there’s a semicolon, you have to really hunt for it and that’s why we highlight it so it really jumps out. Then, everything that’s indented is technically after the semicolon, so we highlight it. It’s just a visual cue that 95125 – we’re just taking this phrase “2 or more injections” and replacing it over “single injection.” The full code starts from professional services and goes all the way down to allergenic extract and then it goes to two or more injections. It’s just a space saving convention for CPT.

Hopefully, that will make that easier for you to figure out. I did put that for the replay clubbers – “don’t double dip” reminders. If you’re reporting a code from stick and stuff like the 95120, don’t code a stick only. You got two stick words there. That’s double dipping. If you’re reporting a code from stick and stuff, then you don’t want to code from the mixing and stuff, otherwise you’re double dipping on the stuff. A stick only CAN go with the mixing and stuff, because there’re no double words there. I think I was in a silly mood – Get it? Got it? Good! There you go; that’s it for your allergen immunotherapy overview.