Alicia: Oh, chemotherapy coding. How exciting. They actually had a question, I think, if you click on that first, I think there was… I’m having trouble with the sample test question. Okay, it says, “Dr. Aaron, an oncologist completed a consult for Sarah who has metastatic malignant melanoma in the anterior stomach wall. At this time, the primary site is unknown and the testing will continue during treatment. Today, Sarah started chemotherapy. Treatments with what diagnosis code would Dr. Aaron report for today’s treatment?” 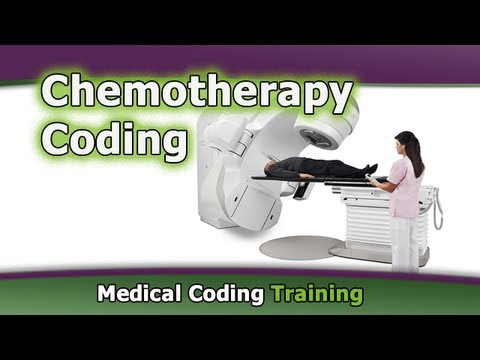 Okay, scroll down. The answer key is stating the correct answer is D. My questioner… “Confusing is when I see the coding guideline note under V58.11 where it states ‘patient’s admission is solely for the administration of chemotherapy, assign V58.00’ which, by the way, that’s not correct. ‘Encounter for radiation therapy or V58.11, etc.’ Therefore, I would not have chosen D because Sarah is starting chemotherapy treatments on this visit. There was no mention of radiation. I chose A because the coding guideline note. How do I see this clear.

I’ll have to scroll down. Even if the patient has a complication from the chemo in the guidelines state that the V codes go first. So when you read the guidelines that are around these codes, it tells you that the V code goes first followed by cancer diagnosis then what the patient is suffering from. It’s common for when the person has chemotherapy for them to get nausea and vomiting and dehydrated after their chemotherapy. So when a patient is admitted for chemotherapy and then develops one of these complications, you still code the therapy first. So keep that in mind. Your V codes are always going to go first.

So we have an example where a patient who’s admitted for chemotherapy, for plasma cell leukemia. It’s going to be V58.11 because they’re getting chemotherapy, not radiation or that immunotherapy and their cancer’s coded 203.10.

Now some people don’t know what these terms were so I pulled these off from Find the Code that has the definitions of them. Antineoplastic… what that just means is that they’re giving you… that’s a medication that’s used to take care of the malignant cells. And then the chemotherapy, the definition for that is… oh, it’s on the next page of it because it was so big. The treatment of disease by chemical agents originally applied to use of chemicals that affected the caustic organism unfavorably but do not harm the patient. And of course, they usually just say chemo. You won’t see chemotherapy but it is a therapy that they’re doing.

So if you go back to his question… oh no, are we able to go back? He’s… if you just eyeball that real quick, she got chemotherapy. So it would be V58.11 because we know that chemotherapy is what they got and that’s the code, V58.11 and it goes first. 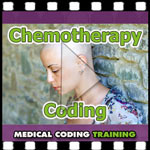