A:  You bet I can. And it is confusing because the terms are interchangeable, both of them use them and yet they do them for different reasons, and so it does. It gets a little confusing. This is actually a lot of slides but several of them are full page pictures.

For CPT, you need to know the treatment status. In other words, “is this the first time they’re being seen” type thing, the degree of the burn and the type of treatment that’s being given.

Now, burns, for how severe they are, are going to be coded from 941-946, so you don’t have very many codes to choose from. This is going to be 1st, 2nd, 3rd degree. If you don’t know the difference, it’s real simple. First degree, it’s just red and painful. It’s like drinking a really hot cup of cocoa and you burn your tongue or scalding yourself in hot water.

Burn Medical Coding and the Rule of Nines – Video 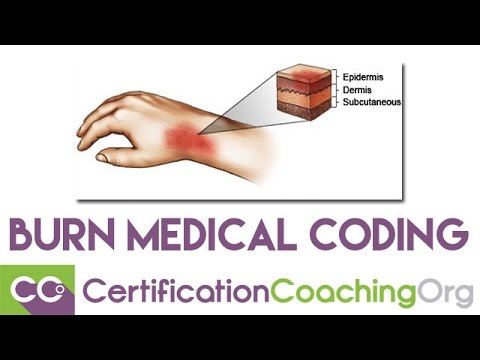 Whereas, a 2nd degree burn is different, it’s quite painful and it’s red also but there are blisters involved. It actually went down into a lower level of the skin, which is another whole area that I chose not to talk about because there are lots of resources out there. A 3rd degree, that’s the most severe. That’s the one that causes all kinds of problems. It’s described as a full thickness skin loss and that means that it goes through all the layers of the skin. This can even go down into the bone and it’s really actually not painful as the others because it’s burned up the nerves, but the infection and the healing, it’s just a big hot mess.

As we scroll down, I’ve got more information that we need to do and of course I always start with ICD because I enjoy ICD more.

Laureen:   Someone is asking a question: Does a physician need to state the percentage of the body that is burned or can the coder use the rule of nines to determine the percentage?

Alicia:  OK, this is something I did address or I was going to mention. The physician, it’s his job to do the percentage and they are taught to do this. Very unlikely are you going to come across the scenario where they don’t do this because this is part of proper documentation and it’s not something they can slip up on. This is a huge part of their documentation. Now, if they don’t, I would query the physician. If you can’t and it’s up to you, which I don’t think it ever should be, then you can use the rule of nines. But your coding manual has not the rule of nines, Browder’s chart, and I would show you a copy of that in the slides, so we’ll go over that a little bit more.

You should only code to the highest level of burn when you assign multiple burns of differing degrees (severity) in the same body area.

CPT – very simple, guys. There are only a handful of codes they’re involved: Initial treatment, first degree burn, when no more than local treatment is required (you just go to the doctor and he treats it), that code is 16000.

It gets just a little more in-depth. You have code 16020 – dressings and/or debridement, initial or subsequent; without anesthesia, office or hospital, small. Very simple.

Then, 16025 – dressings and/or debridement, initial or subsequent; without anesthesia, medium (e.g. whole face or whole extremity).

We jump to 16030 – dressings and/or debridement, initial or subsequent; without anesthesia, large (e.g. more than one extremity).

That’s really all of them for those codings. It’s going to be one of those. That’s pretty easy, but I do have a few other codes here that you might use eventually and this is where they go in and cut because the burn is so severe or they cut away tissue and there are pictures that I could have put up here, but I didn’t, I saved you.

Escharotomy (16035) and there’s additional to the primary code.  Remember I told you the rule of nines in your CPT manual has been replaced with a new diagram called the Lund-Browder Diagram. Again, it’s just an expanded version of the rule of nines. This is the leading one now. There are others out there, you got the rule of nines, you have the Lund-

Browder, you have the Wallace. You got all these different versions and stuff, but the Lund-Browder is what in your CPT manual, and it’s very simple. I got a little example to show you here.

First, let’s talk about the Rule of Nines, because that’s the basics and it’s not as hard as you think when you look at a diagram. What it does is it takes the anatomical site and uses a graphical tool to indicate total body surface area (TBSA- abbreviation you’ll see a lot) to divide it up into segments of 9%. One arm is a 9, the other arm is a 9, one leg is a 9… like an 18, 18 and stuff like that. Everything is divisible by 9.

The percentages used for each body part are different between adults and children. This is the easiest method to use for adults and children older than 10 years old. Ultimately, what it did is anybody over 10, and it lumped them all together, but we know a 10-year old isn’t the same size as a 25-year old. That’s where the Lund-Browder Diagram comes in. It actually is divided up for ages, a whole list of ages, and breaks down those percentages as smaller and larger depending on your body size by age.

Now, we go to the next chart… there’s the Rule of Nines for children. See the difference where each leg is an 8, the chest and trunk is 18. That’s the biggest difference.  I actually got this off a firefighters’ website. It was excellent.

This is the Lund-Browder; this is how this divided up. The first one is they do an infant. Now, all this is a rule of nines, but it’s the same concept, except they’re dividing everything up a little smaller. You got the feet, you got the hands, you got the forearm, and you got the neck. It’s done by age.

So, quite simple, this is in your CPT manual. I was going to give you the page number because your CPT manuals for each will always be the same; however, to keep this evergreen every year, the page will change so I didn’t want to do that. But that is actually how you do the Rule of Nines and we do have additional videos on YouTube for the Rule of Nines that we’ve covered before, so I hope with all of this information together that it will help you understand burn coding a little more. 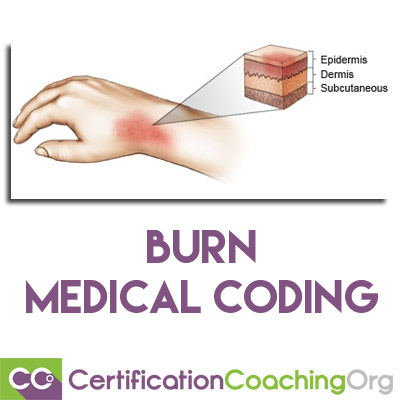