Cancer codes: Alicia: Okay so someone had wanted to review cancer codes and ICD 9? And I’ve had a hard time picking which one to use, benign, malignant or not specified. So… and what I did was I just did kind of a basics in cancer coding. So metastatic means that it’s moved. So you know, think M – move, M – metastatic. The cancer has moved from one place to another so that’s usually from one organ to another. So we’ve got like breast cancer has metastasized to the lung and the cancer started in the breast and now it’s moved to the lung. 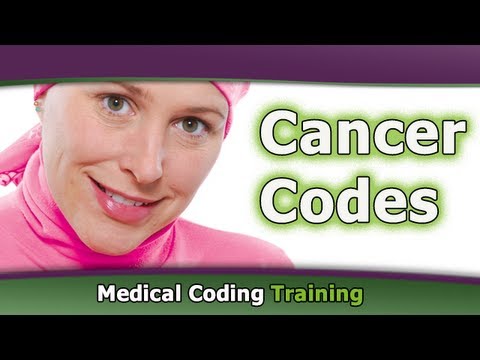 So when people talk about that, they’ll say the first cancer or the primary cancer. So common metastatic sites are lymph nodes, bone, lungs and brain. So in other words, if a person has cancer and they’re going to get a secondary cancer… in other words, it’s going to move somewhere else in the body, it usually goes to the lymph nodes, bone, lungs and brain. And actually, when you think about cancer, I used to tell my students, cancer is just cells that are not growing normally anymore, cells growing a certain way. But when they’re not growing normally, they mutate.

So let’s say if for example, you say your cell is a circle and then it’s reproducing itself. But then all of a sudden, one produces it as a square. Okay well, it doesn’t line up and work with the other cells because it’s a square. So… and that’s fine. That would be you know, benign cancer. But when all of those square cells start deciding to reproduce themselves instead of making circle squares… circles, they’re making squares… then that’s cancer. And then once those cancer cells learn how to do that, they start teaching other cells how to do that and that’s how it spreads.

So if a person has metastatic cancer, both sites need to be coded. When there’s documentation for a primary or a secondary cancer but the site is not indicated, you use this magic little default code for cancer which is 199.1. And that code indicates that there is another cancer, whether primary or secondary but you don’t know what it is. And you’ll see terminology like that that will state you know, metastatic cancer to the lung. Okay well that means that’s a second cancer, moved to the lung. But where did it come from? I don’t know. I don’t have any documentation on that. So it would be 199.1.

And if you reverse that and say you know, she has breast cancer and it has metastasized. Okay so you can code the breast cancer. Where did it go? I don’t know. There’s no documentation. 199.1 takes care of that. So that’s your default code when you don’t know and it works for primary or secondary.

So if we scroll down a little bit more… so plain English, use this code for malignant neoplasms of an unspecified site, both primary and secondary. It goes both ways. So what is benign? The term benign refers to a condition that’s a tumor or growth that is not cancer. So you got all those little circle cells and all of a sudden, they may…you’ve got like 3 square cells. Well, they’re not doing anything but you know, they may go ahead and remove it and check and make sure it’s not trying to replicate itself. But if it doesn’t then it’s considered benign. It’s a tumor, it may be something that someone doesn’t want or causes problems. That’s another thing. Just because it’s benign doesn’t mean it’s going to cause problems. It just means that it’s not going to spread someplace. But it can still bother other tissue. So in general, benign tumor grows slowly and is not harmful.

However, in some cases, you have benign tumors that grow big enough to be found near blood vessels or in the brain or the nerve or different organs that need to be removed because they’re causing a problem… because there cells don’t need to be there or their size is hindering some function of that organ. They’re not metastatic. They’re not trying to teach other little cells to be like them. They are just in the way, more or less, so they’ll be removed.

That’s the difference between benign and malignant. You want to make sure you know whether it’s benign or malignant. And most physicians are very good about documentation and they’ll say benign tumor of the breast or malignant mass in the lung. You know, so… but you can’t code one way or the other unless you have a definitive diagnosis. So you need to make sure you find out from your provider which one it is.

Okay, unspecified. Well that just means you don’t know. So if there is no documentation to state that it is either metastatic or benign or it hasn’t metastasized, there’s no verbiage there… you’re going to put unspecified. Sometimes, the doctor may not know yet. The pathology report hasn’t come back and so he will say that you know, he doesn’t know. And then you would use that unspecified code. You don’t really want to use the unspecified code unless you have to because you want to code to the highest specificity and your insurance companies are going to like unspecified most likely. So you want to make sure that you have that.

And a little trick to know though is that if a past report is available and your document for your op report states that you know, he doesn’t know the tumor’s been sent off, the pathology comes back and it’s malignant, you can code malignant for that op report because you have the documentation now to back it up. So that’s something to keep in mind. Pathology reports trump what the op report said because it’s a definitive diagnosis given by a provider.

And let’s see, one more thing to remember about coding the cancer codes is… is there more underneath there? No, no that’s the end of it now, Laureen.

Alicia: Yeah, I thought it said more. There’s tumor registries now and so whenever you see a term like lymph node involvement, that means the cancer’s moved into the lymph nodes. Okay so when you’re doing tumor registry, once the person gets diagnosed with cancer, they’re going to do staging. And you’ll hear people say it’s stage 4 or it’s a stage 1. So this is called TNM staging. Tumor for… it’s a tumor, Lymph Nodes and Metastasis – M and those will get numbers behind them. And that is based… they do that for statistics. And in fact, a lot of times you’ll see jobs that are tumor registry coders. Hospitals will have them just so they can take care of the coding that’s done just for the staging and the treatment of a cancer.

Now this is another note that you need to know when you’re doing the cancer coding. If a person no longer has active cancer because it’s been eradicated, removed or previously excised, you can use a history code to indicate the person had cancer. I think we did this in another webinar because we’d had a question about history codes. This is a V10 code and is divided up to different body systems, V10 something. Remember, you cannot use a history code if the person is getting actively treated for the cancer.

Now a lot of times, people will get confused. People will say, “Well you know, she had a mastectomy and she’s not getting chemo and she’s not getting radiation.’ She doesn’t have cancer. But the doctor put her on a medication to make sure the cancer doesn’t come back. So she’s technically still getting active treatment for the cancer. And this would be V58.69. She’s getting long term use of this medication.

And if you scroll down, I think I’ve listed some of the medications just so you’ll be familiar. I think Tamoxifen was one of them. Here we go. Herceptin, Tamoxifen is one you see a lot and some of those others which I’m not even going to try to pronounce. But those are medications that doctors will give for different types of cancer after the person’s no longer getting chemo or radiation. They’ve removed the mass, the cancer mass but they want to make sure that the tumor doesn’t come back. And you can be on one of these medications for years. And up to, I think, 8 years or something. I think some women take Tamoxifen for the breast cancer.

So the guidelines state… and this was a question that came up a few years ago is if you’re getting… if the patient is getting treated with Tamoxifen, are you able to use a history code for them on… because they technically do not have cancer? And the answer was no, you cannot use a history code if they’re actively being treated for the cancer and technically, they were. So keep that in mind and that’s kind of the basics about ICD9 coding for cancer. 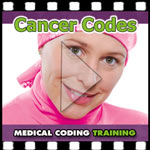