This next question I have is around the cardiovascular system. This is specific to CPT. The question I received was “Can you cover Cardiovascular System as it relates to Appendix L to codes 36200-36299?” 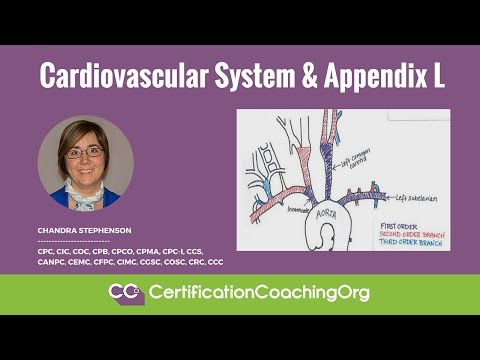 A: Chandra: If you haven’t seen Appendix L, Appendix L is in the back of the CPT manual, back where the appendices are in blue and what it is, it’s a vascular tree. It’s great if you understand what it’s there for. That’s a really common question I get is, “How is this going to help me at all? I’m much better with pictures, that sort of thing.” OK, draw a picture.

What you’re going to find is, I’m going to talk through a couple of things. First, I’m going to talk about what Appendix L is and how it relates to those codes that were mentioned, those 36200-36299. The first thing I want to say is Appendix L is a vascular tree. The goal of a vascular tree is to help you figure out how far a provider inserted a catheter when they were looking for something, they were doing a catheterization. But that appendix actually makes two assumptions. One of these assumptions they call out in black and white, right at the very beginning of the chapter. They say, they assumed that this started from the aorta; provider already had the cath in the aorta and they were making selections off of the aorta. The thing that it doesn’t go on to say, the assumption is that I will say there is an assumption that the patient has normal anatomy.

I’ll be honest with you, on the CPC exam, on the COC exam, on those core credentials, they are not going to give you a patient who has abnormal anatomy. The only time you’re going to start seeing abnormal anatomy is if you get into like the CIRCC exam, Certified Interventional Radiology Cardiovascular Coder, because they’re coding a lot of cardiac caths and there are patients that have what we call variant arch anomaly, so things don’t look right. Don’t worry about those for these purposes. For Appendix L, patient has normal anatomy, we started in the aorta.

Let’s talk a little bit about the anatomy. If you could scroll up so you can see my little picture there, Laureen. I went old school for this, I got on pen and paper and drew a little picture and got my crayons out, as you can tell. But what I wanted to explain is what they’re talking about when they say first order, second order, or third order, or those types of things. The little white arch at the bottom, that I’ve got labeled “aorta.” Remember that the aorta runs the entire thoracic and abdominal cavity.

One thing that I like to point out because people don’t always realize this, when we start a cath, usually the most common access point for a catheterization is the femoral artery. Right there in the groin, right in the bend of the hip, and I always ask, “Why did they go in there?” Well, the reason they went in there is the two femoral arteries, they’re into the iliac arteries, and where they attach is the very bottom of the aorta, that’s where it starts. It runs all the way up and curves around, and your heart sits right there, attaches to the front of the aorta. 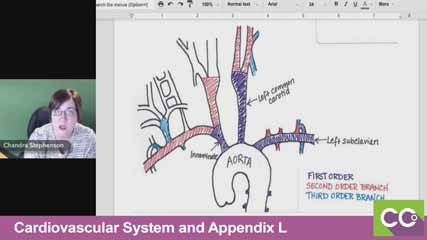 We’ve taught for years and I know Laureen and Alicia have taught this before, and they talked about where it branches off. Every time it branches, every time it forks in the road, I tried to illustrate that with color because when they are in the aorta, that’s considered a nonselective catheterization because they didn’t select anywhere. Because think about it, they’re on the interstate, they haven’t picked which exit they’re going to get off at yet, they’re just driving on the interstate. As soon as they pick an exit, they pick one of those three main arteries to go into, they have branched off into that first road off the interstate. Think of that, that’s your first order, those purples are all your first order.

Then that branches off even further, it goes with the blue. Each time it branches, you move farther out. For purposes of a cath, they never go beyond third order when we start talking about coding perspective. When you actually look at the codes, it says, first, second, third or beyond. That’s what you’ll see here when we start looking at Appendix L. They’re giving you that same thing, they’re saying, “Oh, well, we went in the innominate and then we branched off into the right common carotid and then we went into the right internal carotid.” They’re telling you how far they went. 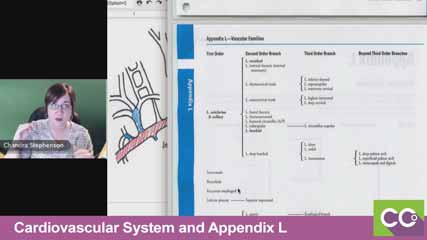 Now, that was a very large range that was given, 36200-36299. It actually doesn’t apply to the whole range, because the very first code, 36200 says insertion into the aorta. That’s a nonselective cath. That means all we did was put the cath in the aorta, we never turn off the main road. Appendix doesn’t even come into play. It also doesn’t come into play if you’re looking at the renal arteries because in the middle of those 36200 codes, there are specific codes just for the renal arteries. Where it comes into play is 36215 – 36218, which are saying that you did a selective cath, ___ off of the heart that basically feed the thoracic and brachiocephalic arteries. It feeds the brain, it feeds the arms, and it feeds the chest cavity. That’s where that comes into play.

Then you also see 36245 – 36248, which says, “Oh, you went into one of the arteries that feed the abdominal cavity or the lower part of the body.” That’s the only time you really going to need to know how far did they go, first order, second order, third order. The next question that I get is if you look at those codes, if you were to look at 36215 – 36218. If you look at those codes, the one thing you want to point out is you can never add, like if you bill and say “we did a third order branch of a brachiocephalic,” so we went in to the right internal carotid artery. You cannot then add a code that says, “Oh, I also put it in the aorta.” You had to put it in the aorta to get there, it’s bundled in, it’s included. Give them the drawing, the map, you had to go there to get there.

But what you can do is you’ll notice that all of these codes, starting with the 36215 say initial; initial second order branch, initial third order branch, and then there’s an add-on code that says “each additional.” When we say “initial” that means the first one they went into because they may have gone into the right internal carotid artery and then they may have pulled that catheter back out and gone into the right external carotid artery. They went into two different branches of the same tree.

Every time that they had to negotiate around one of those little turns, because my picture looks really big, those arteries are teeny tiny, some of them are the size of a hair. Getting in there takes a lot of skill, so we’re going to pay them every time that they had to do the work of, “Oh, I got to get into the right one and make sure I’m in there” and adjust that.
That’s why when you look at this, Laureen’s got the page pulled up there, you’ll see 36215 says each first order, within a vascular family, and then 36216 says the initial second order. 36217, I believe says, initial third order. 36218 says each additional second or third or beyond. The way you’re going to report these depend on how many they went into within a vascular family.

Laureen: We’re getting to see the bubble and highlighted technique that we teach. 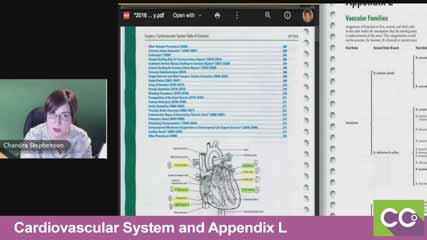 Chandra: So, you’re going to code for that initial – how far end did they go? How selective were they? Did they go all the way into the right common carotid and then pull back out and go somewhere else? Because if they did, I would be able to say, “OK, I have a 36217, I had an initial third order or more selective thoracic or brachiocephalic branch within a single vascular family.” Within the innominate, I went all the way to the right internal carotid.

Then, if they pull back out and they went into the right external carotid, I have an add-on code that says, “Oh! They had an additional third order within a vascular family. We went in somewhere else, we get to bill for each one of those that we had to go that far down. That’s how that tree really comes in handy.

The reason that I drew the picture is twofold. One, I’m a very visual person. Show me the anatomy and then I can figure out how that silly tree associates with it, because I really can go through it and label all of them. What I did in my book is in Appendix L where it says the innominate or the left common carotid and the left subclavian, I wrote 36215 to 36218. I’m in those codes, that’s what it’s telling me. 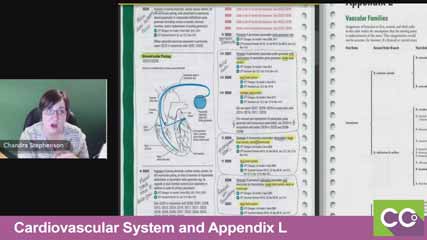 [Then, down where it talks about the lower, the abdominal ones… the celiac trunk and the superior mesenteric, both of those I wrote in 36245 to 36248 because I know those codes I need to deal with that. Because those are really the only two places that this tree comes into play. That’s why you’ll notice for all of the other ones, they don’t really even give you the branches off of there or how far it breaks down because those codes aren’t dependent upon that, even for the ____ [1:25:31] have their own codes and they don’t get into this first, second, third thing. It only applies to those five areas.

Laureen: I’ve heard it taught above the diaphragm, below the diaphragm for those two groupings. That always stuck with me, I liked that.

Chandra: I actually drew that line right where you’re at on that page between the bronchioles and the recurrent esophageal arteries, is where the diaphragm is.