Q:  Observation and Transfusion – “When carving out time for OBSERVATION hours do you carve out med infusion, blood transfusion hours, etc?”

Chandra: A:  Trying to figure out which ones got thrown in there because that one, the answer to that question, so when you’re talking about observation hours, I can answer this one. If they’re talking about hospital observation hours where most of the carriers require that the patient be there for a minimum of eight hours in order for you to bill the initial admit to observation over those same day admit and discharge codes.

They start asking questions, if you carve out time for infusions, blood transfusions that sort of thing? Typically, no. Most of the time those are the services being performed while the patient is in observation. Now, if it’s something that you would be getting paid for twice that’s something that you would have to think about because you can’t double it. You can’t get paid for the same thing twice. In this situation oftentimes you’re talking two different things. For observation, yes, you have to have a number of hours to get there, but your level of service is dependent upon your history, exam, and medical decision making, or your time spent in counseling and coordination of care.

Carving out Time for Observation and Transfusion Hours – Video 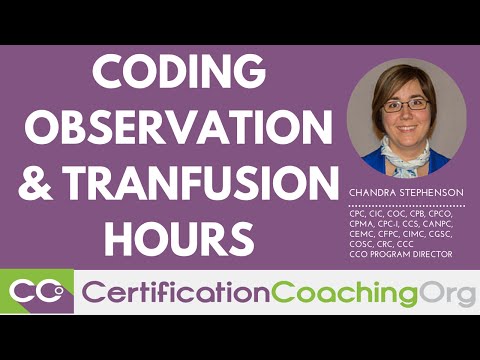 The time being spent on infusions, blood transfusions, and all of that is not going to be your history, exam, medical decision making, or counseling and coordination of care. It’s actually going to be your time spent rendering services, so it’s kind of apples and oranges in my mind. Your evaluation and management service, yes you have to have so many hours from a billing perspective to determine which code set you use whether it’s a same day admit and discharge, or an initial hospital admission to observation, but that’s different than how many hours you’re billing for the infusion, or the transfusion that you’re doing. Does that make sense?

JoAnne: Yes. I have never billed in all my years billing observation, I have never incorporated med infusion or blood transfusions in with the observation code. But that’s not to say that it hasn’t happened, but it’s usually that’s an E/M, and that’s just like the part that the physician bills.

Laureen: Yeah. That’s a good question to put on the forum too because besides us you get the whole pool of all the CCO community helping answer your question, so there might be someone who does this every day. This is totally in their wheelhouse, so feel free to still post it on the forum. 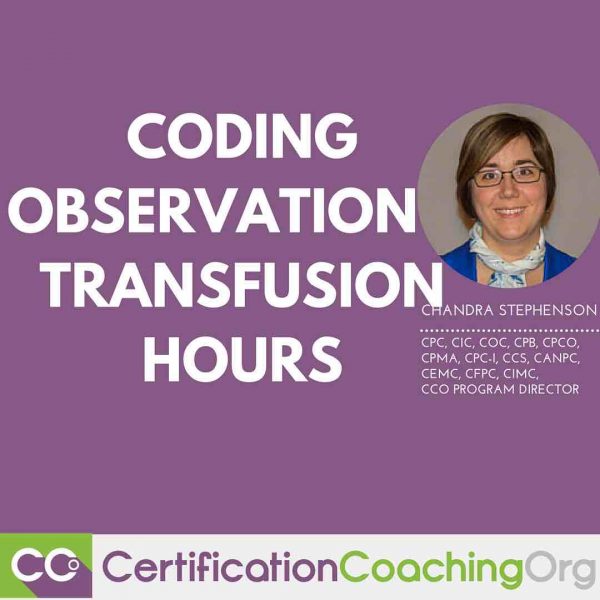 4 thoughts on “Carving out Time for Observation and Transfusion Hours”