Alicia: I see something that’s popping up quite a bit on the Twitter chat. They’re wanting to know if you know, can they take the PBC course and that’ll help them pass the CCS exam?

Laureen: The CSS P or the CCS?

Alicia: The CCS is what they’re saying. I don’t think they realize there’s a difference between the CCS and the CCS P. But maybe you could just let them know real quick.

CCS Exam and the Physician Based Coding Course Video 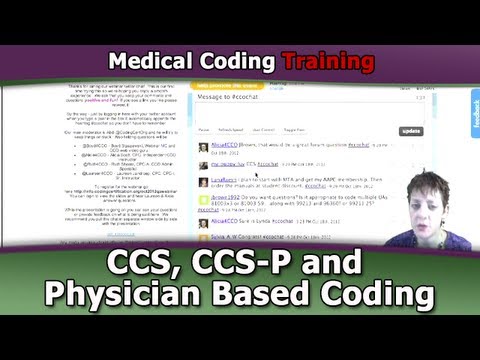 Laureen: The CCS is predominantly focused on diagnostic coding because in the inpatient hospital arena, diagnoses are what drive the revenue. On the physician side and outpatient side, it’s the procedures that drive the revenue. So yes, the course will help you understand CPT because CCS coders need to know how to code CPT as well. Our course is heavy in CPT and moderate in ICD. But you do get a lot of ICD so I would say yes but it isn’t… that isn’t the focus of it so that you don’t come away thinking you know, we misled you. But there are… how many chapters are on the ICD? There’s like 4 or is it 5, Alicia?

Laureen: Yes, we have 5 chapters on ICD.

Alicia: But the other chapters use those after you know, 16. They’re using the CPT and the ICD you know, as well. So you really get it throughout the whole course.

Laureen: Right. The difference though is with inpatient coding, there are difference in ICD coding guidelines, the biggest being inpatient coders can code rule out situations where the physician says maybe they’re ruling out MS. So an inpatient coder would actually look up and code the diagnosis for multiple sclerosis whereas a physician-based coder would not. We’re not allowed to code non or unconfirmed diagnoses but inpatient can. Because if you’re suspecting that’s the condition, all of the treatment and work up and everything will correspond to that and the diagnosis is driving the revenue. So that’s why they’re allowed to.

So the coding guidelines are a little bit different. What’s very, very, very important for CCS coders is knowing what is the principal diagnosis wherein the physician, we normally say, first-listed. So little nuance of difference there. So yeah, I think would help you for the CCS.

Now there isn’t a whole lot of CCS courses out there from my recent research so we’ll probably be bringing that course back. You can email me privately. I have a saved list of CCS study resources that I use when I took my exam that are kind of hard to find. They’re not really out front and center. So email me… actually, email helpdesk@ and Sylvia or Alicia will get you those… that list of resources. 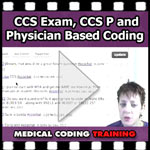 4 thoughts on “CCS Exam and Physician Based Coding Course — VIDEO”