This question, I stole from Alicia [laughs].

Laureen: Certificate in Coding versus Medical Coding Certification, because I needed an easy one tonight.

Q: “What is the difference between certificate in coding versus being certified?” We get this all the time. We have a new staff member, Lisa Patrick, and we’ve been teaching her all about the coding world and what it’s like, and this question came up too and I said, “Picture someone watching the late night television and they say, ‘hey, a new career in Medical Billing and Coding,’” and they sign up for school in their backyard, and they have no idea that when they graduate that certificate doesn’t mean they’re certified.

So, here’s a little answer sheet that Alicia put together and I’m going to try and present it. One of the most common types of certification in modern society is professional certification, where a person is certified as being able to competently complete a job or task. And that’s really what the CPC is all about, the CPC-H. It actually says Certified Professional Coder. It’s indicating that you’ve demonstrated your ability to do well-rounded coding and you know your guidelines. 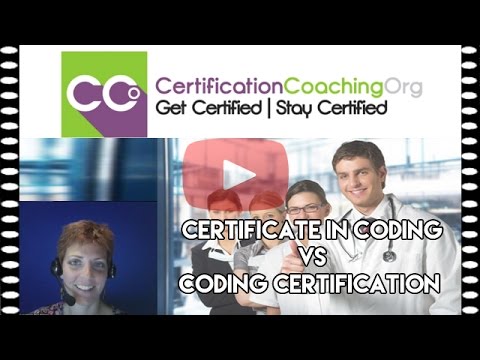 Even though it sounds like the two are the same, they’re not, and the example used here is if you go to a nursing school, you get a certificate that you’ve completed the educational program, but you’re not allowed to practice as a nurse yet, because you have not, in fact, passed your board exam.

That’s not the case for coding. You can be a coder and not be certified. It is not the law except in the Hawaii. Hawaii is the only state where you have to be a certified medical coder in order to code. Since I’ve been around medical coding, I’ve heard that that was going to be coming — I’ve been around coding since 1999, so I guess things move a little bit slow, but it’s always good to be prepared.

You can take education for coding and get a certificate that showed you completed it, but you’re not certified unless you pass a national board exam. While we’re chatting about it, there are lots of coding credentials out there as you know, but there’s really two in my opinion — our humble opinion — two main coding organizations, and that is the AAPC and AHIMA.

AHIMA has been around a lot longer, but their focus is always really been facility, inpatient and outpatient, really heavy in the facility, and they have lots of other credentials besides the coding like RHIT, RHIA. That’s Registered Health Information Managers or Technologists. They’ve got a different focus. Just by going on their website and exploring around, you can get a sense of that.

Whereas, the AAPC, it actually stood for American Academy of Procedural Coders way back in the day, because they were all about CPT. Back in the day, that’s all you really have to worry about. The diagnosis codes were there, but a lot of times they hardly use them and then it became more and more important. The diagnosis had to support the procedure. Then, they started to have that on their board exams and they changed the name to American Academy of Professional Coders. Now, actually, technically that’s not their name anymore. It’s just plain AAPC. There’s a little history for you.

Did you have anything to add to that, Alicia? Did I cover what you are aiming for?

Alicia: Well, I think it’s funny that the AAPC has grown so big that they are now like [prince? 1:17:32]. The thing they’re formally known as prince…

Alicia: But the AHIMA has been around since 1920s and the AAPC has been around since 1980s and both are excellent organizations. You would be well served to go with either one. Both are known for, like Laureen said, specifics. But if you want to specialize or think you want to get into things that are specialized, really the AAPC is a good one to go with, but if you want to strictly go with inpatient, then AHIMA is probably the one you want to go with. But one way or the other whichever one you go with, I can’t stress enough, go to local chapter meetings and they both have local chapter meetings. Find out if there’re local chapter meetings and make sure you attend with whichever organization you are allowing yourself with. One thing to note, it cost you more but you can be dual certified. Some people it behooves them to do that. An employer may pay for that for you, so consider that also.

Laureen: Yup, definitely, and if you’re getting involved in consulting or auditing where you’re setting your own shingle out and it’s good to have your feet in both camps. Most people probably can tell I’m more heavy in the AAPC world. I used to have my CCS, my CCS-P. Unfortunately, when I became an employed person, I let those lapsed, and I could kick myself now. But I am a member of AHIMA, and I think it’s a very good thing to get the newsletters from both sides and stay informed that way.

Alicia: One more thing. Some people don’t realize that you can test for AHIMA certifications and not be a member of AHIMA. The AAPC, you have to be a member to test for their certification. You do have to pay more if you’re not an AHIMA member and you take their test. That is really one of the only differences that I know of.

Learn More information about Certificate in Coding versus Coding Certification

Medical Coding Certificate – How to be a Medical Coder – Video