Q: We had another question come in on chiropractic medical coding for ICD-10, says, “I am a recent recipient of my coding certification (July) and have recently began working for a chiropractic office. I was hoping there would be some insight on whether the ICD-10 codes will still be the same for these areas. Has anyone heard anything? Thanks!”

A: In the past, there was a little set, there were some specific codes for chiropractors and it’s actually changed that now they’re the same, it’s all integrated in the same. So, the comment, what I went in and did was I found a fantastic website for common chiropractic codes, went in and looked at them and it was long, it was really long. I forgot that link there, but if you Google “common chiropractic codes,” that will come up. I pulled out some of the ones that were on this list, it was all divided up. In fact, Cheryl has, I see that in the questions, she has got it there www.chiro.org and then there are some other things, but fantastic website with common codes. So, I pulled some of the ones that I thought would be common; then, I coded them in ICD-9, then I coded them in ICD-10. 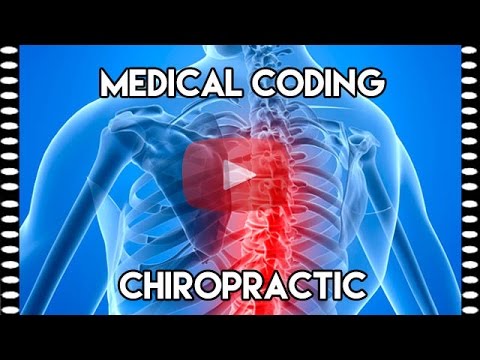 The wording is just about the same, but you’ll notice with your ICD-10 codes, it starts with a letter and you have two characters before the decimal, and then you can have multiple characters after that. The great thing about ICD-10 is you’ll not run out of numbers or spaces because you can just keep going and going and going, and then sometimes you’ll see a letter at the end, an “A” or an “S.”

Another one: 739.0 – nonallopathic lesion, head region; M99.00 – segmental and somatic dysfunction of head region. See how the wording is a little bit different? 719.51 – stiffness of joint not elsewhere classified, shoulder region. Then, in ICD-10 we have M25.619 – stiffness of unspecified shoulder, not elsewhere classified. Now, what’s interesting about this, in ICD-9 you can’t tell whether it’s left or right shoulder, you’d have to put a modifier on there. With ICD-10, this is unspecified shoulder because we were using this code here; but it actually would say left shoulder, right shoulder, bilateral or unspecified. Just like in ICD-9 you have unspecified codes and they often end in the number 9.

Boyd: What does “G” mean? There was a question that just came in. What the letters in the beginning mean.

Alicia: The letters go alphabetically, they divided the systems up and they actually start with “A” – now I think about that, I better go look – but they go alphabetical and sometimes they line up and sometimes they don’t. Meaning, OB codes start with an “O,” isn’t that interesting? The codes that are doing muscle or the musculoskeletal system starts with an “M.” Cancer codes start with a “C.” Now, it doesn’t always line up like that but –

Boyd: How about B?

Alicia: Infectious and parasitic diseases. You know what, the chapters didn’t really change, do you think that was funny, Boyd?

Alicia: Think bacteria, somebody already said that; “B” for bacteria. I think we did this in a previous webinar where we kind of talked about how they divided it. The chapters are the same that instead of them being like 50,000 series or whatever, they just gave them a letter instead of starting with a number. It’s not that hard, it’s actually kind of fun the way they divided it up.

How about bone and joint disorders of back… of mother, complicating pregnancy, childbirth, unspecified episode of care, 648.70; because you go to a chiropractor for that. There’re a lot of pregnant women that go for chiropractor treatments when they’re pregnant, that little back pain. And, look at there, starts with the letter “O” and 33.0 – maternal care for disproportion due to deformity of maternal pelvic bones. This code 648.70 translated on the translator into O33.0. Now, look how difficult this is though.

And I think I had mentioned in a previous webinar, whenever you have a zero you want to strikethrough that, because it’s not easy to see that this is a letter “O” and that’s a number 0.

So, wherever you see zeroes, it’s just good to get into the habit of doing a strikethrough on zeroes, and I do them on 7s as well, because a 7 sometimes look a 1 when people are writing.

How about this one? This is one I know that people go to the chiropractor often for an unequal leg length because you see him set down that bed, they kind of fiddle with your legs and then they pull and sure enough it never fails, one leg is longer than the other, 736.81. But, ICD-10 is much more specific, not just right and left; but here what they’ve done M21.759 – unequal limb length (acquired), unspecified femur. And then you have it here for the tibia and fibula. So, they’re saying that it’s because of the femur, and this one is a tibia and fibula. They can be so specific, it’s fantastic. This all has to do with laterality – one of the words that I know I have mentioned in a previous webinar –   laterality, meaning left and right. There are now codes for it, you don’t have to use the modifiers just to distinguish; so almost everything that can be a right and a left will have a code but it will say a code for right, a code for left, a code for bilateral, and a code for unspecified. And you want to stay away from an unspecifieds, there’s talk that the insurance companies aren’t going to pay unspecifieds. And the doctors do pretty good about telling right from left; but if they don’t, now you got a code that you can still use.

Anyway, the thought is, the chiropractic codes are going to be integrated into the same diagnosis codes that you would use in ICD-10 that were used in ICD-9.