Q: “Can you code Dependence say for Alcohol if the provider states it as Alcohol Use Disorder-Severe? Since it does not say dependence but the provider says he is going by the DSM-V and it is dependence and they are not going to change the wording.”

That was the first question. It is actually a two-parter because the second question that we received says:

Q: “Can someone explain the smoking dependence codes? Does the physician have to document that a patient has a dependence in order to use these codes?”

A: Some of you are probably going, “OK, the first one is on alcohol, the second one is on smoking. Why are you combining these two?” Well, they’re both all about dependence and how we define dependence in order to be able to code for this services.

The first question actually was very intriguing to me because I have a background working in mental health services – not as a patient, let me clarify that – but actually working with the mental health providers. I do actually have a copy of the DSM-IV and the DSM-V if you’ve never heard of either of these two manuals. We are now in DSM-V just like we went to ICD-10. DSM-IV was the previous version.

VIDEO: Coding Alcohol and Smoking Dependence vs. Severe Use Disorder 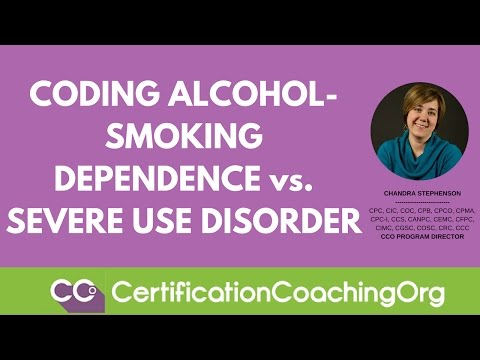 DSM stands for Diagnostic and Statistical Manual and it’s of mental and behavioral disorders. This is actually what the social workers, the psychologist, the psychiatrist used in determining which condition the patient has, especially when you’re trying to make a determination between things like Defiant Disorder versus Intermittent Explosive Disorder or Alcohol Abuse versus Alcohol Dependence. There are certain criteria that the patient has to meet to qualify for the diagnosis.

What I did in the answer sheet and what I’m going to talk through is that if you’re familiar with DSM-V and especially if you have a provider that says, “I document based on the DSM criteria, I am not going to write alcohol dependence.” OK, that’s fine. That’s a provider’s choice but you need to know that they’re using the DSM so that you’d know what to use in reviewing the documentation to see if it meets the criteria for dependence. And this is how the DSM works, it’s actually really simple and it’s fun reading. It’s even more fun to try to diagnose yourself and your coworkers – trust me, I’ve done it.

The symptoms that they look out here, they say, “A problematic pattern of alcohol use leading to clinically significant impairment or distress, as manifested by at least two of the following, occurring within a 12-month period:” To be severe, they have to have six of these 11 that are listed under here. They require more alcohol:

1. Alcohol is often taken in larger amounts or over a longer period than was intended. So, they drink more than they really planned on drinking.

2. There is persistent desire or unsuccessful efforts to cut down or control alcohol use.

3. A great deal of time is spent in activities necessary to obtain alcohol, use alcohol, or recover from its effects – including hangovers.

4. Craving, or a strong desire or urge to use alcohol.

5. Recurrent alcohol use resulting in failure to fulfill major role obligations at work, school, or home.

6. Continued alcohol use despite having persistent or recurrent social or interpersonal problems caused or exacerbated by the effects of alcohol.

Do you see a trend here? Right. They’re choosing the alcohol over everything else in their life and to meet the criteria for dependence they only have to have six of these and there’s 11 listed here. So, if they’re using more than they intended, they’re having trouble cutting back, they’re suffering more from hangovers and taking longer to recover, and thus missing work or missing out on family obligations and continuing to use alcohol even though it’s causing them to fight with the people around them over the use, they’ve just met the criteria of being dependent. The doctor didn’t have to say anything more than alcohol use and describe the situation that this patient is facing.

I then went on below this to explain the same thing is true for tobacco disorder. I know that’s a big one. I get a lot of questions about, is, “How can I say that this patient is dependent on tobacco?” Your provider probably gave you all the information that you need in that record and some of that starts as easy as saying, “Patient has been smoking for 22 years, smokes 2-1/2 packs a day.”

Do you think that they plan to smoke for 22 years? If they smoked 2-1/2 packs a day, this is where the doctors oftentimes identifying that they are using more and more, especially if you look at how much they smoked before. You’ve got to have more to get the same effect.

Those are the things that you want to clarify with your provider, “Are we meeting all of the criteria to report dependence,” because some organization say you have to use the word dependence – when I say organization — the provider group, the hospital — whatever entity you work for in coding. Many of them say if they meet the DSM criteria they qualify for dependence, and if you have a DSM or if you get a chance to look at the DSM, it’s fun, but it shows you not only the category codes but it links to an ICD-10 code.

Now, be aware the DSM is not updated nearly as frequently as ICD is, so you do still have to look at how they crossover but they do crossover because the provider may assign the DSM category but what goes on the claim is an ICD-10 code.

So, when we look at both alcohol dependence and tobacco dependence, it’s going to come down to, “How does your provider document it?” Are you expecting them to document dependence because they don’t have to if they choose not to? But many of them don’t know what the criteria are that they have to document unless they are a mental health provider.

Laureen: “What website can I go to for review of DSM-IV or V?” Ramil asked.

Chandra: You actually can’t. Unfortunately, the DSM-IV and the DSM-V are not available online and they’re also not available in electronic form that I’ve been able to find yet, but they are published by the American Psychiatric Association or the APA. You can get a copy of it through Amazon, it’s not super expensive. It’s a thick book. It’s about this thick and it’s a smaller book. It’s not as big as your CPT manual or your ICD manuals. It’s not an 8.5 x 11. It’s a smaller. I think of it as like my planner size, my junior planner but it’s a very, very thick manual.

Quite frankly it’s an interesting read. I never read it until I started working in mental health and them I’m like, “Wow!” I didn’t know they did all this stuff and my coworkers and I at the time started diagnosing one another. We’re like, “Hey this is you,” that sort of thing.