Laureen: This one is mine:

Medical Coding Classes for Pathology and Lab Panels  – Q: Path & lab was not my best friend on the CPC exam. Can you guys focus a bit on that part of the CPT next month? Thanks in advance.

A: What I want to do is do a little bit on panels. For those who have the Blitz they will be familiar with this…Laureen: Organ or Disease-Oriented Panels – By the way, if you’ve not taken any of our medical coding courses, anything having to do with CPT, my manual we use a technique called bubbling and highlighting so that’s where all these notes you’ll see on my manual is all about. You’re like, “What is all that writing?”

If we look at this first panel, 80047, this is your basic metabolic panel. What it is, it’s just a space-saving convention because our 1500 forms is only six slots for procedure codes. This panel is comprised of these 8 individual tests. You’ve got the calcium (82330), etc.; so all 8 of these tests when you put 80047 it’s the same thing as if you listed all 8 of these separately. But you’re not allowed to list them separately, it’s not a choice, if a panel exists you are to use that code so you’re not allowed to unbundle or explode the codes.

Now if you have all but one because the physician doesn’t have to do all 8 tests, if they only want all but the urea nitrogen then you’d have to list those 7 tests individually, so it’s still up to the physician. But these are common panels, they are commonly ordered together so it just makes it easier.

My big note in the middle here: No modifier-52 on panels. That’s a common newbie coder mistake. If they only had seven of the tests ordered, but they say, “Oh, gee, for just missing one, I’m going to put a 52 on it.” You don’t want to do that. If you’re one shy or two shy use the individual codes versus putting a 52 on. 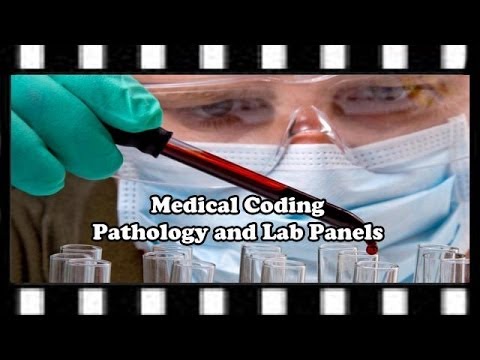 I like to bracket to draw my eye to how many tests we’re talking about, so this next test is 8? No. It’s already written so you’re going to see it, but if you look at the 80050 it looks like a short list but it’s actually 17 tests. The reason why is look at the first item, it’s a panel that contains another panel, so 80053 is a panel. And if we go down and check that real quick we’ll see that 80053 itself has 14 tests in it.

So when we come back up to our 80050 (general health panel) we’ve got those there and then we’ve got this OR situation. I always recommend to my students, make sure you circle those ORs so they jump out at you when you’re taking the board exam or do real coding. This one says: Blood count, complete (CBC) automated and automated differential WBC count. This is going to be 85025 or 85027. So we had the 14 from the comprehensive metabolic panel, so this is now 15 and 85004, so it’s 16. Then it says OR then you could do the same thing, which is basically two more additional codes. Then, where do we put the 17th one? It’s the thyroid stimulating hormone. OK?

So this is just a helpful little way to mark up your book so that you can quickly see how many tests you’re dealing with. And when you are trying to decide if you should use a panel or not on a board exam question or real-world situation, what I do, I recommend to my students just take a pencil so you can erase it after. Write in your manual, just put a line through the test that they start seeing in the documentation. That way, if you have any leftover, then you know you need to code a panel plus those extra tests, if you missed any then you know you have to code the individual tests and then just erase it once the exam is over.

OK. We’ll see what other panels we have. We have an 80055, this is our obstetric panel. This one consists of 8 tests. We have another OR situation to make sure you emphasize that. We’ve got the blood count with the 85025 or 85027 and 85004. Now, for coding purposes you don’t really need to know exactly which of these individual tests you are if you’re coding the panel. The panel includes 85025 or 85027, so it doesn’t really matter as long as you did one.

For drug testing in pathology they use two phrases: qualitative and quantitative. Qualitative – you’ll see I have circled here – that means is it present, is it there? We’re not adding up how much yet, so it’s just a screen to see, maybe they were found unconscious and they’re doing the screen to see what’s in their system. So that’s what these drug testing codes are, they’re looking to see for the presence or absence of drugs.

Here’s a list of analytes or drugs that they might be testing for: alcohols, amphetamines, barbiturates, benzodiazepines, cocaine and metabolites, methadones, etc. The first thing you want to do is identify the number of tests because path and lab really not examining the patient or examining their bodily fluids. So, how many tests did it take to examine that bodily fluid to see if they had any of these things present? The number of drugs per test is going to come into play here; I’ll show you that in a minute. If it’s a single drug that the test looked for or screened for that’s going to be coded 80101. If the test looked for multiple drugs then you’re going to report 80100.

Let’s look at the codes… and here’s a nice bubbled and highlighted code, or bubble I should say. Sure enough, we see 80100 is drug screen, qualitative, multiple drug classes. If you are testing for benzos and amphetamines in one test, I’m not exactly sure the common test but there are some tests that can screen for more than one thing. If that’s the test that was run then you’re going to code 80100. If it only looked at one drug in one test it’s 80101. If the technique is different than the chromatographic method then you’re going to use 80104, which is other than chromatographic method. You can have multiple units of these, you could have test A that looked for single drug and test B that looked for single drugs, so that’s going to be 80101 times two. Then maybe test C looked for three drugs in that one screening test and that’s going to be an 80100. That’s how that works, the unit of measure is the test, not the number of analytes or drugs. The number of drugs is used to pick the correct code, but not for the number of units. So keep that in mind. And then once they do identify the presence of something they’ll do an 80102 a drug confirmation.

Hopefully that’s a little help with some of the pathology stuff. This is exactly what we cover in the Blitz Review videos and we go into even more detail in the Physician-Based Medical Coding Course. 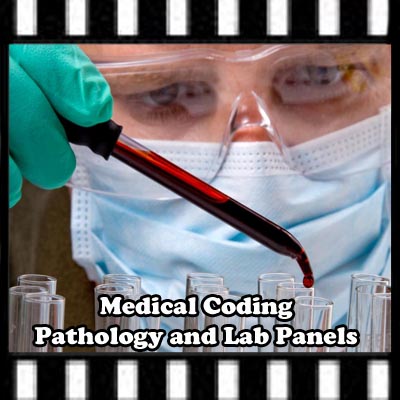