Coding detached retina. This question had come up and it’s actually a scenario that happened so it’s not necessarily all about detached retina. The question that came up was, she says, “So, I’m coding lots of classes today,” and here’s the one that she’s struggling with. Ultimately, you have a patient that comes in, they have a loss of vision; and as the case goes on, the patient is diagnosed with a detached retina. Ultimately, he can’t get in, seen by the doctor because of insurance. When we scroll down, we see that the patient is discharged. But this is what it says in his history, he has diabetes type 1, hypertension and then he has the detached retina. 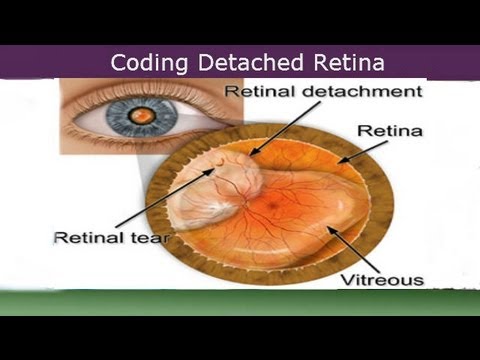 Her question is, what are we going to code for that? Her ultimate question is a diabetic-code question. The code for the detached retina is 361.9, and the 250.51 is actually for diabetes… was manifestation of ophthalmology, and 362.01 is diabetic retinopathy and the 401.9 is for the hypertension.

If we go to the poll real quick, her question is, what is she going to do about the diabetic code? Does she do retinopathy? Now, if she does a diabetic code 250.51 with a manifestation of ophthalmologic conditions, she is saying that she would do the retinopathy. So, in your opinion, just what you’re seeing so far, what do you think off the top of your head you would do? 250.01 or 250.51? [The] (.01) [is for] Diabetes type 1, [and](.51) is for Diabetes with a manifestation of ophthalmic condition.

Now, obviously, she was thinking the same thing, and this is what confused her. You have to look at the terminology. Nowhere in the information in the documentation that she gave us did the doctor correlate the detached retina as a manifestation of the diabetes. So, it’s not the same. It has to say it is a manifestation. It has to say “with”, it can’t say “and.” It’s those little words that will get you over time.

So, what does the patient have? He has a detached retina – (361.9). He has diabetes – (250.51). There is no manifestation in there. And he has hypertension. Now, just so you know for a detached retina, the things that are important though is the fact that he is diabetic and the fact that he has hypertension. Both of those conditions will affect his care, but he is there for the detached retina and the diabetes. You cannot use the (.5x) unless you have a line that you can draw; the doctor specifically states that it is because of the diabetes, and that’s not done so you’d be coding inaccurately if you code at the (.5).

Now, if the doctor had stated that the patient had diabetic retinopathy, sometimes they’ll just write d-retinopathy. You’ve got to be able to tie those together then you could use the (.51). OK?