Q: Compare Septicemia, SIRS and Sepsis. What are the differences?

A: Well, this gets very confusing. That little [star] up there, this will work for a specialty CEU, I believe.

The American College of Chest Physicians and the Society of Critical Care Medicine have established 4 different levels of sepsis. The levels and symptoms are as follows: 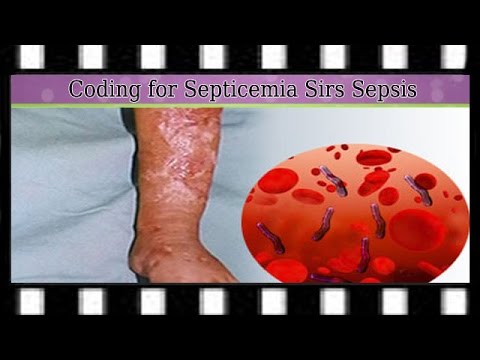 Last, septicemia, which is a serious, life-threatening infection that gets worse very quickly. It can arise from infections throughout the body, including infections in the lungs, abdomen, and urinary tract. It may come before or at the same time as the infection is found. What’s really scary is that older people sometimes suffer that and they’ll get like a urinary tract infection and it just goes through the body and their body starts shutting down organs.

Here is osteomyelitis, which is an infection of the bone. Central nervous system would be meningitis. You’ve heard stories about somebody that got sick, next thing you know they’ll do a spinal tap, they got meningitis and they’re gone very quickly. Endocarditis – infection of the heart muscles. And, other tissues.

Here is a picture of a person that has septicemia and it had started in their legs and you can see there’s a wound there. There’s lots of swelling, there’s a rash usually and it will go very quickly.

Sepsis is a medical condition in which the immune system goes into overdrive, releasing chemicals into the blood to combat an infection (microbes in the blood, urine, lungs, skin, or other tissues) that trigger widespread inflammation (cellular injury in the body tissues). If the body is not able to regulate the immune response – which you can see this, this redness and swelling and like I said, sometimes a rash – it then overwhelms normal blood processes so the blood is not able to do its job. The first mention of the word sepsis in a medical context was more than 2700 years ago in the poems of Homer – which I thought was really cool and I would have loved to have went and looked, a time to go in and find that.

The word derives from the Greek word sepein, meaning “to rot” – and that’s exactly what happens. Sepsis occurs in 1% to 2% of all the hospitalizations in the United States, affecting at least 750,000 persons and costing $17 billion per year to treat. A term sometimes used for sepsis is “blood poisoning,” but there is no poison involved in sepsis.

This is the most – how would I say it – benign picture that I can find, and my husband and children thinks that I’m very morbid and like gory pictures; but just go in and Google image sepsis, amazing what you can find and really sad conditions too for people on this stuff can happen, just like that.