Alicia: “What’s the proper coding to use for ultrasound vein mapping for AVF and AVG creations for hemodialysis? The doctor uses ultrasound on the patient’s arm while patient is in pre-op holding area and marks the vasculature on the patient’s skin with a marker. Is this even billable? Thanks in advance for your assistance.”

Okay, well I did a little research here … 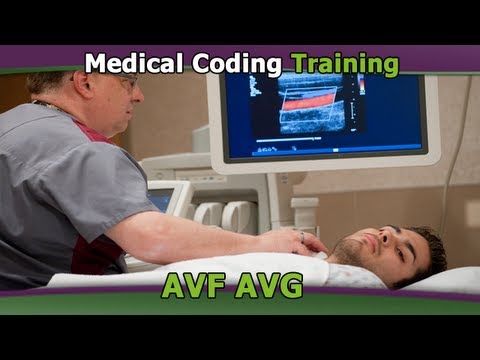 Alicia: And so what we found here was this article on what upper extremity vein mapping is, and that’s a link, Laureen. You can click on that real quick and the article is pretty interesting. It is long but again, if you’re not familiar with it at all, this is a good place to start. It breaks it down in each little process and more or less, from a clinician’s point of view on how to do it. But again, as a coder, you need to know what they’re doing so that you can get the best code. You might take some time to look that… this is an older article. Again, if this is 09… but it was really, really good. So…

Laureen: Yeah, not so much for coders, but it does help you get a feel for what they’re doing.

Alicia: Right. And it gives you the verbiage too. Sometimes, that’s all you need to get in the right direction. So what are the codes for vein mapping? These are HCPCS codes for anyone that’s new to coding and aren’t as familiar with them. HCPCS codes aren’t talked about as much, and actually not as much in the education aspect. Because on the CPC exam, there’s only 5 CPC… I mean, the HCPCS questions. But that doesn’t mean you don’t need to use it. But this is a classic example of what you learn once you’re certified and you’re out in the field. You’re going to be using HCPCS more often.

So the code, G0365 is the code for mapping the veins in the extremity for hemodialysis access. And that is actually verbatim what the code reads. I went in and pulled it off the Supercoder to verify.

Okay, now, I am not positive about a code that’s used… a CPT code versus a HCPCS code. The HCPCS code tells them what is being done. But I did find this code that is about the access point after… and this is the way I understand it so you need to verify this, double check it, do your research when you’re looking into this, because I’m not familiar, but 93990 reads “duplex scan of hemodialysis access including arterial inflow, body of access and venous outflow”. So what that’s telling me is they’re doing the duplex of the ultrasound skin and, duplex just means they’re doing it in grey and in color. And they’re doing the ultrasound skin to verify that the hemodialysis access or that access where the person’s going to have the hemodialysis done is working properly. Is there good flow intake? Do we have good movement of the blood so that when we do dialysis, it’s going to work? This…I don’t think is the proper code for an ultrasound ahead of time.

The AMA guidelines also had a note here that was in the Supercoder that we used for measurement of hemodialysis access flow, using an indicator dilation methods, etc., etc., 90940. So that’s different. Now so 93990 is saying: “let’s do the ultrasound”. Let’s make sure we’ve got good flow, good movement. And then 90940 is: ” let’s measure the flow”, which is an additional procedure that’s being done.

Want to see it being done? 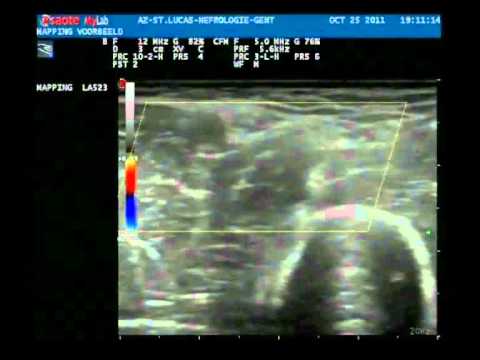 This link right here is… was pretty good.

This is one that was actually … they’re selling products. But it broke it down for the physicians and listed the codes for reimbursement. It is a little bit older. It’s not up to date. It wasn’t in 2013 but I found it very interesting because again, like I mentioned when Laureen was doing those, sometimes, when you just have a code to look at, they get you in the right area to confirm that you’re using the right verbiage, there’s not something missing… that’s all you need to be put in the right direction. And I know if any of you guys have been coding for a while, you may just look and look and look and you can’t find it. And someone says “Oh by the way, check out 90940. I think that’s… it’s going to be close to that.” And you have to be very careful with [ICD 9], it’s either one or the other. CPT, one word can change it for you. Again, like 93990 is the ….is almost the exact same thing as 90940. But one is for measurement and the other one is just checking the flow.

So if you decide that you want to see them doing a duplex scan, this ultrasound, this YouTube video I found actually shows what that looks like. [Ed. Note: http://www.youtube.com/watch?v=YytiftqCKKk ] And it’s about 11 minutes long but it’s worth it. It’s kind of interesting, but if you look right there, you can actually see what they’re looking at. That’s the artery and he talks about that. And he’s going to show you how he measures that ,and then he’ll put the color in and everything. It’s worth it to look at.

If you see the other ones, it says, “What does a…” the lady that’s 1:07 [Ed.note: 1:07 into the video], “What does a kidney dialysis access point look like?” And that’s what he’s checking just to make sure those veins and arteries are proper for that access point. So there’s some really interesting things on YouTube and again, like Laureen says, “Google it.” And you’ll find access points can be put in for hemodialysis, in the arm, in the leg, in the abdomen. I don’t… they can do it in the chest. They don’t do them in the neck but you can see them in a whole lot of different places. And without getting into a long description of the different types of dialysis that you can have, the access point is what they’re talking about.

Now,our question though, specifically, he wanted to know if… when the doctor comes out and he marks where the vein is that he’s going to do that… I don’t want to call it a port but I think of it as a port… where they’re going to plug in the dialysis, where he’s going to put that. Then actually, what they do, there’s a video for that, too, but I didn’t put the link up. It’s… they take the ultrasound machine and they use it, if you’ve been pregnant and they’ve, you know, you’ve had that ultrasound done in your abdomen to check the baby and it’s kind of like a… not an oval shape but it’s an arched shape ultrasound end. I don’t know exactly what you call that. But you can put a little marker on that and it will actually mark the vein and then they can squeeze it and it’ll put a little poke in like your leg or your arm. And then what they do is they go back and they just use a Sharpie and they literally put a Sharpie dot everywhere there it pushed, like a little indention in your arm or your leg. That’s the way they do that marking. It’s not that big of a… I don’t want to say it’s not that big of a deal. That’s not the proper way to say that. But I believe it is bundled in.

Now don’t quote me on that and we’re going to have to do some more investigation. But that’s what he’s asking, can you even bill for that? And I really, in my heart, think that it’s included in the procedure, [the doctor] going in and marking it. The ultrasound has already been done. The duplex study would have been done ahead of time to make sure there’s a good vein. And then he goes in and he knows where it’s at in the arm and then he’s going to go mark it, do a quick ultrasound and mark it, like I said, with those little indentions. But we’ll have to find out for sure. So that’s something we can follow up again later. 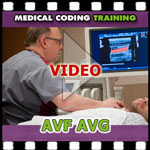