“I forgot to mention that I read online that there is a new component to the CPC exam starting June 2012. It is so new that a competitor of yours did not have this new clinical part on her CPC exam prep guide I was going to order. Can you tell me more about this and will you have this included on your most recent prep guide for the CPC. I will be finishing school this December 2012.” 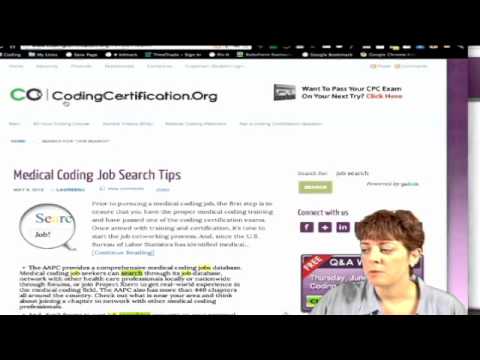 Actually, this was just a proposal as an alternative way to not have to use the CPC-A that apprentice aspect and they opened it up for public comment which I really respect the AAPC for doing and they got a bunch of feedback and the end result was they decided to keep things the way they were. The thought was they would give a 20 question or clinical additional exam to those who didn’t meet the experience requirement so that they could get rid of the A quicker.

But that never came to pass so it isn’t that my competition, whoever they are, doesn’t have it, it just doesn’t exist, its not necessary.

Again, I want to bring you back to the blog because there are articles on that and I’m trying to remember the search term, I think we ended up putting “apprentice” in there so type that in and you will find articles about that – I copied and pasted the email from Reed Pew,  the CEO of the AAPC and basically talked about how it was something that … eliminate the Scarlet A some people refer to it as that. So use the site, there’s lots of good information there. But that is definitely not going to be a reality.