Alright so this question is on thyroidectomies. It was, “I have a patient who’s having a right thyroid lobectomy done. What is the correct CPT code for thyroidectomy? Do I code for a total or a partial?” So let me go through my little thyroid spiel. This… what comes to mind immediately is think of a butterfly and there’s a picture in CPT that if you… you can kind of visualize it and it does look like a butterfly, like the 2 wings on either side and then that middle little on the thyroid. It’s called the isthmus. I always sound like I’m lisping when I talk about the deal in the middle here. 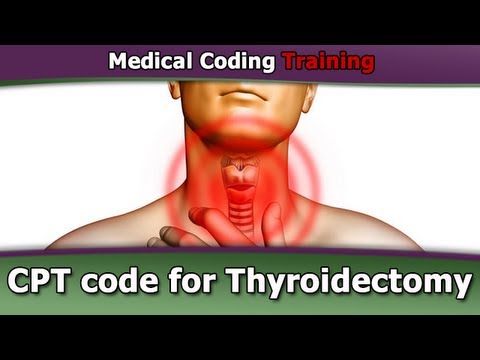 So when you look at the codes, if you think of the butterfly… because some of them will say they did you know, one lobe. Some will say they did part of one lobe and part of another lobe so let’s go through that. Now that you have the visual of a butterfly in mind with the isthmus in the middle, the first two codes are a biopsy and then an excision of an adenoma or cyst. But this is where they start for the thyroidectomy code. 60210 is partial thyroid lobectomy, unilateral and this is with or without the isthmus so with or without the middle portion.

So this is actually supposed to look like ¼ so ¼ of the butterfly is being removed because there’s 2 lobes, a right and left lobe. So they’re doing a partial lobectomy on one side. So that’s why I think of it as ¼ of the butterfly.

60220 is a total thyroid lobectomy, unilateral. So that would be the answer for your question here, having the right thyroid lobectomy done. If they’re removing the whole lobe, that’s what’s you’re going to use, 60220. And so that’s half the butterfly but it’s one side, right or left. And again, it’s with or without the isthmus. You don’t code that separate if they do it.

And then 60225 is what contralateral subtotal lobectomy. So they had half the butterfly on the right side gone and now, they’re taking a little bit on the opposite side. So I view that as ¾ of the butterfly gone. And then your 60240 is a thyroidectomy – total or complete so the whole butterfly is gone.

And then 60260, this is also called a completion thyroidectomy in that they remove part of the tissue in one operative session and now they’re coming back and removing the rest of the thyroid. So this is a thyroidectomy, removal of all remaining thyroid tissue following previous removal of a portion.

Okay and then this 60270 – thyroidectomy including substernal thyroid, sternal split or transthoracic approach so you know, obviously, many times with CPT coding, the approach will dictate which codes we’re going to use over others.

So hopefully, that is a good little overview for you of thyroid coding, thyroid surgery coding.