Let’s look at the medical term “Arthrocentesis”. By breaking up the term into two sections, we find that “arthros” stands for “joint” and “kentesis” means “puncture”. So what is Arthrocentesis?

When a healthcare provider surgically punctures a joint with a needle and withdraws (aspirates) synovial fluid (a gelatinous fluid found in the cavities of synovial joints which reduces friction between the articular cartilages and synovial joints during movement), or injects a synthetically produced anti-inflammatory such as cortisone to relieve arthritic pain, this is referred to as Arthrocentesis.

There are three (3) CPT codes you can choose for Arthrocentesis:

20600: Arthrocentesis, aspiration and/or injection of a small joint or bursa. A bursa is a small fluid filled sac lined by synovial membrane that provides a cushion between bones and tendons and/or muscles around a joint. Infection or irritation of a bursa leads to bursitis (inflammation of a bursa). Fingers and toes are considered small joints.

20605: Arthrocentesis of the intermediate joint or bursa. Examples of intermediate joints are: the temporomandibular joint which is the joint of the jaw, often referred to as TMJ, acromioclavicular joint which is also referred to as the AC joint at the top of the shoulder between the acromion (part of the scapula) and the clavicle, wrist, elbow, and olecranon bursa, also known as elbow bump, water on the elbow or baker’s elbow.

20610: Arthrocentesis of a major joint such as a shoulder, hip, knee joint or subacromial bursa (the synovial membrane located just below the acromion).

Typically, when coding for bilateral Arthrocentesis, you would append modifier 50 to one Arthrocentesis procedure code. For example, bilateral knees would be coded as 20610-50.

For multiple joint procedures, you would add modifier 59 to each additional Arthrocentesis procedure site (excluding bilateral locations). If more than one (1) injection is entered into the same site, only bill the CPT code as one (1) unit.

CPT codes 20600, 20605, and 20610 do not have a global period. If a patient sees the provider on day one (1) and he decides to perform Arthrocentesis on the same day, he would add modifier 25 to the E/M visit (separate identifiable service) and use the appropriate injection/aspiration code. If the patient returns on day two (2) for another injection to the same location, the coder should not bill another E/M visit but he CAN bill for another Arthrocentesis procedure. Only bill for the surgical injection/aspiration. If the provider knows the patient will have to return for multiple injections over a period of time, then modifier 58, staged or planned procedure, will indicate to the payer that the procedure is indicative for this particular case. Remember that coding rules change on a regular basis and you want to be sure your claim tells a story. LCDs and NCDs can affect your reimbursement if over utilized, so be clear at all times.

Procedures performed on fingers and toes must include the location modifiers. For example, modifiers TA through T9 refer to each digit on the foot.

In addition to the Arthrocentesis code, coders should always include the appropriate HCPCS “J” code to get reimbursed for the cost of the drug or biological used in the Arthrocentesis procedure if performed in a non-facility setting. The “J” code is identified by the generic name – not the brand name, but the descriptions are cross-referenced in the HCPCS code book.

Be aware that payers’ rules may vary on bilateral coding. Maintain a list of who wants modifier 50 or LT, RT. Always sequence your modifiers by using your pricing modifier first, such as modifier 50, payment modifier second, such as 58, 59 or 51, and location modifiers last, such as FA, F1-F9, TA, T1-T9. Again, pay attention to how payers handle your claims and make note. 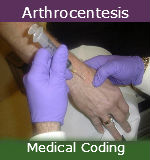