This is CPT versus HCPCS codes.

The question is, “During my internship, I’ve noticed that some CPT codes are reported to Medicare using a HCPCS code (often a G code). I assume ‘somewhere’ on the CMS site I can find a correlation of these codes, so I can write them in my book, but I have not yet. Any idea where I could look?”

That would be nice, but unfortunately, that is not the case. So, there is no universal list. I think it’s really because it is payer specific. For the most part from Medicare, if you have a code that’s similar in CPT and the HCPCs Level II manual, then you’re more than likely going to go with the one in the HCPCS or the G code. There is normally some slight difference or sometimes a real big difference, but whatever that nuances [are], that’s the whole reason. Medicare didn’t like the code in the CPT manual so they came up with their own. 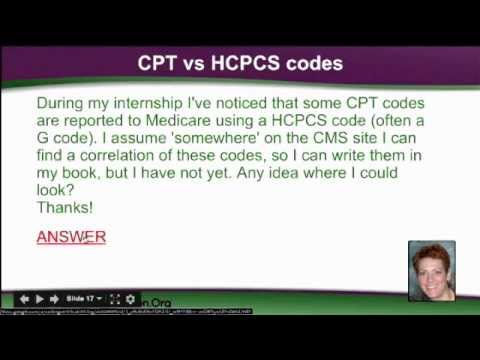 What will often happen is eventually, the CPT manual will accept the code… the way that Medicare is doing it either makes accommodations in the CPT manual. I saw that happen with the venipuncture code back when I first started coding. It used to have one that you use the G code in HCPCS, and then if it wasn’t Medicare, you use one in the CPT manual because they didn’t like the fact that a finger or heel stick was considered a venipuncture. They’re like, “We’ll pay if you stick the vein, but we’re not going to pay if you do one of those little sticks in the finger and heel,” so they had a separate code that eliminated the language about the finger and heel stick. So, that’s normally what you’re going to find.

Basically, once you get into a job working for an office, whatever, in your particular specialty, you’ll start to see what HCPCS codes are used for most of the procedures done in that office. Then, you can make a note in your CPT manual. But more than likely, you’re going to have some sort of super bill or an encounter form that you’re going to be working off that will have the CPT codes and the HCPCS code and it will just be based on payer.

One little thing I’d like to mention with HCPCS codes, many third-party payers, I mean, other than Medicare and Medicaid use HCPCS codes, but just because they use them doesn’t mean they use all of them. Oftentimes, it means they will use the J codes for the injectables and things like that, but when it comes down to those little nuances of differences like the G codes, they tend to stick with the CPT code.

So, what I recommend is that you find out who your top 3 to 5 payers are for popular procedures where you’re turn between a HCPCS code and a CPT code and go with the one that those payers tell you to use; and hopefully, you can set up your billing system to do it automatically for you to flip it. So, that was that one.