Alicia: Dental! This was really interesting and some people noticed that dental codes where taken out of the HCPCS. It’s just Mark says, “Hi! I noticed, D codes or dental are no longer published in the HCPCS for 2013. Since I do not use D codes, this is the first time I noticed. I did some Googling and in 2011, they were no longer used in HCPCS 2013. Am I correct or wrong?”

Well, it’s a very interesting story, guys. It is true, they took out the D codes or dental coding codes out of the HCPCS. And I… wow, I’m trying to remember. Yeah, it was 2011, I guess. So where did the dental codes go? They didn’t go anywhere. They’re still out there and they’re still being used but they’re not allowed to use them in the HCPCS manual anymore because of a copyright law with CMA. So the ADA is the American Dental Association, they more or less came in and said… and there’s an article that explains it in depth. The ada.org explained that, “Well, these are our codes and you’re not allowed to publish them.” So that went into effect, I think that’s the May 24th, 2011 is part of an updated licensing agreement between the CMS, the ADA. Dental codes will no longer be available through downloadable healthcare commons. 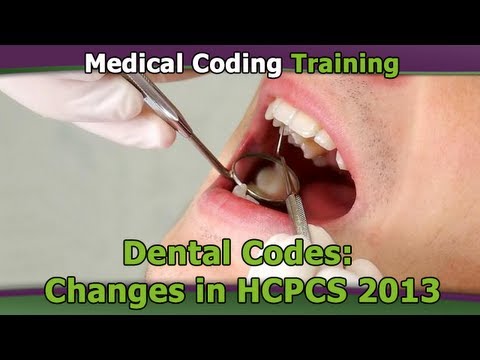 So in other words, just like the CPT coding manual, it’s a copy written book by the CMS. Nobody… you know, you’ll only see it in one version. Same thing with the dental codes. But if you go in to Find A Code, you can find the dental codes and they’re still there. You can’t find them in Supercoder. They’re not in there and you’re not going to find them in the HCPCS book.

Now there’s a link, I think. If you go back, I put a link on there for… okay, Find A Code had them. And I just pulled out a couple of them, preventative. Yeah, I think if you click on that, the… I don’t know if it’s going to take… yeah. Will it take you to that or not? Yeah, there you go. D1110. It tells you what the preventative medicine for prophylaxis which just means making sure they don’t get you know, you don’t get sick more or less. Getting a flu shot is a prophylactic treatment. And same thing with going in and getting your teeth checked as a child or an adult. Those codes are still there.

You can purchase the dental code manual from the ADA or obviously, Find A Code has gone in and done something that allows them to do that.

Laureen: They did. The Find A Code people pay a license fee to the ADA. And so when you pay for your Find A Code subscription, it’ll give you access to that. Probably the same with Supercoder. We’d probably just in our account, don’t have access to it.

Alicia: Yes or I just didn’t know the proper thing to put in there, to look it up either. But again, that’s why they’re not in the HCPCS. Your old HCPCS book, they’re there. So those are your examples of those codes.

Now, when I was doing this research though, I did find this some comments on the AAPC forum about dental coding. And this was a really interesting code that 41899 and they stated, this an unlisted procedure code for surgeries performed on the teeth and adjoining structures. Okay so in other words, when they go in and they actually do a procedure but there’s not a dental code for it. you can use this code to do that. But… and I found this information in Supercoder when I looked it up.

Now if you scroll down just a little bit… but there was a tip and this goes back to what Laureen will tell you in the lectures. When you report an unlisted code, you better have documentation to back it up. That’s a red flag for everybody using an unlisted code. So what you want to do is to make sure you submit a cover letter with a claim and whenever possible, do the op notes. Any relevant documentation needs to go in because they’re going to pull that. They’re going to review and on a case to case basis, they said to make sure that that code is allowed to be used. So keep that in mind, not just for the dental coding, but any time you use a non listed code which ultimately is just kind of a… I don’t want to say broadband but a code that kind of covers a lot of stuff. You do want to have documentation to back it up and you might as well send it in with a claim. Don’t let them reject it and ask for it. That will take too much time.

Laureen: We’re getting a couple of comments in the chat that people are running and checking their HCPCS books and they’re like, “I’ve got dental codes for 2013.” So I’m wondering if they worked out a deal.

Alicia: They may be…

Alicia: And I think 11 didn’t have it either because when… at the college when we actually taught dental coding and they had all these, workbook exercises and they couldn’t get the code. They weren’t in the codebooks. So we’ll have to follow up on that and see. That’s interesting. And again, this was probably a big brouhaha and then as the years have come by, they’ve found out ways to make their money , and be reimbursed for those codes… for the use of… compiling those codes for you, I guess is a way to say that.

But HCPCS is very interesting. It’s not used a whole lot but it is used quite a bit especially if you code for people who are over 65, Medicare patients and stuff like that. You use a lot of HCPCS codes. 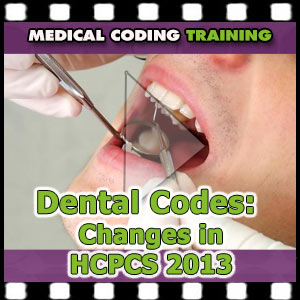