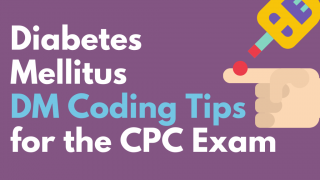 Let’s talk about the “DM” code. This is going to be the basis of most of your training for diagnosis codes.

You’re going to convert everything.

Almost every example to be given out of your diagnosis code are in diabetes. All of the guidelines and stuff seem to revolve around diabetes because there are just so many associations with diabetes. If you have diabetes, it’s going to affect almost every single organ.

So real quick, let’s go over. DM stands for diabetes mellitus. So you’ll see that a lot.

There’s more than one type of diabetes. So what are they? We have diabetes mellitus, diabetes insipidus, gestational diabetes and secondary diabetes. If somebody has gestational diabetes, that means that they probably never had diabetes before, but they’re pregnant, and after they get into the second trimester, they become diabetic. Once the baby is born, they’re no longer diabetic. Those are different codes, and so is diabetes insipidus. You need to know their differences and the different types of diabetes.

When to Use Diabetes “E” Codes?

We explained when not to use them…but when do we use them? Whenever a person has a diagnosis of diabetes, it is probably going to be coded on every encounter. You’d be hard-pressed to find something that diabetes does not impact.

For example, if someone comes in with a respiratory infection, we would code diabetes because if they are given Prednisone, the Prednisone will raise their blood sugar.

What if they stub their toe? That can be related to diabetes because diabetics don’t usually heal as quickly and diabetics often don’t even realize they have a foot injury because their feet go numb. This can lead to infections because of the poor circulation in their toes which can ulcerate and take longer to heal. If untreated, they’ll develop gangrene and their toes could be amputated.

What if they fell down and broke their wrist or tripped on ice skates? Colles’ fractures are common. You stick your hand out to catch yourself and you fracture your wrist and you’re diabetic. This is related because diabetics don’t heal as quickly.

So yes, diabetic diagnosis can be quite pertinent. We would be hard-pressed to find something that diabetes does not impact on an encounter so just about everything will probably get coded as diabetes. Any questions about diabetes codes? Ask your question below in the comments. We also have a lot of YouTube videos on the topic.