One of the questions that we get from new students is knowing when you can and cannot perform diagnosis coding. I think a lot of students, as soon as they learn how to look up codes, they are ready to code everything that they see. And every new student does it. I remember I did it. I wanted to call myself a supercoder because I wanted to code everything. It’s fun to code. But you can’t do that. You need to code only definitive diagnoses and they can be hard to identify.

One of the things that you have to stay away from is equivocal language. When we say equivocal language, that means it’s kind of on the fence. It’s not a definite. It can go one way or the other. You have to stay away from that type of verbiage. Impending or threatened conditions, you’ll see that, but that can be tricky. You cannot code something if it has not happened yet, in most cases. Now I know that sounds again, a little ambiguous, but if your physician documents, for example, we’ll scroll down here just a bit… impending rupture of spleen due to enlarged spleen. 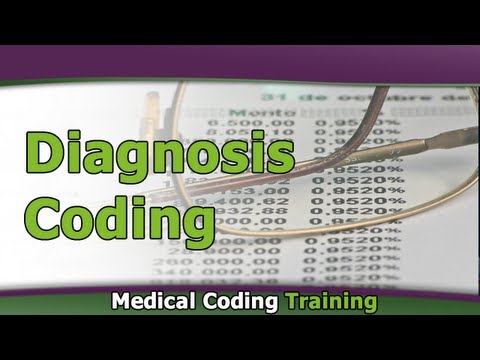 They’re pretty sure it’s going to happen but it hasn’t happened yet. So you cannot code a ruptured spleen. You can only code the splenomegaly which is an enlarged spleen, 789.2. That’s the proper code to use. Now I’ve got some more examples for you, so we’ll scroll down and look at some of these others.

Okay if your physician documents something like this – Mrs. Jones is seen today with lower abdominal pain and spotting. I will admit her for a threatened miscarriage. So you’re now saying to yourself, “Well, she hasn’t had a miscarriage. It hasn’t happened yet.” But in actuality, there’s a code for this because it’s such a common event. You can, however, code 640.0 and you’ll need a fifth digit. It does not matter that the miscarriage has not occurred yet. There is a code for a threatened miscarriage because that is a medical condition. If there had not been a code for that then you would have to code the signs and symptoms, just the spotting and the abdominal pain.

Okay, we’ve got some more things to look at here, words that you want to pay attention to. “Possible, maybe, suspect, rule out, probable, expect, apparent, perhaps, conceivably, plausibly”. Now if you’re coding and you’re coding in an office that you have repetitious documents from specific doctors and you see them all the time, you’ll learn what verbiage they use. But if you’re doing something like remote coding or multiple physicians, it may be a little harder and you have to kind of get to know how they like to document, how they like to word things. These are some words that just popped up in one day of remote coding that I was doing and it gets to be kind of humorous sometimes where you have to do a second take and say, “What did they say? They said maybe?”

So scroll down just a little bit more. I’ve got some more examples. Okay, these terms mean your physician does not know or is waiting for more testing. If the statement is made, this is another little case – Mr. Green has been feeling tired, thirsty and is making frequent trips to the bathroom. It’s apparent he has DM since his father and mother both had DM by age 50. We will draw labs today. He is to return in one week for the results. Now, the fact that he said it’s apparent he has diabetes, he didn’t actually say that he has diabetes. He said it’s apparent that he has diabetes. And then he confirms that he’s not sure because he’s going to do a test and have him come back for the results. You have to be very careful. If you gave this gentleman diabetes with the way you coded, it’s going to follow him for the rest of his life. And he could have problems in the future, maybe even getting jobs or life insurance policies because they do look at your medical information to determine stuff like that. So you have to be very, very careful. He might just have a bad cold and be real thirsty.

Okay so another example. Mr. White is seen today with some ascites and a chief complaint of dyspnea. He stated that he had been waking up at night with a dry cough. He has a history of CHF and microvascular spasms. This is probable for cardiomyopathy. Physical exam reveals mild ascites, tachycardia, peripheral edema and cool extremities. Previous diagnostic testing was… scroll down just a little more… was reviewed, was confirmed cardiomyopathy and tell, he said, which confirmed cardiomyopathy. You’re not allowed to code that because he doesn’t have it until he stated, he confirmed why he was suspecting cardiomyopathy. But all the verbiage before that was all suspect.

So pay attention to the details and your documentation. Don’t ever jump to conclusions and it’s very hard when you first start out, not to jump to conclusions. It’s going to get you in trouble when you’re testing especially because some of those questions are specifically written to see if you’re paying attention. I know if I wrote a test question, that’s like throwing in not in a test question. How many people are not feeling well today or something like that? So pay attention. Those little words will catch you.