Q: CPC, CPC-H and CIC – What is the difference between a CPC and CPC-H medical coding work and the new CIC?

A: The CPC demonstrates your knowledge in CPT, in ICD and a little bit of HCPCS. It’s geared toward those working in physician offices and outpatient, but mostly physician offices. CPC-H is the outpatient hospital credential, that’s why they’re going to be renaming it as of January 1st to the COC (Certified Outpatient Coder) to really make it clear that that’s for outpatient.

I remember myself when I took the CPC-H, I studied the volume III codes, all inpatient stuff. When I took the exam, like, I didn’t even go to volume III because it was outpatient. It was not very clear, and I was on the board back then, the AAPC board and we had our little committee meetings, we get together. I’m like, “You’ve got to do something, the ‘H’ people think it’s inpatient. I did. I studied for it. I waited to take it because I thought it was inpatient.” So it’s outpatient, so that means the same skills that you need for CPC plus outpatient reimbursement knowledge; understanding CMS is reimbursement methodology.

Boyd:     Did you pass your CPC-H, by the way? A lot of people are asking about that.

Laureen: I don’t think so. I haven’t heard from them. I did call her today because I knew… Let’s just say I didn’t pass.

Laureen: I love her with her southern accent, she goes, “I can’t believe I passed.”

Boyd:     See, that’s just a shoutout to everybody, it’s not about just hanging up and not doing it anymore, it’s about keep on going and not giving up.

Alicia: Just so you guys know, Laureen and Tammy were asked to beta test the exam. Not everybody got that opportunity to take it.

Laureen: So maybe I helped to make it easier [laughs].

Alicia: [Laughs] You know what I mean? That’s pretty cool that they were offered to beta test it. 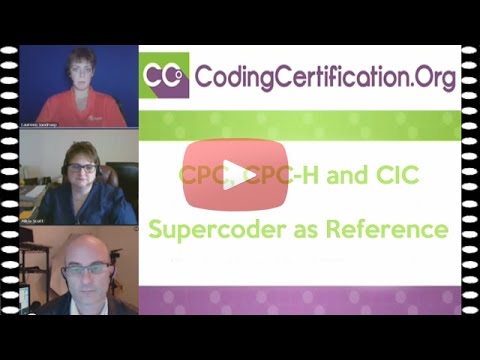 Laureen: It has been many, many years since I’ve done inpatient. I took the CCS and passed it.It took me two times, that’s why I tell everybody when they’re like, “I’m going to take the CCS and then the CPC.” I’m like, “Oh no, you don’t want to do that.” AHIMA is a very good organization, it’s not that, it’s just that the CCS is that hard. We’re kind of developing a nice little grid that we’ll be sharing soon of the different competencies that you need for each credential, so the CCS, the list is huge – huge, huge, huge – and they throw in pharmacology and this and that. It’s a tough exam. So, those that has their CCS…

Alicia: And they don’t let you take it twice.

Laureen: No, you can, you just have to pay.

Alicia: Well, right. You don’t get a free retake, I should say.

Q: Reference Tool – You mentioned SuperCoder as reference, is it AAPC coder tool?

A: AAPC, I believe, has their own encoder. I love SuperCoder and FindACode, different reasons. Like, today, I was doing some research on something and I like SuperCoder because sometimes they’ll throw in a nice illustration and they’ve got really good articles. I like FindACode because it got a really good layman’s explanation of what’s going on, so I use both. Now, most people, they don’t want to spend money on two, so I would do a trial of each and see which one works better for you. But it’s just basically an online lookup tool for diagnostic codes, CPT codes, RVUs, CCI Edit.

Alicia: It does not replace your manuals.

Alicia: You get real up close and friendly with those manuals. But the other thing I was going to say, I agree with Laureen. I turn to FindACode because it works really well for explaining things to the student especially ones that don’t have a lot of medical experience.

Alicia: Clinical experience. They’re “Aha!” And then they get it. But the AAPC, I know they’re really wanting to get their name out there for having one, so if you contact them they’ll give you a trial period of that.

Alicia: I think they’re wanting some really good feedbacks, so you might want to give it a try.

Laureen: It doesn’t mean every single question that’s pending – I mean, I’m seeing a humongous list. So, what we encourage you to do is to go to the discussion board, /forum. Post your questions there. We don’t always get them, someone today said, “You know what, you never answer my questions that I feel so bad.” If that’s the case, we’ll try and do better. Send us an email and we’ll really try. We do try and look for ones that we feel we have a wide appeal that can really benefit those that are getting ready to take the board exam and real-life coding situation, like, the 59 [modifier thing]. So we’re trying, it’s just so much that we could cover.

Boyd: There is no CCO Q&A webinar in December just for everybody.

Laureen: Yeah, we’re going to take a little break and spend some time with our family and not have to do all the post work that happens after this webinar.

Alicia: That’s the first time in what? Two, almost three years that Laureen is skipping a month.

Laureen: Yes. But you know, we need a little break, so hopefully everyone will understand it. We’ll be back in January and we’re very grateful for any word of mouth that you can send our way. So, thanks everyone! Have a really good night and safe end-of-year activities.

Boyd: Absolutely. Thanks everybody.

Find out Related Details about CPC and CPC-H Medical Coding