I think Tammy has some information that she can share for not only the differences in the two credentials, but Tammy, you might mention about people who have the CPC that think they want to pick the “H” – that will be another thing to mention too, because it’s not like you’re a CPC and you say, “Oh, I’ll just pick up the H,” it’s a little more in-depth than that. Here’s what she had put in here earlier. See how pleasant and pleased this coder looks? I thought that was good slide.

Alicia: There’s a little bit of a delay in there, Tammy, when I move the screen it will move faster for me than it will when you see it.

Tammy: OK. First, let me answer the question. I get asked all the time: “What credential should I sit for?” And here is my standard answer: “I don’t know, which one do you want to sit for? What is it that you wanted to do? If you’re telling me that you went to school and you focused on the hospital setting, then why not take the hospital credential?”

Now, you mentioned the CPC and the CPC-H, both of those are core credentials through AAPC. There’s a little bit of difference between the two but not a gigantic amount of difference between the two. Do a lot of people have both? Yes, because once you take the first one, whichever one it would be, the second one is ten times easier to take because you’ve already studied for 80% of it; so it makes it really, really easy for you to do that. 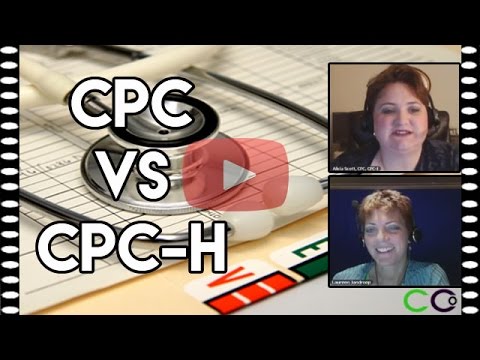 Like Laureen and Alicia just talked about, the CPC was focused more towards the physician’s office. The CPC-H is focused more towards facility outpatient, and the biggest difference in that is a little bit of usage and modifiers. We don’t use modifiers in the facility like you would in your physician’s office. AAPC they expect us to understand even though we may not always have our fingers in that pie, they expect us to understand the reimbursement side of the facility coding.

So, that’s the biggest difference between the two. You do have to know some very specific reimbursement issues for the facility just like if you were studying for the CPC exam, you need to know some reimbursement issues or positions. So, it’s just a little bit of difference between the two. It’s easy to get… once you get the first one, get that second one, if that’s what you want to do. That’s great, it’s easy; it’s easy to go back to back. We’ve even had a couple of the CPC-Hers passed and then turned right around and took the CPC and vice versa. We have a lot of students now in the CPC-H side they just got finished taken the CPC-H course. Go where your heart is, if you want that facility, then take the facility first; and then if want to add the CPC then who’s to stop you from taking it. Look, you can take as many credentials if you want to, or if your pocket will allow you to.

Laureen: Or you have the energy for .. Thanks for joining us.

Laureen: The only thing that I would add to that is I saw in the chat someone who is brand new, they’re actually retired and they’re getting into the field. If you had to pick one or the other and you’re brand new, I would go with the CPC because it’s just coding. It’s CPT and ICD and a little bit of HCPCS knowledge. The CPC-H is all of that plus the reimbursement for outpatient. If you wanted to just get all the basics down, that CPC is a really good ground level credential. And then if you want to add the “H” you really just need to learn the outpatient reimbursement aspect. That’s my personal recommendation if you’re brand, brand new.

Tammy: Can I add one more, quick thing?

Tammy: Since Boyd hasn’t muted me yet. Another thing, where we live here in Louisiana, it’s very small and jobs are kind of – I’m not going to say limited, but they’re looking for something specific here. If you’re not sure – and I’m talking about looking for the CPC-H mainly because the CPC would get you in any door, anywhere – but go in there and look at the classifieds, or go on to a hospital’s website, what credentialing are they looking for? And you sort of know which way you like, want to take it. But like Alicia said, CPC will get you in the door, anywhere, whether that’s with hospitals or whether that’s with the office. It just depends on your area. Some areas are so huge they’re real, real picky and some aren’t.

Alicia:     She made a point that I was going to make and then I would add as well – yes, get to

know what they’re wanting in your area, know your market, but I know a lot of people say, “Well, they all say CCS.” Well, just because they say they want a CCS doesn’t mean that’s what they’re going to get. A lot of times especially in the smaller area, it’s been around since the 1920s, some of these people that are writing the advertisements don’t realized that there’s the CPC because they’ve always used the CCS. So, educate the prospective employer as to what are the benefits of having a CPC and/or a CPC-H. That’s part of your job in marketing yourself. Yeah, get out there, let’s see what they want and if you’re seeing one particular credential all over the place, find out why, ask around and get more information. So, that was a good slide, we were able to give a lot of good stuff with that.

Find out more information about Medical Billing and Coding Certification

AAPC – What is the Difference between CPC and CPC-H?