Alicia: COPD and Emphysema. If you’re not familiar with what COPD is and emphysema, it’s just common respiratory conditions. It is progressive and it will make the patient ultimately just have difficulty in breathing.

Alicia: COPD is actually one of the hardest, I think, ICD 9 codes to find especially for new students. COPD stands for Chronic Obstructive Pulmonary Disease. It’s 496. If you’re going to memorize a code, that’s a good one to memorize because it is hard to find. Emphysema, 492.8 and asthma, 493.20. If you noticed… sorry, I spelled that wrong, didn’t I? If you noticed that, all those are 49 codes. When you get into coding, they all follow a numerical pattern which, as you do them more, you’ll notice that. So these are 400 codes is what we call them. 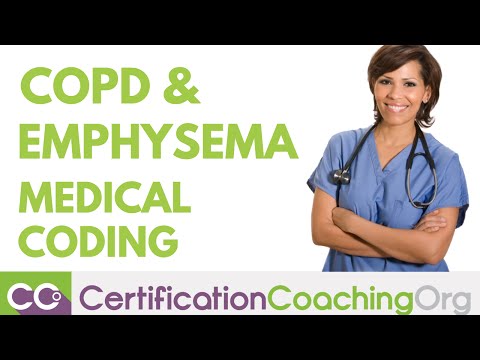 COPD, you may have heard it again as Chronic Obstructive Pulmonary Disease or Chronic Obstructive Asthma which means the airway swells and narrows. Chronic Bronchitis is a constant cough with mucus actually, and emphysema which is the destruction of the lungs over time. The Chronic Obstructive Asthma and chronic bronchitis, that can get better and get worse. But once you progress where the lung tissue is actually damaged then they state that it’s emphysema now. So a person can have COPD that turned into emphysema. Sometimes in the documentation, you may see both. Emphysema trumps COPD and asthma.

Common medications used for COPD patients, you’ll see these a lot. Bronchodilators and inhalers and nebulizers. Let’s see, the corticosteroids, you’re going to see those a lot. The theophylline, albuterol, atrovent, combient… you notice how the names all sound kind of the same? That Serevent, I see that. Spiriva, that’s a new one. You may have seen that one actually advertised on TV because it’s a new one. Prednisone, a lot of patients that are… that have difficulty in breathing are put on prednisone because ultimately, it’s an anti-inflammatory but it kind of dries out those tissues, as well. Often, your patients are going to be on O2 and generally, it’s continuous O2. So that’s one of the things you can look for in your documentation to confirm that your patient has COPD.

There are some diagnostic tests that are performed. The chest x-ray, of course, is going to be your most common. CT scans of the lungs, these ABGs, arterial blood gasses and that’s usually what they do is they go in at the wrist and feel and draw blood with a needle straight up and down. They’re going to hit an artery, not a vein so then it’s a little bit differently. They want arterial blood because that’s the blood that has the most oxygen in it. and they want to see how much oxygen or gasses are in the arterial blood.

Symptoms of COPD, you’ve got hypoxia, shortness of breath, dyspnea, wheezing. There’s a persistent cough. You often have sputum production, chest tightness and patients are tired. This hypersomnolence, I think that’s always funny. It’s being sleepy in the daytime and that’s very common for people that have breathing problems.

One thing that’s not written here that is common, if you’ve ever worked with people that have COPD especially emphysema, they’re very cranky. It’s even documented sometimes where it’ll talk about their anxiety and irritability and stuff. There’s just something about not being able to breathe makes you a very cranky person. So I just thought that was interesting to add in there.

When you do pulse ox’s (pulse oximetry) and I know some of you may not be familiar with that. But if you ever go in the hospital and you see something taped to someone’s finger and on children, sometimes, they’ll put it on the toe. And now, in doctor’s offices, when you walk in and they check your vitals, they just clip you know, they just put this little snappy thing on your finger and it will show you your pulse ox right away, the oxygen and actually your pulse. If you are on room air and you’re at 95 or less, that’s not a good thing. You want to be as close to 100 as you can get. People on room air usually are not at 100. They’re usually at 97, 98, sometimes, 99. But you put oxygen on them and they jump up to 100. And that’s what you want to see. But if you’ve got somebody that comes in with a pulse ox or you see it documented and anything below 95, especially like 80’s and stuff like that. That is somebody that’s in distress. You’ll see that. That’ll be documented.

Those are some additional things to know about people with COPD, signs and symptoms to look for when you’re coding. As we scroll down just a little bit more, I think I have an example.

Oh physical exams, diminished breath sounds. Now this… when you’re looking at a report, these evaluations, this is… Laureen was saying a minute ago about the E&M coding. Each one of these things are things that are going to be listed in the physical exam. You’re going to see notated, diminished breath sounds, rhonchi, crackles, wheezing, and barrel chest. That’s actually when the chest is kind of distended. Pursed lips when breathing and you’d have to see it kind of to recognize it, I guess. But purse your lips like… not like you’re going to kiss but like you’re frustrated or something and you’ll see it. It’s because they’re struggling to get air in. Active use of accessory muscles in the neck and you’ll notice… if you… this is something you see in children when they’re having problems breathing. You’ll see their little necks flare out and their nostrils… their nostrils are literally flaring out. You can hear them sucking in air if you can see me and trying to get that air in.

Another thing that’s not common knowledge, I think, unless you’ve been reading a lot of reports or you know something about COPDers but they get clubbing of the fingers. And you’ll see that noted. What that is is their fingers… well, the best way… go Google a picture or go on YouTube. But it looks like the end of their fingers where their nail is, got hit by a hammer. So it’s smushed, it’s fat. And it’s almost like a cartoon thing and so that’s a sign of people that aren’t getting good oxygen supply. It’s really interesting. So a doctor can walk in and physically just scan a person and almost tell if they’re having trouble breathing by their appearance, looking at their hands, seeing if their nostrils are flaring. They don’t even have to listen. They can almost see that.

On the CCO forum, we did hear… oh I guess it’s a few weeks ago now. There were some really neat YouTube videos with actual sounds of what it sounds like to listen to a person that has rhonchi or the wheezing. And I don’t remember where I put it. I may have put it in one of the specialty ones. I didn’t put the direct link on there. I just direct them to the forum.

Alicia: And it was interesting, really interesting. It’s not, if I say rhonchi, you don’t really know what that is until you hear it. But once you hear it, you’ll recognize it and you’ll think about it when you’re coding. “Oh he said rhonchi. I know exactly what they’re talking about.” So it’s very important as a coder to understand what these words mean because it’s going to make you a better coder. It’s going to help you pick up on the terms and the signs and symptoms that you need to get the best possible code.

Laureen: Great. Here you go. You do love your diagnostic stuff, don’t you, girl?

Alicia: Oh I do, I do, I do. Laureen is… she’s the queen instructor and she is the… I guess you could say the queen bee of CPT. But I like diagnoses. 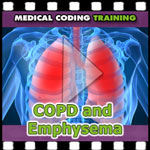