My turn! I just had some information taught to the HCC coding place I work about the EMR vendors and I just thought that was pretty relevant, too, to what’s happening out there and someone had asked about EMR vendors. Real quick, the EMR stands for Electronic Medical Record. EHR stands for Electronic Health Record. They’re sort of one and the same and interchangeable, but a lot of times, the Electronic Medical Record, I think, that’s used more for individual encounters and the EHR is your overall health record. For like a year, I could have gotten those mixed up a little bit but I see EMR much more than I see EHR, so just know that they’re interchangeable. They more or less mean the same thing. 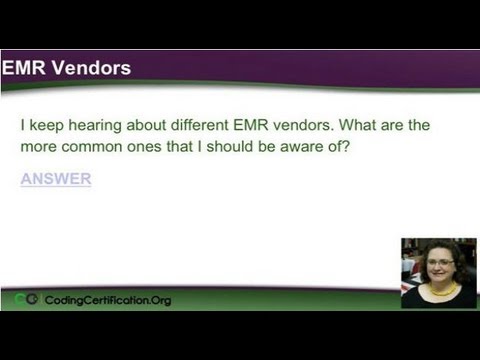 Now, the reason that we’re going this way is because of the government, actually. Congress had included the incentive program for Medicare and Medicaid to give money. Actually, it was all about jobs and stuff initially, but to make health records more accessible to everybody and so there actually are penalties now since it’s a law if you are not switched over. If you take Medicare and Medicaid reimbursement for your covered patients and if you fail to be set up with EMRs by 2015, there’s a hefty penalty for that.

So, in turn, what they’re doing is the sooner you get that done, they’re actually giving you money incentives to have it done per physician. Some of the advantages of EMRs – and you can hear people talk about this – is they can be formatted to the needs of the provider. You get the software and let’s say you’re working with an urologist and the diagnoses in the past are very important. They can actually have diagnosis and plan listed at the top versus at the bottom like you usually see in most records. The SOAP [Subjective, Objective, Assessment, Plan] format is kind of thrown out the window. It doesn’t really follow in the EMRs. But it’s easily identifiable formats so you can look at the urologist and see the format they’re using and the cardiologist is using another, or if they’re using Epic or they’re using the same software that you’re using maybe that it can be sent electronic which expedites the patient care.

It does expedite and helps with patient care. Patient information can be pulled from previous visits. It’s at your fingertips. My daughter just went in because she thought she broke her ankle and they were able to look at her x-ray from a year ago. In the past, when I was working in ER, they had to go down the medical records and pull that and then bring it up; go find the picture, and actually you had to keep those films. And so, they don’t have to do that anymore.

Now, there are some disadvantages to EMRs. One, it’s very expensive to get your system and the software set up. There is nothing cheap about that software. And security concerns. If someone leaves their computer unlocked, walks away from their desk and someone is computer savvy, can someone come in and print off your entire medical record within a minute? Yes they could.

There’s a learning curve. What if you have Betty, the nurse, who has been with you for 25 years and she can barely type, and now she has got to type in all your diagnoses and stuff and type in the histories where she used to write them and that’s not going to make Betty happy.

Also, copy and paste. This is like we said about the bane of coders, and I can tell you as an HCC coder I read charts for a patient for two years at a time. I read every encounter. Everything that has happened to that patient through those offices… through the hospital visits for a year. And I can tell you that one encounter after another will look exactly the same because they’ve copied and pasted the information.

Now, that as a coder is very difficult because in the past I couldn’t even code from a list because it could be copied and pasted. They’ve released that a little bit where I can code if I can prove it’s a current diagnosis. But if they come in for an earache and all this past medical history is talking about all the stuff that’s not related, it defeats the purpose of the medical record in that encounter.

Some of the names that are most common in EMR software and these were given to me in this order and it’s about from the most popular to the least used at this time. This could all change but Epic/EpicCare seems to be one of the biggest. So, when you hear EMR, you usually hear Epic. I see a lot of that. NextGen, Medplus, Amazing Charts, I really thought that was really a cute name. I did some Amazing Charts the other day. AllScripts, McKesson. I use McKesson when I work in the ER all those years ago and you can get EMRs to them. eClinicalWorks, AthenaHealth and I think that’s true. I keep calling it Aetna but it’s not. I think that has something to do with insurance company. Cerner. There are some others.

There are some really cute names in these. I think Amazing Charts happens to be my favorite. If we scroll down there’s about – I don’t know I think there’s 20 of these. GE Centricity, InteGreat, Practice Fusion. I don’t know that I’ve never even seen a Practice Fusion chart but each one of these charts you can almost look at them and you know. I immediately know that’s an Amazing Chart format. That’s an Epic Chart format and McKesson.

That is an advantage. You know where in an instant to look for the information. You know where the signature is going to be. You know where the patient’s date of birth. All that information, if you’re familiar with that, you can flip through those charts so quick because you know where everything is at. And that’s just a little bit of a highlight about EMRs. I’m sure we’ll have more education on those in the future because it’s a way of life for coders and professionals now. You won’t be getting away from EMRs.

Laureen: Yeah. Pansy is saying that her next local chapter meeting, they’re going to have a speaker on Telehealth and how it will be affecting coding, so, she’s relating that to the EMR discussion.

Laureen: And I don’t know if you know the answer to this or if we need to do some research but Inge is asking about what happens with doctors who don’t take Medicare at this time? Will they be able to get the reimbursement for going to EMR in the future?

Alicia: I believe they can. But they have, well, I did some work with a little tiny town, like, One-Horse Town here in Texas and it was a doctor that was going to retire in two years and everything was written by hand. The receptionist did all the transcription for him and they had just said he has no intention to go to EMRs and I said, “Well, he will be penalized as you get closer,” and she said, “Well, he’s retiring in two years and that’s one of the reasons he has no intention.”

It won’t matter for him and of course he can’t even afford the software, why would he invest on that? He’s probably not even going to sell his practice. So, that is one of the complications of that.

Laureen: I thought we should speak what I consider a myth that EMRs and EHRs are going to replace coders. What are your thoughts in that?
Alicia: Absolutely not. In fact, I think I already answered one question about that. We talked about that at the Orlando Conference because that’s scary. How they were saying transcriptionists are going to be on the outs and stuff.

They can’t replace coders because a computer can only think analytically and the computer is only as smart as the person putting the information in. So, coders may find the shift in what they do somewhat. You may become more of an auditor, but they’re just filing templates and you can’t copy and paste. That’s already a big problem where Medicare is saying, “If we know you’re copying and pasting, we’re not going to pay you.” And so that’s what a computer does, it copies and pastes.

It’s not going to make coders go away. I think it’s going to make them needed more. I think you’re going to see more physicians in compliance and auditing. I also think that, tech stuff, they’re going to want to make sure you know Excel and some other stuff. I think I’ll get a little more tech savvy if you’re concerned about that, but definitely not going away – not at all.

Laureen: Okay. Great! I mean, I can relate a little bit. I used to work for CodeRyte who was recently, well, actually a year ago acquired by 3M and that’s CAC – Computer-Assisted Coding, and that was that was the big fear of that. Do some coders full-time FTEs* get reduced in large organizations? Yes. But, does it replace coders completely? No. Never. It can’t, because if you think of documentation, medical documentation, there’re so many nuances that a computer can only do so much and take you so far. You still need that human to kind of almost audit the computers and the EMRs.

I think what we’re seeing is a shift in what our jobs entail, but we’re not being replaced. It’s actually, in my opinion, elevating us to be more kind of an auditor level, a managerial level. Change is common. You can go back to the “who moved my cheese thing” and get upset, but it’s definitely still worth getting into coding. There’s going to be lots of jobs. It’s just the way coding looks today versus 10 years from now is going to be different. It’s going to have a lot more Computer-Assisted Coding and these EHRs in the mix, but definitely they’re going to need us human coders to help the computers along. So, good discussion.