Yes, the diabetic manifestations. I really enjoy dm coding, I don’t know why. What are they and how can I recognize them in a chart?

It’s one thing to have diabetes but if you didn’t know, diabetics tend to have other organ problems because it affects the entire body. And there’s a few manifestations that you need to be aware of. The first one you’re going to see is renal manifestations which means anything that’s happening to your kidneys, your urinary tract. So your kidneys, your bladders, your bladder, not bladders. People with CKD or Chronic Kidney Disease, they can get that because they are diabetic. These are just… this microalbuminuria, that just means they’re spilling this protein type thing. Proteinuria means they’re spilling protein. And nephropathy, not to be confused with neuropathy. This is nephropathy so that’s the kidneys. 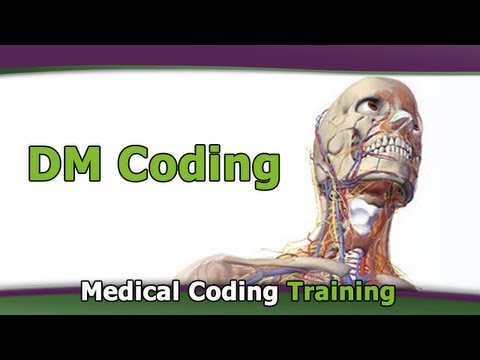 The labs, you’ll see with people that have renal manifestations are going to be BUN, creatine and CMP. The creatine, you see almost always they’re checking in diabetics. They’re constantly checking their creatine level. Another thing you’ll see is they’ll be on dialysis. And you know, they wouldn’t have to be on dialysis if they didn’t have renal function problems because of their diabetes. And that is V45.11. You’ll have to code that pretty often with… if your person’s having dialysis.

250.5, ophthalmic manifestations. When you have diabetics that start having problems with their eyes, they get cataracts and glaucoma. Retinopathy, blindness. It’s very common to have problems with your eyes if you’re diabetic. And I remember when I was working for medical records, I went to work one day and I kept looking at the clock across the room and it was blurry. It wasn’t the day before and then it was and it was just… I just knew there was something wrong with my sugar.

And I went to the doctor and I was telling all the nurses. And one of the doctors finally told me, he said… because if you’re in medical records, they’re at your fingertips. You can ask them, you know? And they said you know, if it was affecting your eyes, if you’re having problems with your sugar and it was affecting your eyes, it’s already too late. And he said, “You know, you should just consider that it’s time to get glasses.” And that was actually the problem. But you’ll see that they’ll have eye drops. But you know, I was just telling them, it’s not that I’m getting older. I just… I can’t see anymore.

Neurological manifestations, 250.6. This is where you know, this is your nerves. So people who have problems, they’re diabetic, they have… their feet ache, their hands ache. Their feet are always cold. They get tingling sensations and stuff. That is because of the neuropathy and that’s… you know, in my opinion, that’s one of the first things to go.

Now I could be wrong but as I’m reading charts and stuff of geriatric patients, it seems like… if they’re diabetic, the first things to start going is the neurological manifestations. But what some people don’t realize is this gastroparesis, that you know, that is actually… if you break the word down, gastro is your stomach or your intestines and it paralyzes parts of your digestive system. And it’s all because it’s neurological. It’s nerves. I just learned that at a webinar the other day. I had never thought about that.

Another thing is if you’re having neurological problems, you’re going to see amputations. So you know, they usually start out with the toe. And pretty soon, they’ve had 2 toes taken off. The next thing you know, they’re getting amputated at the knee. So you know, be aware of that.
Those are the 3 common drugs… that Neurontin, I see that all the time with neurological manifestation. And when you’re looking at the charge, look for the review of systems and then the HPI. You’re going to see the tingling, numbness, pain in the hands and feet. And even… there was another one that I saw the other day. I can’t think of it.

The 250.7, peripheral circulation disorders. Now the neurological remember, is doing the nervous system. Okay but now, we’re getting into the circulatory system and this, I think, happens… I would say, if they didn’t have neurological problems, peripheral is going to be either first. PVD, claudication, gangrene… and that’s when they start losing their toes.

They’re not getting any oxygen to those extremities. And thus you’ve got amputations, atherosclerosis. You’re going to see them do an AVI, angiographic doppler studies, ultrasounds. They’re going to be taking their cholesterol and their triglycerides. Because if you already have problems and then you have high cholesterol you know, if these veins are not working properly and they’re getting backed up you know, if you have cholesterol problems, that just… it just makes it worse.

Medications that you’re going to see people with peripheral circulation disorders and I’m not even going to try to pronounce that first one. Trental or let’s see, aspirin or heparin, Warfarin, Coumadin, Lovenox. All of those on that line are blood thinners. And so you’re going to see them on… they’re thinning the blood so it flows better so that they can get the oxygen to the extremities so these tissues don’t die. That’s exactly what it does. It just kills the tissue because there’s a lack of oxygen. These are anti-platelet, anti-coagulants and thrombolytics. Ultimately, they’re blood thinners.

Your extremities will have decreased pulses. So when you’re doing that review of systems and they’ll say you know, decreased pedal pulses means that you know, when they touch you on the top of your foot and he holds your foot, he’s checking to see if your feet are cold. But he’s also checking those pulses to see claudication. It kind of means you have a limp. Coldness, your feet will be very, very cold. You can’t get your feet warm no matter what you do. Cramping in the calf, numbness and weakness. These are all side effects that are a big heads up for people. If you have these problems and you’re diabetic, you definitely want to go see the doctor because you’re having problems.

Was there another one after that? Yeah, the 250.8. That’s other specified manifestations. Now all of the ones that are above that, everything before 250.8, I found out today in a webinar that I was in, those end up being chronic. So once you have a neuropathy, it’s not going away. Now, if you know… so once you start having ophthalmic problems, all of those, they’re considered co-morbidities.

And once you’ve got them, you’ve got them. You’re not going to get rid of them. You just have to treat them. Unlike 250.8. Now that’s kind of a like a little fringe of diabetic problems. These can be treated. If you have hypoglycemia and you’ve got weakness, confusion, slurred speech, that can be treated because you can usually take care of that with your diet. Osteomyelitis, antibiotics, skin ulcers… you know, people are going to have problems with… you want to look up osteomyelitis?

Laureen: No I just… correct the spelling.

Let’s see, so with all of these diabetic codes, you would use in addition the manifestation code. So if you were… if your person was diabetic and they got osteomyelitis, they would no longer be 250.00. They will be 250.80 because they have osteomyelitis and then you would code the osteomyelitis on top of that or after that.

Same thing with… if your diabetic person’s been coming into the office you know, routinely having their feet checked and stuff like that. And then all of a sudden, they came in with a pressure ulcer on their left foot, he’s no longer a 250.00. He’s a 250.80 and then you code the pressure ulcer as well. Same thing with those others with the neuropathy and stuff like that.

That’s why you want to be very aware of coding. If you don’t code 250.80 and you code 250.00, you’re not coding to the highest specificity. And also, your doctor’s not going to get paid as much because what’s paid out for .80 and .00 is two different amounts. So you want to make sure you’re very aware of that when you’re coding. And the doctor probably is not going to type in or when he writes… if he writes codes, he’s not going to write 250.80. He’ll put 250.00. It’s up to you to use the code or to know, if it’s an .80 if they have a pressure ulcer. 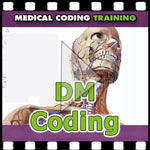